Let the past die. Kill it if you have to? 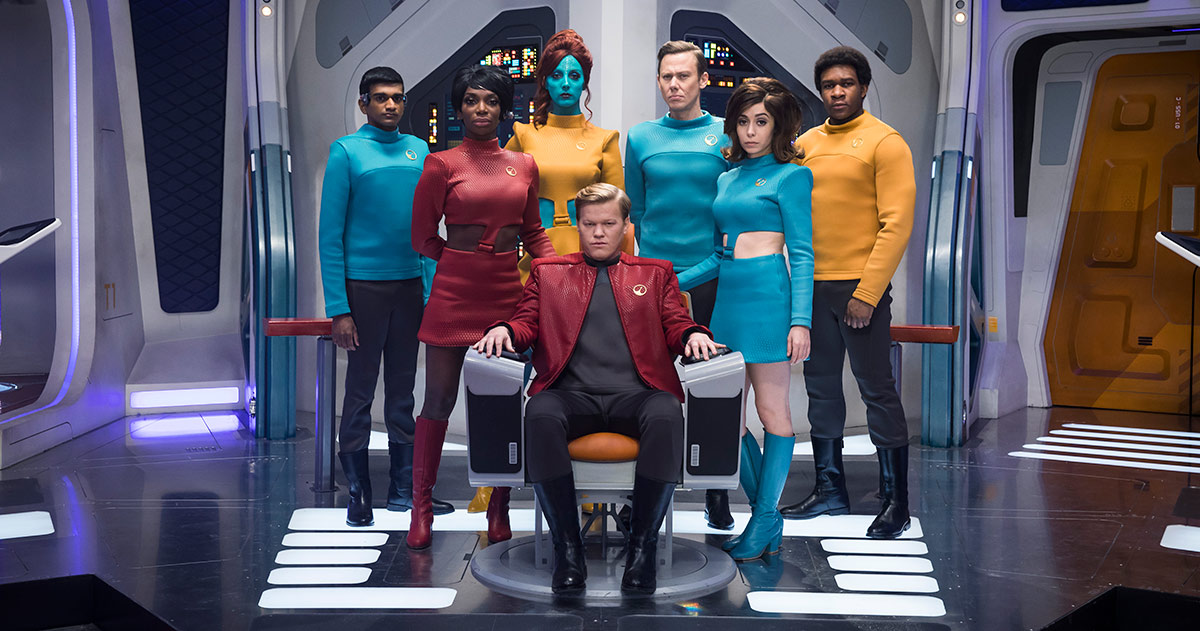 Nine PM. As I wake up from a holiday slumber filled with beer-induced, spider-haunted dreams, I set my boiler and put instant coffee in my Sponge Bob cup. Today is Black Mirror Day. Five hours and forty-five minutes (give or take) of binging is waiting for me on the Netflix homepage. The banner “new episodes” shines, red and white, and I’m looking at wide-eyed Christin Milioti’s likeness. She’s the image of the new season, featured in the first, lengthiest episode of the bunch, “USS Callister.” As a trekker who found his new calling months ago thanks partly to the oh so English Frenchness of Jean-Luc Picard, whose seven season run I binged in two months, I am as excited as you can be to watch what appears to be a careful destruction of Star Trek. I’m not awake. The coffee is not yet active. So, it takes me a while to get used to the weird aspect ratio and the tongue-in-cheek tone of the first minutes. This feels somehow funnier than I anticipated. I’m genuinely excited as the plot reveals the main idea, and the coffee actually starts kicking in.

The beauty of “USS Callister” is that it perfectly balances parody and pastiche in a way that feels true, both to Black Mirror’s mean spirit and Star Trek’s sense of wonder. The first five minutes of this episode is a delightful 4:3 ratio’ed and sexist ending of an episode from the late 50s. A team of space explorers must defeat an evil alien. Thanks to the might and wisdom of the captain, and against all odds, the evil alien is defeated, and the captain is hailed as a true male American hero, and as such is allowed to kiss each female on the ship (as is the tradition).

Finally, we’re introduced to someone who looks like the captain from the show, but is actually a balding Jesse Plemons whose life as a CTO of his own company ain’t that great. The poor aspiring sociopath lacks social skills. Christin Milioti arrives in the company, knocks on Plemons’ door to fangirl for about five minutes before she’s taken away by co-workers who tell her how much of a dorki-dweeb-nerd Plemons is.

What nobody knows is that Plemons is exactly as smart as his CTO position would lead anyone to believe. He’s developed a technology that allows him to create a replica of each and every individual that was rude or dismissing of his idiosyncrasies (Like being a low-key perv), in a version of his game that is cut off from the internet, and in which he can play out his fantasy of being the captain of his own star-ship. Because the new girl at work dared listen to a coworker who vented about Jesse’s weirdness, she’s now part of it.

And that’s the kicker. Literally, I’m standing in my bedroom/living room/kitchen/bathroom excited about what’s going to happen to real life people trapped in a nightmarish version of Star Trek.

We’re shown people whose acting style is naturalistic in a setting that has generally required nonsensical technobabble (delivered with the seriousness of a PhD in astrophysics), long, interrogative gazes cast at the event horizon (to allow for a nice dissolve for the commercial break), and hammy bad-guys in goofy-looking makeup. The characters wear the attire and hairstyles of a bygone era as they engage in rapid-fire conversations that are both witty and filled with insight about people who have been stranded in this virtual world for what may be years. All actors do a splendid job, and Christin Milioti delivers both the emotion, the resolve and the desperation that her predicament could inspire a real person.

Whenever the captain appears, the figure of the quiet and assured patriarch is subverted. This is no Jean-Luc Picard. The prisoners must play their roles as characters from the show, subservient and propelling a nonsensical story forward, victim of the captain’s every whim. Ultimately, the change in this routine comes from the new prisoner who is not ready to take any of this manchild bullshit. This serves as a main trope for some of the finest stories of this season and some of the worst impulses of the whole TV show. But we’ll come back to this.1 A white guy sets machinery in motion that a woman has to either deal with or destroy altogether.

“USS Callister” is at its best when it balances an actual heartfelt homage to Star Trek with mean-spirited jabs at the show—both the IP and its hardcore fans. A satirical hand in a pastiche glove. The meanest (and truest) hit taken at the expense of the TV show and its fans is also one of the best moments for me: when fan-boy Jesse Plemons argues about a TV show exhibiting the best moral attributes of mankind, while at the same time torturing, physically and mentally, the unwilling participants in his simulation. This is one of the best depictions of something we’re sadly getting used to nowadays: cognitive dissonance. Jesse Plemon’s dissonance is so strong that he never understands how much his actions are contradictory to what he claims is the spirit of the show. Fandom as a truly horrific phenomenon made up of loud, self-important, childish men feels like a tailor-made subject for Black Mirror and it is no wonder this episode is hailed as one of the best of the whole show.

In another key moment that subverts TV tropes, when defeating his arch-nemesis, the captain is left with the choice of showing mercy by saving the baddy’s life or killing him. In reality, the bad guy is also played by a captive employee who would want nothing more than a mercy kill, so he can be erased from this god-forsaken simulation. This is as fine an example of subversion as there’s ever been in Black Mirror, and the first proper meta-commentary is what is assuredly the most meta season of the whole run. You can really feel Brooker’s delight as Netflix expands the scope and the special effects of his toolbox, but also his understanding of how far he has come in the zeitgeist.

After a rather suspenseful attempt at defeating the scumbag gamemaster, the ending has our ragtag team of video-game engineers finally reconnected to the internet, but still trapped online, facing your average megalomaniac player, ready for a life of asexual adventures. This is as good a happy-ending as you’ll get from this horror TV show that’s also an astute exploration of terrible humans with terrible technology.

Rating: Five “blipping lights that don’t actually do anything” out of Five

I laughed, I cried, or got horrified at:

Review: THE COMMUTER Previous
Jon's Top Ten Movies of 2017 Next