We will, we will bore you. 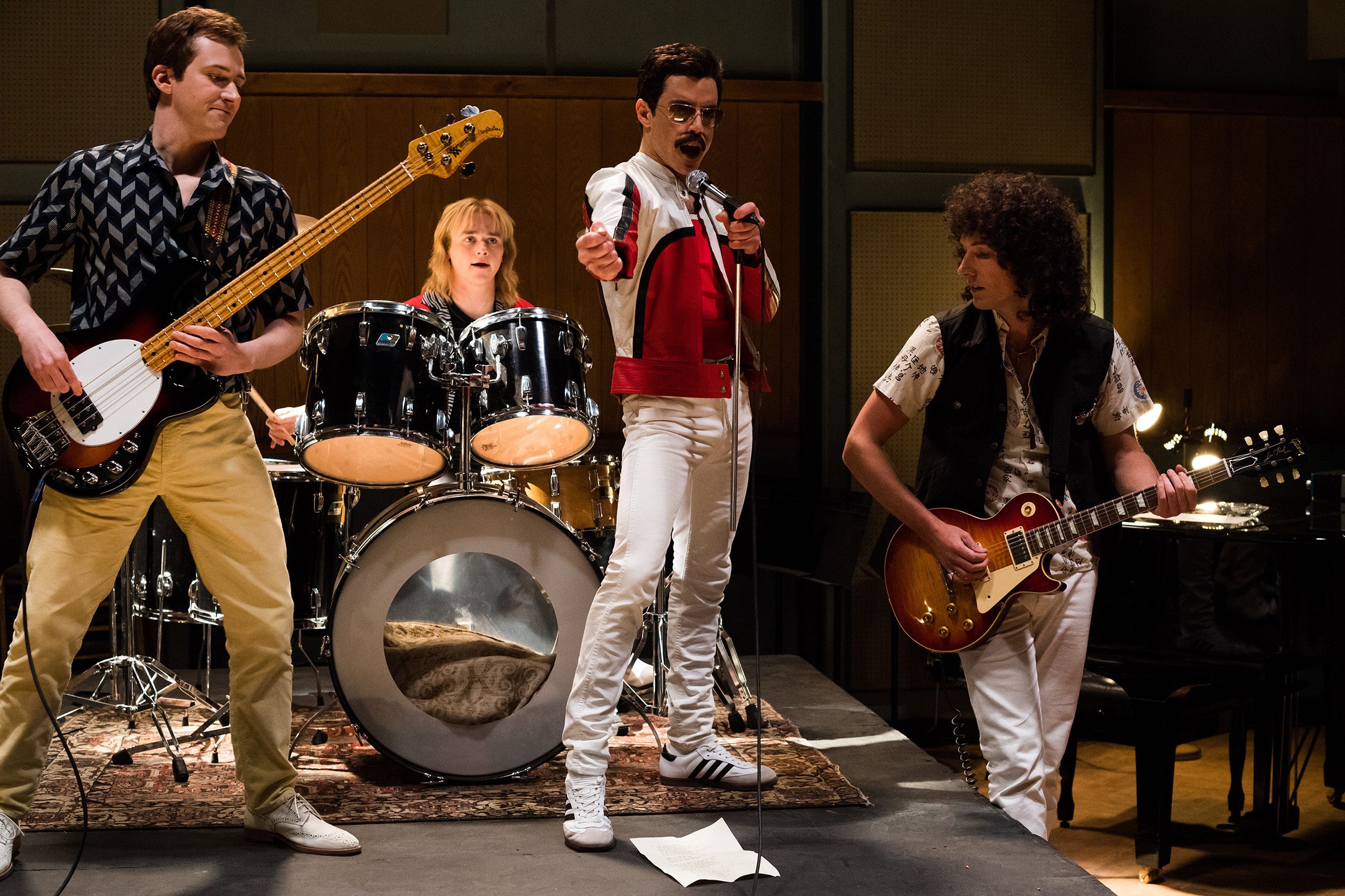 It doesn’t matter if the musician is Ray Charles, Johnny Cash, or Freddie Mercury — the formula of the movie will be the same. That said, the movies about Ray Charles and Johnny Cash were better than Bohemian Rhapsody. Or rather, they didn’t make me want to walk into the office of whomever wrote them and slap them upside their damned fool head with a halibut2 until candy comes out of their left ear.

Rami Malek plays frontman Freddie Mercury,3 and looks every bit the part. He’s also a phenomenal character actor who makes for an empathetic Mercury. You can understand why his band mates are so enraged at him and can’t deal with him, while also feeling sorry for him and his loneliness in the next scene. In fact, the supporting cast is better than one typically expects from these sorts of films, with memorable performances by Gwilym Lee as Brian May, Lucy Boynton as Mary Austin, and one of my favorite actors from the Wire, Aidan Gillen, as manager John Reed. In fact, the entire band is genuinely interesting, which is unusual for this sort of film.

Too bad about the script, though. It seems clear that someone at the studio decided early on that Mercury being sexually attracted to men had to be kept under wraps, hence the initial script not mentioning it at all. When omitting this became a clear issue that would hurt the film, the same studio decided they needed to address it, leading the filmmakers to address it in the most judgmental manner possible. The film clearly looks down its nose at Freddy Mercury’s lifestyle as if taunting him that not only is being a gay man with lots of lovers unsavory, but invited him to contract AIDS. That it’s what killed him. In and of itself, maybe the movie could pull that off, but the first third of the movie shows the rest of the band whoring around with women as set dressing or visual punchlines with no judgment whatsoever. Clearly, the writer drew a hard line; Whoring with women is cool. Whoring with men is not.

I realize that I’m writing this from a hyper-liberal elite west-coast city, and that I live in a neighborhood that’s racially integrated and I work with people who represent a spectrum of lifestyles and races and all that. But something like two-thirds of the country believes that homosexuals should have the right to get married in this day and age. Couldn’t a studio’s decision have reflected that sexual mores have changed since 1991, when Mercury died? All this would be a lot less troublesome if the characters didn’t spend half the movie talking about how Queen is about the freaks and the outcasts who don’t fit in and providing a place, musically speaking, for those who don’t fit in. Maybe in a movie about that, the studio could have provided a place, cinematically speaking, that was a tad more welcoming for people who lived a life less ordinary.

I spent a lot of Bohemian Rhapsody rolling my eyes and shaking my head, and neither of those suggest that I’m having the greatest time of my life. In fact, both state pretty clearly that I’m not.

That said, the concert scenes were pretty cool. The climax of the film, when the band plays Live-Aid,4 is a magnificent sequence both cinematically and musically. But you have to sit through over an hour of movie that’s frankly insulting to your intelligence and taste to get there. While it may be true that no man ever went broke underestimating the intelligence or taste of the American people, that sequence isn’t so good that it justifies the hour of deeply mediocre movie that comes before it. It’s a painfully dull slog to get to the good stuff in this film.

And maybe that’s the problem: Bohemian Rhapsody isn’t all that bad. It’s not so much a “what am I watching?”/”this is so bad that I can’t walk away” train wreck that you’ll find yourself fascinated by it. It’s not so bad that you’ll want to taunt the screen for it’s badness. It’s just bad enough that you’ll spend the entire time saying, “Why didn’t I watch… instead.” Which is really the worst kind of bad. It’s that deeply unmemorable kind of bad — not the sort of awful of something like The Room or an Ed Wood film might be. It’s just another piece of Hollywood garbage shoveled out into a forgettable mess of movies not marketable enough to be released in the summer and not good enough to be released for Oscar season.

But this time of the year, Bohemian Rhapsody has a lot of competition from movies that are actually good. Watch one of them.

The LB team celebrates and commiserates during last night's awards