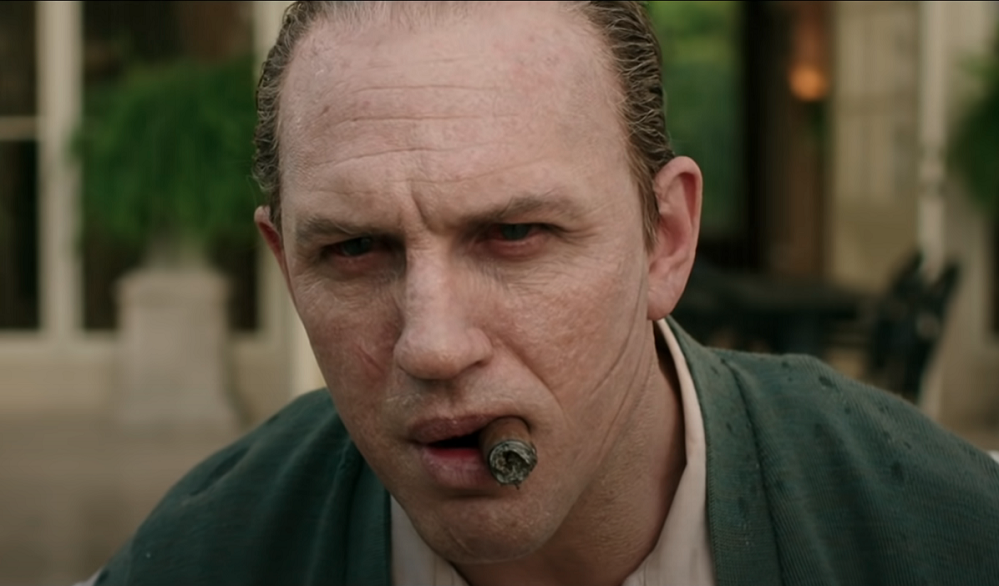 Along with my attempts at being an historian of modern warfare on film, I also take great pleasure in trying to catalog what I call The Most Gangster Ass Movies from around the world each year. This brought me to Capone, out now on digital distribution. Despite its subject matter, Capone is most assuredly not a gangster movie in a traditional sense. Instead, director Josh Trank drowns us in the experience of a domestic nightmare fueled by sickness, paranoia, disturbing imagery, and the demons of past deeds that eat away at our souls.

Trank is infamous for his short but tumultuous roller coaster of a career, going from a breakout indie success to maligned box office failure. Volatile online discourse, self-seclusion, and incredibly candid confessions followed, ultimately leading to another chance behind the camera of a production featuring prestige talent.

The headliner of that talent comes in the form of the formidable superstar Tom Hardy as the world famous mafioso Al Capone. Hardy is renowned for his ability to inhabit macho men of action as well as off kilter characters on the edge of insanity, and he pushes further here into that psychotic spectrum than ever before. The film is a fictionalization of the crime kingpin’s last days of his life in the 1940’s, gripped with the effects of neurosyphilis in the confines of his home under government surveillance. In the midst of Capone losing his grip on reality and coming to terms with his past, the plot focuses on a mysterious hidden stash of $10 million that Capone, in his dementia, has simply forgotten the location of… or so he believes.

Early on in the film, we are given strong indications that his perception is not reality. The film-making on display as we wade through Capone’s psyche vacillates between striking visual compositions, perplexing eccentricity, and a numbing drone. To the film’s credit, that drone is reinforced with a score by independent music producer and hip-hop artist El-P, a stalwart of the underground NYC rap scene who has achieved widespread acclaim in recent years as one half of the duo Run the Jewels. That said, aside from a few key moments, the score is almost imperceptible, never getting in the way of the force of nature that is Hardy.

The supporting cast is also full of highlights, the best among them being Linda Cardellini as Capone’s wife Mae. As this surrealist journey into a heart of darkness often becomes more obtuse and off-putting, we are brought back to earth with a recognizable but no less powerful domestic drama about the stress, danger, and heartbreak of having to care for a family member who is mentally and/or physically debilitated. Even though the film was completed in 2018, this depiction of home-hospice may resonate powerfully with some viewers today, as we try desperately to survive a global pandemic.

Throughout the film we see a mind in decay, a disintegration which exposes the raw nerve of a man’s soul. The esoteric manifestations of his violent past become entwined with physical expressions of disgust in his present, accentuated by bursts of gore and bodily fluids. This is to say, you may hear descriptions of Capone along the lines of “the movie where old man Tom Hardy shits himself all the time”. This is reductive of elements at play, although it is also accurate to a significant part of the text. If general audiences aren’t turned off by the nebulous dream sequences and cryptic dialogue, they most certainly will be by the moments of tangible filth. This portrayal of Capone is disgusting inside and out, with Hardy done up like a malignant animated corpse begging to be embalmed and laid to rest for his sake and ours.

With all this in mind, I ponder the ultimate point of this exercise. The conceit of finding the humanity in even the most deplorable of monsters is the most immediate conclusion and an admirable one, though I wonder if that will be enough for viewers in this day and age who have already explored the ethical quandaries and transgressions of anti-heroes such as Tony Soprano and Walter White. I also wonder if such a thing is necessarily apropos in a time where real monsters continue to plague the lives of the vulnerable at an institutional level. Even so, I am certainly sympathetic to the process of absolution, for there is much death and destruction in my past that I must atone for. Capone seems to end with a recognition of this need for resolution, but the film doesn’t leave enough time to parse whether or not he is willing or able to reach it.

At its worst, Capone needlessly obfuscates a supposedly poignant moral journey, the likes of which has been done with better prose and verve in other recent crime dramas. On the other hand, Capone provides a unique lens through which to study one of the most notorious criminals in modern history, stripped of his muscular mythology to reveal the rotting pulp within. In that regard, I believe Capone succeeds. It will repulse a lot of viewers, but others with a taste for the deplorable and an eye for the opaque will find a lot to admire here.