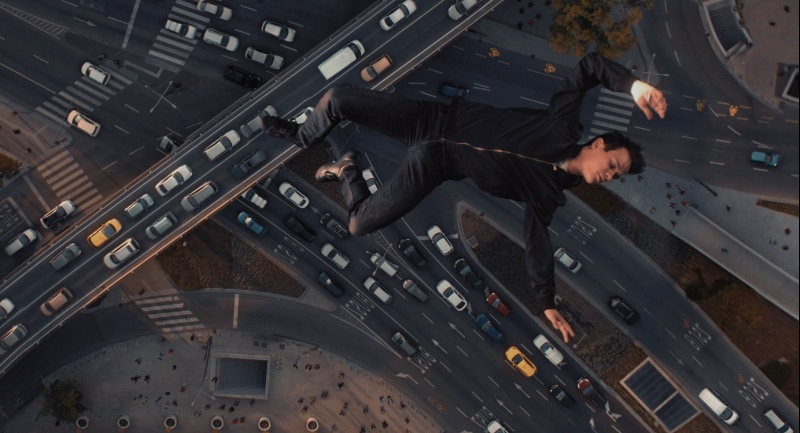 For my fourth day of Fantastic Fest 2017 coverage we have deathless samurai, refugee angels and white rappers. And a skin flick.

In previous dispatches I’ve mentioned that a number of the films at this festival could have used some extra time in the editing room. Blade of the Immortal, Takashi Miike’s manga adaptation (and 100th film), is not one of them. Clocking in at over two and a half hours, it more than earns its length. This total blast of a film follows a young girl named Rin as she seeks vengeance against the swordsmen who killed her family. To that end she tracks down Manji, a samurai who is incapable of dying, and enlists him as her bodyguard. Working on Rin’s behalf, Manji hacks and slashes his way through literally hundreds of henchmen, in the process getting hacked and slashed to near oblivion himself. The film is absurdly exciting, hilarious and displays a deft emotional touch. It occurred to me a little while back that Miike would be a good pick to helm one of the Star Wars spinoff films (his filmography isn’t totally blood-soaked, after all), and this film reinforces that opinion. At the moment it may be my favorite film of the festival.

Take it Out in Trade, Dir. Ed Wood, United States

All of that said, I found Take it Out in Trade to be interesting from a historical perspective. It’s the long lost final “masterpiece” from z-movie legend, Ed Wood. Wood isn’t the “worst director of all time” as he has often been described. His films (ignoring his joyless for-hire porno movies) are works of passion and could have only come from the mind of Wood. If his filmography just plain sucked, we wouldn’t still be talking about him. This picture is a very silly comedic detective film, packed with dad jokes and, well, boobs. At the very least, it seems like Wood is having fun with experimental editing and sight gags. Wood himself, well known as a crossdresser in real life, shows up on screen as a drag queen character. His role and the presence of a sympathetic queer married couple are probably the most distinctly Wood touches in the film. It’s not a good movie by any stretch of the imagination, but Wood fans and people interested in the history of low budget cinema may find it worth a watch.

I’m fascinated by Joseph Khan. He’s mostly known as a music video director, but every once in a while he decides to make a movie and it’s always… odd. You can read my review of his weirdo Fast and/or Furious riff Torque here. His last film was 2011’s pop-cultural rat king of a movie, Detention, which starts off as a teen comedy but ends up involving a bear that has been abducted by aliens and turned into a time machine.

With Bodied, Khan has turned his exceedingly odd eye to the Oakland battle rap scene. Adam is a lily white Berkeley grad student doing his dissertation on use of the n-word in battle rap. When his academic interest in the topic leads him to try his hand at battling, the film dives into ideas of race, gender, offensiveness, how context matters when it comes to said offensiveness, cultural appropriation and more. I was worried at first about the prospect of a fictional white kid kicking ass in a medium that is historically the domain of people of color, but as it turns out the movie is explicitly about the problems I was expecting to have. The end result is exhilarating and hilarious and (yes) at times deeply offensive. I wish Khan would step out of the music video world more often.

I went into this film pretty much blind and, as Jason mentioned in our Fantastic Fest podcast episode, I was expecting… spaceships? Jovian moons? That sort of thing. Nope. A pretty reductive way to describe Jupiter’s Moon would be “Hungary’s answer to Children of Men.” It’s a beautifully crafted genre film, reliant on single-shot scenes and remarkable practical effects work, that deals with religion and the refugee crisis. But that doesn’t do the film justice. It has other things on its mind, even if I often had a hard time putting together what those things are.

When a Syrian refugee named Aryan is shot while trying to sneak in Hungary, he suddenly finds that he has the ability to levitate (and later affect the gravity of his surroundings). Stern, a disgraced surgeon scrambling for money, sees Aryan as an opportunity and sneakily takes the kid under his wing. The story places an emphasis on Stern’s arc, and it’s an effective one. I’m less clear on where if anywhere the film lands when it comes to its spiritual themes. Aryan is described as an “angel” on multiple occasions, but we never see him do anything particularly angelic other than fly which, when compared to something like curing the sick or bringing the dead back to life, seems like a glorified parlor trick. The act is gorgeous, but I don’t see much spiritual value in it. Then again, I’m a heathen. What do I know? But Jupiter’s Moon is beautiful and absolutely fascinating. I foresee myself gladly revisiting this film, if only so I can figure the dang thing out.

That’s it for today! I’m scrambling to catch up with all these movies! More to come soon.

A day at PAC Festival: 12-hours of Arthouse Cinema Previous
The Essence of Camp, Episode 57: Top Gun Next