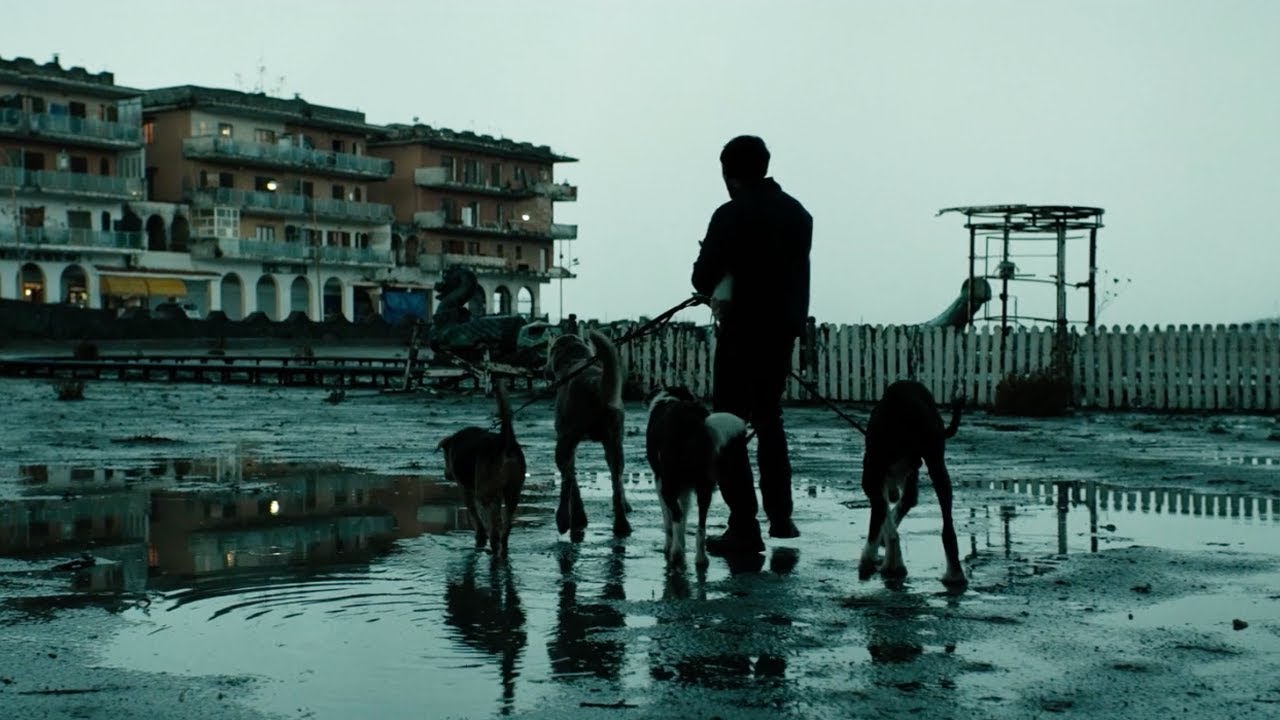 Somehow not a film about werewolves or canine-human hybrids,1 Dogman is a character study of a cowardly and wimpy dog groomer named Marcello (Marcello Fonte). A quiet, simple member of the community, Marcello is an award winning canine hairdresser and is a valued and trusted member of the business complex his shop belongs in. However, in order to provide the lavish gifts and trips to his daughter (who lives with his ex-wife), Marcello sells cocaine and does small time robberies with the violent, hotheaded criminal Simoncino. Simoncino, a large and burly man who towers over Marcello, bullies the “dogman” into using his store to steal cash and jewels from the next door storefront, which leads to Marcello being imprisoned for a year and his standing in the neighborhood to deteriorate—which leads to an escalating conflict between the two men.

Marcello himself is one of the most fully formed and downright human cinematic characters in recent memory. A minuscule guy who desperately wants to fit in, every waking thought is about how people think about him and what the neighborhood thinks of him. He falls into working with Simoncino primarily out of convenience—he wants a friend, needs a drug customer,  and is intimidated by the large former boxer. Marcello lives every waking moment of his life in fear. Fear of his neighbors, fear of disappointing his daughter, and most importantly fear of Simoncino, particularly when he begins flying off the handle. He’s so afraid of disappointing anyone and everyone that, in the pivotal scene in the film, Marcello struggles between testifying against Simoncino or going to jail himself instead—he winds up choosing the latter.

And while his personal journey in Dogman is a fascinating one to witness, it ends up exactly where you’d expect. The film’s final act is a series of confrontations between the two principal characters that increase in severity and violence. Marcello’s meek and anxious demeanor slowly turns into an unsettling cunning, and Simoncino’s lack of forethought and immediate drive to physical confrontation slowly boils into him being nothing more than a caged and chained wild rabid animal.

Fonte is absolutely remarkable as Marcello, with practically every frame of the film in service of his stellar performance. It’s not an overstatement to say that about 95% of Dogman features Fonte’s acting as the centerpiece, with director Matteo Garrone’s lens dedicated entirely to both Marcello the character and Marcello the actor. The tracking shots and long takes, unlike in many current films both foreign and domestic that focus on action, are almost always close ups of Fonte’s face, letting the subtle facial acting tell the story rather than words or action.

Another positive: Plenty of good dogs

The performance carries the film, which is, as mentioned above, pretty uncomplicated and obvious. There’s a very thinly veiled allegory about how the boot of fascism can break the weak and the violent struggle of pushing back against it… but it’s about as shallow as an above ground kiddie pool. Simoncino’s relationship with Marcello is animalistic, the alpha male dominating the weak—and yet Marcello the “dogman” can’t help but be drawn to and have an attachment to this manbeast.

Dogman isn’t a profound film, nor is it anything extraordinary or unpredictable, but it’s a film that puts all of its energy, from a writing and directing standpoint, into the lead performance. Garrone’s trust in Marcello Fonte’s absolutely stunning and palpably human turn makes what could’ve been a mess of a crime drama and makes it immensely watchable and enthralling. Fonte is worth the price of admission alone.

Quite possibly the sweetest thing you'll see all week