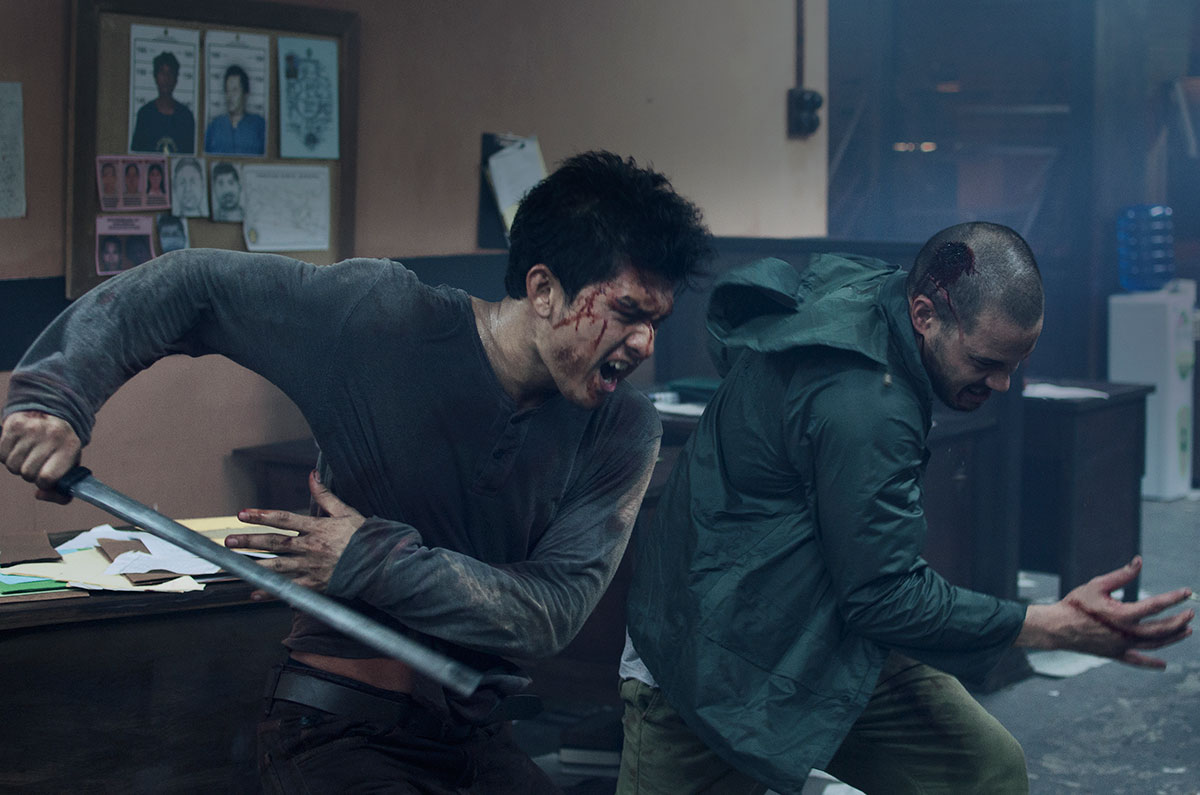 How’s this for a bad guy? A murderous criminal who abducts small children and trains them in the ways of killing. A brutal Fagin figure with an army of highly skilled and devoted assassins. Such is the villain for Japanese actioner RE:BORN. This is not a review of that film. This is a review of another movie that played at Fantastic Fest this year: the Indonesian martial arts film Headshot.

It basically has the same villain.

So, yeah, Headshot won’t win any points for originality. A brutal mixture of The Raid, Jason Bourne and 1990s John Woo melodrama, Headshot feels familiar from top to bottom. What it will win points for is execution. Bloody, bone-crushing execution.

Ike Uwais (The Raid, and a criminally tiny role in The Force Awakens) plays our amnesiac hero, Ishmael, who is found floating in the surf with a bullet in his brain. A bubbly doctor named Ailin takes a special interest in him, going so far as to sleep in the hospital room near her comatose patient. Ailin stays by his side when Ishmael finally comes to, helping him stay on his feet in his new life and and rediscover his past. The relationship between the two is clearly one of burgeoning romance, but it is also utterly chaste.

This setup is quick and sappy, relying on broad strokes and the chemistry of the leads to do what it needs to do. It’s a gamble that pays off, as Ishmael and Ailin have chemistry to spare and their brief time together feels genuinely sweet. It’s horrifying when people from Ishmael’s criminal past realize he’s still alive and kidnap Ailin in a machine gun massacre, not only because of the blood (Holy shit, there’s a lot of it.) but because we want the best for our lovebirds.

Ailin’s abduction* kicks the movie into high gear, beginning with a breathtaking fight sequence in a burning, corpse-filled bus. The action is quick and inventive, using the location to its full potential. In one memorable moment, a gasoline-doused Ishmael wrestles with a foe on the floor of the bus while trying to blow out the baddie’s Zippo. This sets the tone for what is to come, with every action sequence consisting of miniature set-pieces, each one of which being a mixture of brutality, intensity and often hilarious audacity. One later scene features Ishmael using a manual typewriter as a shield and the end result makes you want to cringe and applaud at the same time.

The cinematography leans on shaky cam at times but it’s almost always motivated and rarely distracting. The visual style lends the proceedings a vibe of illusory realism, covering up for the fact that Ishmael and his opponents are dealing out absurd levels of punishment. This is by no means a “realistic” movie, nor is it “gritty” in any sense other than being incredibly violent, but it’s directed so well that the film never veers into cartoonishness.

Unfortunately, the final few fight scenes don’t quite live up to what came before. That’s not to say they’re bad, but they feel pedestrian by comparison. They’re straight-up brawls in rather spare locations and feel like a procession of video game mini-bosses. What’s worse, they rely on completely unsold character conflict between the opponents for drama, leaving the climax a bit underwhelming emotionally. The film had built up enough goodwill by that point that it carried me through those later rough patches, but I would feel remiss if I didn’t mention them.

Headshot isn’t a perfect action film by any means, and it doesn’t break any ground, but it is a total blast and in that sense I can’t recommend it highly enough. If nothing else it’s a good way to satisfy that hunger for kick ass Indonesian action until we get another Raid film. In the end, I think I’ll stand by my initial Twitter review:

HEADSHOT just blew my damn face off. My face is gone. It's nothing but hamburger now. Holy shit. #FantasticFest

*MILD SPOILERS: The film manages to slightly subvert the “rescue the princess” trope in the end. It’s still there, but not quite as obnoxious as it sounds. I’ll just say don’t fuck with Ailin.

CREED and The Shadows Our Fathers Cast Previous
The Wars on Film: THE SIEGE OF JADOTVILLE Next