The real magic was the friends we raced along the way 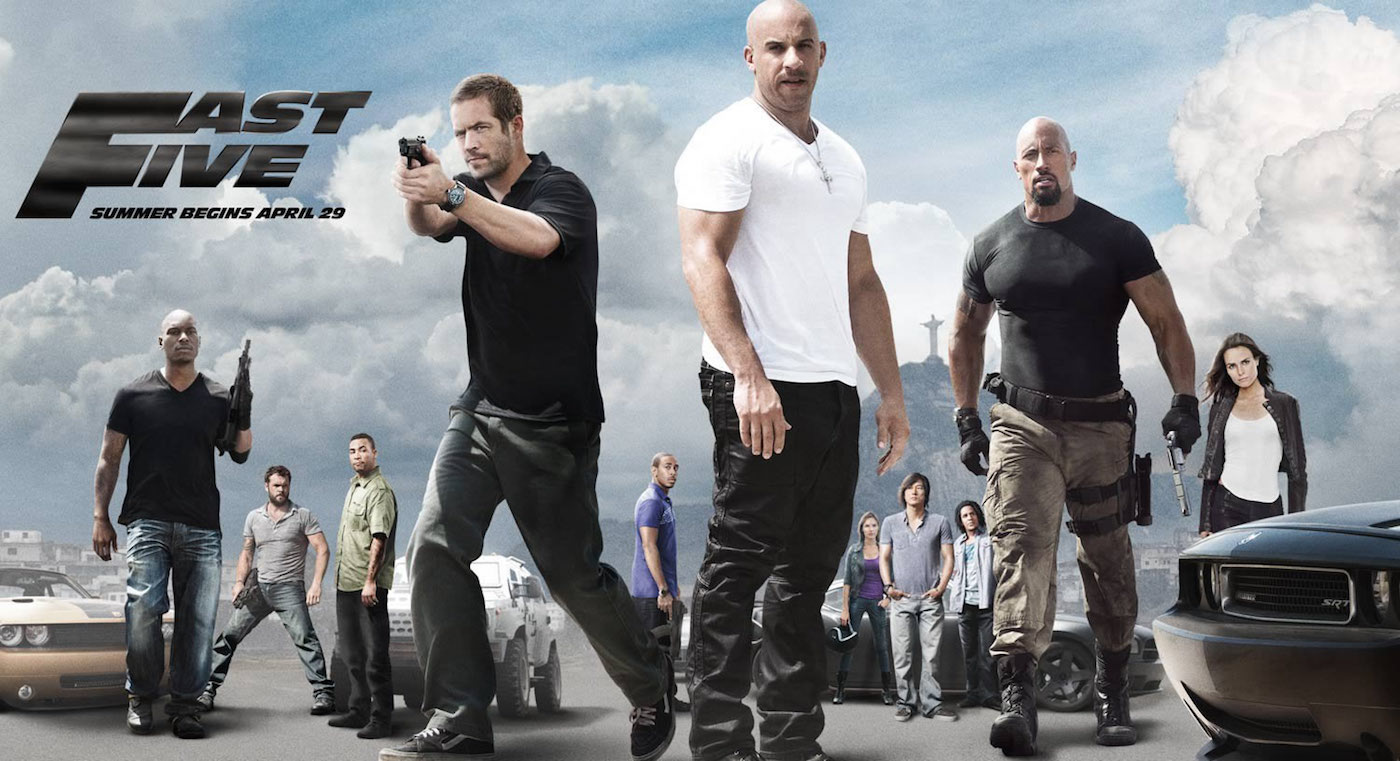 I’ve been excited to talk about Fast Five since roughly the very minute the credits rolled in 2011. This is a film that is fundamentally engineered to make you pump your fist in glorious celebration of doofy brilliance. Fast Five flatly declares that if you are holding fast to narrative concepts like setups and payoffs of even basic information, you are doing it wrong, and you are probably a boring jerk who is not invited to the barbeque. Every interaction, every single plot point, every last glistening, sweaty frame is in service of creating and delivering the moments you actually want. Whether you know it or not. If you are on Fast Five’s wavelength, you’re welcome to a beer in the fridge, as long as it’s Corona. You’re part of the fambly, now. And that fambly is what elevates Fast Five out of the realm of 4th sequel to a mediocre Point Break ripoff, and earns it the status of a lunkhead modern classic.

Picking up immediately after the events of Fast & Furious, this film overlays TV news reports of a daring prison bus escape, with the very event the reporters are covering. Brian and Mia (now firmly and joyously embracing their criminal status, and each other) orchestrate this dizzyingly stupid rescue plan whereby they will flip Dom’s prison transport multiple times in order to free him from it. This establishes the most important piece of information you will need for the rest of the film: Characters have read the script, and bank on the invulnerability of other characters. They are aware of their own nature as protagonists, and it is beautiful. I would absolutely accept it without question if you told me they were seeing the TV news reports and clanking beer bottles at somehow the exact moment they are rescuing Vin Diesel’s Dom from a prison bus which must now resemble a can of tomato paste on the inside. Speaking of those news reports, why are they glitching and artifacting while narrating the action for us? Shut up, nerd. That’s why. Fambly reunited, the crew uses the one superpower that is the most defined over the course of this series, and leave for Rio de Janeiro with seemingly no interference from any sort of law enforcement body. Finally, one cop gets fed up with their mysterious ability to avoid capture, and makes the fambly his personal crusade.

Once in Rio, a job gone wrong puts the team on the bad side of the big time crook who hired them to snatch some cars from the DEA. This dummy has apparently left all of the secret info about his drug operation on a chip in one of the cars. Reyes’ men end up killing the DEA agents in the ensuing carnage, landing Dom’s crew squarely in the sights of Dwayne Johnson’s magnificently badass Luke Hobbs. The crew realizes that if they are ever to be free of both Reyes and Hobbs, they need to take literally all of Reyes’ money and move to a country without extradition. The stakes raised and the foundation set, the heavens open to provide us with a heist mechanic excuse to reunite Dom, Mia, and Brian with series fan favorites Han (Sung Kang), Roman (Tyrese), Tej (Ludacris), and Gisele (Gal Gadot). Also, Vince is there, along with newcomers Leo and Santos. Learning the best lessons of Bond, the newly introduced globetrotting aspect of the series means we get to wallow in exotic locations with our best buddies for no other reason than because it’s what we want. The photography is so good you can smell the body spray.

This is where Fast Five begins to shed the robes of an almost-anthology series about street-racer thieves and the police who love them, and begins to take its place as the modern, dudebro inheritor of both the James Bond and superhero genetic soup. One year before The Avengers is released, the culmination of years of interrelated films sharing the same universe and colliding in a huge cultural event, The Fast & The Furious series will eat Marvel’s lunch. The fifth installment in a low rent action-crime series suddenly develops perfect self-awareness, plucking the choicest aspects from their respective entries, and creates a meathead melange so alluring, fun, and blissfully irreverent that it will ably stand toe-to-toe almost yearly with the biggest blockbuster franchise entries Hollywood can throw at audiences.

The stroke of genius that cements the recipe is the addition of Dwayne Johnson as Hobbs. Hobbs seethes and sweats. He threatens and squashes. His indestructible G.I. Joe jeep flattens all in his path. He is Ben Stiller’s Starsky presented as a god of perfect force and muscle-y retribution. His UnderArmour logo a badge of manly authority. The only desire in his heart stronger than serving justice to the team? The glimmer of the smallest chance imaginable that he might join with them. In his darkest recesses he hides the perfect yearning to fall into the macho embrace of the fambly at the slightest provocation. The formula is perfectly mixed, the nitrous is primed, and a series of escalating confrontations builds to a crescendo of such stupefying heights of physics-denial that the most ardent flat-earther could not match its vituperative dismissal of the laws of science. But there is such joy in the execution of these dimwitted exploits that the coldest hearts can’t help but be melted. The most stalwart adherents to traditional storytelling are made to shut their boring mouths and become one with with the speed force of the fambly.

If it sounds like you’re being told to turn your brain off, you’ve taken a wrong alley in the Rio of your mind, fam. This is a film that knows exactly what it is doing at all times. So many story or character decisions in this film are made impulsively or in diametric opposition to established facts from mere minutes before, because the movie and the characters know that this will result in a more thrilling chase, a more badass exchange, a more rewarding turn. These dummies are collected for skills that they never employ. Gal Gadot’s Gisele is brought in as a weapons expert and I can’t recall even a passing attempt at justification. They somehow purchase a 10 ton safe for a heist meant to raise them up from destitution, and overnight it to Rio. Tej has gone from being a bookie who can’t drive to the resident team tech expert and hacker extraordinaire. Because Tej can do whatever the hell the series needs at whatever moment it needs it if it means we get more Ludacris and Tyrese banter. Oh, and Tej’s stated purpose, which is to somehow blind the police cameras to the team’s approach, is utterly abandoned so that the team can just steal police cars. Hobbs chasing, joining with, and chasing the fambly again is of a perfect peace with the soul of this series as now established. Y’all, this is all pure bananas, and it’s exactly as it’s meant to be. We don’t watch these films for the plot or construction outside of the dynamite action, fight, and chase scenes. We watch these films for the joy of these characters’ camaraderie, and their genuine and earnest affection for each other. Seeing them love each other makes you love them more. Witnessing the sheer joy of their joining allows us to take part. It makes us all fambly.

So grab a Corona. Dom and the crew have the grill hot and the engines primed and the 10 ton safe hooked up to drag us kicking and screaming into a good time. And the promise made in the post-credits scene tells us it’s okay to say goodbye for a little while, because fambly is forever, and like the resurrected Letty, it’ll never be gone for too long.

THE FAST AND THE FURIOUS: The SUICIDE SQUAD of the Early... Previous
Review: THE FATE OF THE FURIOUS Next