Films of Christmas Past: BETTER OFF DEAD

A satisfyingly bizarre way to spend the holiday season. 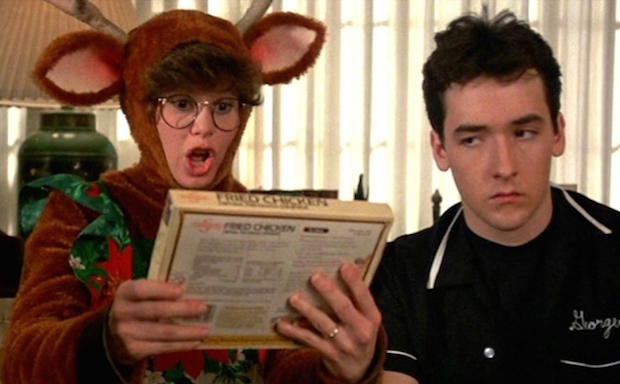 Growing up, I didn’t have your typical holiday tradition of watching It’s a Wonderful Life or A Christmas Story.  I didn’t spend my Christmas Eve watching Charlie Brown or Rudolph.  No, in the Kuhlman household, there were a select few films that qualified for the coveted title of essential holiday viewing.  Some were classics, such as Monty Python and the Holy Grail.  Others, however, are more acquired tastes.  All of which is to say that my favorite film for the Christmas/New Year’s/Holiday season is the 1985 John Cusack film Better Off Dead, a film that is absolutely bananas.

Following the exploits of freshly single Lane Meyer, whose girlfriend dumped him for the ski team captain a mere weeks before Christmas, Better Off Dead introduces us to the fictional world of Greendale, California.  Lane’s ensuing depression from the breakup leads us through a series of botched suicide attempts, skiing failures, and educational and workplace mishaps.  Seemingly at his lowest, Lane begins to befriend a French foreign exchange student named Monique who helps teach him how to ski the monstrous K-12 mountain in a desperate attempt to win back his now ex-girlfriend.

I could sit here and tell you how great the writing and the acting is, or wax poetic about the directorial choices involved, but I’m not going to bore you with technical details.  Instead, I’m going just try to briefly describe some of the utter insanity that this film contains.  Do you want a film with a Claymation dancing cheeseburger that plays guitar and sings along to “Everybody Wants Some!!” by Van Halen? You’re in the right place.  Love Booger from Revenge of the Nerds, but wish he spent more time trying to huff Jell-O or snow in a desperate search for a high? You’re in luck.  Care for multiple car chases featuring a pair of brothers who only learned English from watching Howard Cosell? Boy, do I have the movie for you.

That isn’t to say the film is just some avant-garde, surrealist exploration of the lives of sentient cheeseburgers; the film surrounding these events is a solid teen romantic comedy.  Even without the bonkers events on the periphery of the film, Better Off Dead would easily fit in the John Hughes set of high school oriented films that dominated the 80s.  What is key to the whole film working is that none of the bizarre events I described above (which are a mere tip of the iceberg) are treated as out of the ordinary, and Cusack’s performance as Lane is integral in keeping the whole picture grounded.  Cusack is in his wheelhouse here, and his sardonic and wry demeanor is a incredibly effective contrast to the offbeat characters of Greendale.

All of this, and so, so much more, is what Better Off Dead brings to the table.  It isn’t going to knock your socks off with luscious cinematography, nor is it going to wow you with elaborately fleshed out characters.  What the film does, however, is never stop trying to be as weird as it possibly can be all while never failing to service the story’s solid dramatic foundation.  It’s a satisfyingly bizarre way to spend the holiday season.

The Star Wars on Film: ROGUE ONE And Sci-Fi Warfare Previous
AUTOPSY OF JANE DOE: Tanner Says See It Next

"It's time for the Jedi to end"