Celebrate the holiday with the Griswolds 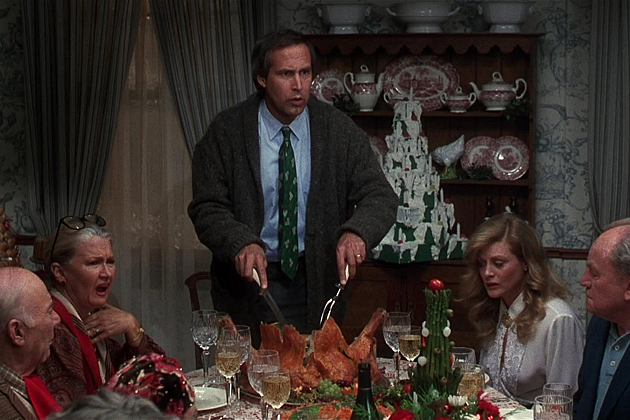 If you’re anything like me, you have Christmas traditions. Whether it’s a special dish for a family meal, a particularly hideous sweater you enjoy wearing, a trip you take every year, or the games you play at family parties, everyone has something they do every year to celebrate the holiday. One of my big ones, at least for the last few years, has been to make sure that sometime during the week before Christmas, I take the time to sit down and enjoy that greatest of all Christmas movies, National Lampoon’s Christmas Vacation. I’ve reached the point where it feels like I’m not properly celebrating if I don’t spend that hour and thirty-seven minutes with Clark Griswold and his certifiably insane extended family.  Christmas Vacation is a special case in that, considering their more recent filmography, you wouldn’t expect a truly enduring holiday classic from the likes of National Lampoon. It speaks to the universality of the story, about a put-upon family man just trying to survive the holidays with his extended family, that the film has endured and stuck in the public consciousness for the last 27 years.

I’d wager that most of us have a little Clark Griswold in us, some more than others. Who hasn’t gone into a holiday or a party with wild and unreachable expectations, only for reality to provide a sudden course correction? Clark, however, takes this to a level that may not be humanly possible to achieve. Whether he’s picking out a tree, decorating his house, tobogganing, or deciding to make a down payment on a swimming pool before being certain that he has the money to pay for it, Clark is not a man who believes in half measures. No; his tree will be magnificent, his house will be the most spectacularly lit in the neighborhood, his toboggan will slide across the ice as fast as is humanly possible, and gosh darn it he isn’t going to wait for his stinking Christmas bonus to start paying for that pool. Each step of the way, Clark chooses to go big, and each step of the way it finds a way to come back and bite him to hilarious effect. But he doesn’t give up, no, he keeps trying to find a way to make it work. Clark’s holiday spirit is indomitable and he’s going to have his perfect Christmas if it kills him.

It’s not just Clark’s continuously backfiring plans that he has to contend with, though. He also has to deal with visiting family who are eccentric at best and downright insane at their worst. Whether it’s his disapproving in-laws; his wife’s geriatric aunt and uncle causing disaster after disaster with their complete lack of situational awareness; or the bane of Clark’s existence, Cousin Eddie, kidnapping his boss, blowing up the sewer system, and setting an out of control dog loose in his house, Clark clearly has a family problem. And while we may have never experienced it to the extent that Clark does, I think we all can relate to the fact that sometimes, especially during the holidays, dealing with family can be its own kind of adventure. Someone may offend someone else, show up late or unexpected, or kick off the insane antics that sometimes come with large family gatherings. Holidays with the family can be a minefield, and Clark manages to set off every last mine.

If I had to guess why Christmas Vacation has resonated with so many for so long, I’d say that it’s probably because we can relate. We may not have a cousin blowing up the sewer line, or Christmas decorations that black out the neighborhood, but we can all sympathize with a family that is groaning under the strain of the holiday season. The movie also allows us to gain a small bit of perspective. Because as wild and crazy as life can get, most of us don’t have a Cousin Eddie to deal with. We can sit down and share a laugh at a cinematic family that is handling things a little bit worse than we are, and be together and enjoy the time spent with those we love and on the traditions we hold dear. So grab your winter beverage of choice, a warm blanket, and snuggle up to watch a true Christmas classic.

AUTOPSY OF JANE DOE: Tanner Says See It Previous
Films of Christmas Past: A CHRISTMAS STORY Next

Celebrate the holiday with the Griswolds