Fleet Week: MASTER AND COMMANDER: THE FAR SIDE OF THE WORLD 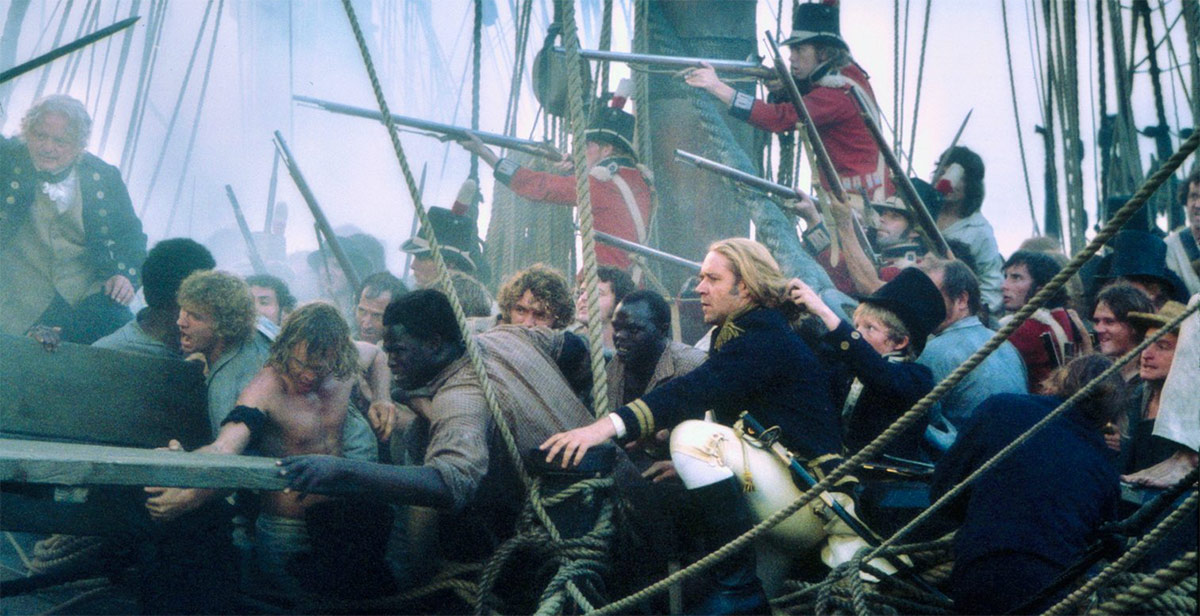 Master and Commander: The Far Side of The World was released in 2003 to critical acclaim, going so far as to earn 10 Academy Award nominations. It suffered the unfortunate fate of competing with the blockbuster/legacy adaptation juggernaut Lord Of the Rings: The Return of the King, which ended up sweeping that year’s Oscar race with a 11 wins, to include Best Picture. Master and Commander seems to have found its niche as a cult favorite, with those aware of its greatness on an ongoing quest to convert those who haven’t yet seen it. I count myself among those missionaries, but my love for it goes a bit deeper than simple fan adoration. One of my goals in my study of film is to become a connoisseur of war films, if not an outright historian somewhere down the line. My end is not to achieve some sort of intellectual superiority, however. Instead, my journey through film is my therapy, my catharsis, my way to digest and contextualize the experiences throughout my decade of military service. In that regard, I feel confident in declaring Master and Commander as one of the greatest war films ever made, as well as being a film that deserves its proper and rightful recognition as an all-timer to be remembered through the ages.

Master and Commander is itself an adaptation of a famous novel series by British author Patrick O’Brian. The collection of works, known as the Aubrey/Maturin series, spans 20+ books recounting the adventures of British Naval officer Jack Aubrey and his close friend Dr. Stephen Maturin during the Napoleonic wars. Russel Crowe leads the cast as Captain Aubrey, with the incomparable Paul Bettany in the role of the good doctor. The film plucks story elements from multiple novels, though its primary plot is derived the tenth entry “The Far Side Of The World”, in which Captain Aubrey and his crew aboard the HMS Surprise set sail towards the Pacific ocean to defend British whaling ships from a powerful enemy vessel. Whereas the original story involved the hunt for an American war ship, the movie alters the identity of the antagonist to that of the French privateer ship the Acheron, a state-of-the-art frigate that boasts nearly double the capacity of the HMS Surprise in size, speed, crew, and firepower.

When it comes to realism in war movies, suspension of disbelief is usually the price to pay for dramatic license. That said, I find that any film which establishes a base level of real world military accuracy in its proceedings makes the narrative that much more enthralling and effective, as the stakes and tension resonate on a deeper gut emotional level. O’Brian’s original novels were renowned for their attention to detail in the mechanics of seafaring, and along with a bevy of historians and military advisers, Master and Commander presents one of the most accurate and gripping portrayals of naval warfare during the Age of Sail ever committed to screen.

From the very beginning of the film, you are hit with a wave of nautical terminology and military jargon as the Surprise has its first deadly encounter with the Acheron, “Lucky” Jack and his crew barely escaping a sneak attack by the skin of their teeth. Master and Commander does a fantastic job of establishing the context for all the calculated chaos through concise geography and coherent action. You don’t need to know what “beat to quarters” or “come up the larboard topsail sheets” means in order to comprehend when the thereat of battle is near or to understand that the seas have become particularly perilous for sailing.

The battles are a deafening flurry of blade, bludgeon and black powder. The sailors work in concert under their fearless captain’s command like an orchestra under the wand of a master conductor performing a gloriously barbaric symphony of violence. Each person is an integral cog in the well oiled machine, every hand on deck vital to ensuring the day is won. But more than the tactics and brutality on display, the true essence of naval warfare shines in the strategic deception and cunning maneuver displayed by both captains and their crews. One particularly clever gambit involves a small mock up boat with torch lights affixed, constructed under the dead of night. When the small boat diverts from the main ship’s course, the encroaching Acheron gives chase and is lead astray by the decoy, leaving time for the crew to regroup and reengage. The two vessels play a deadly game of cat and mouse throughout the entire film, with both parties employing all manner of trickery up to the very end.

Along with the technical accuracies of battle, great attention is paid to the rank structure itself and the significance of each character’s duty position. Once again, the audience need not know what a coxswain or loblolly boy is in order to recognize the chain of command and each crew member’s area of expertise, as well as what it means for the success of the mission when one is injured or lost. The end credits even go so far as to delineate the cast members by their positions on the ship, with officers, midshipmen, and crew listed in order of rank. The particulars of the importance of the chain of command at sea is also emphasized, as the any break in discipline on such a long and dangerous journey could spell disaster.

In a typical war movie, one or more of the characters might succumb to the stress of battle and become mentally unstable, manifesting symptoms of “shell-shock”/battle fatigue/PTSD (the name varying depending on what era of warfare the film takes place in). Master and Commander shows us the particular stress associated with seafaring and naval combat. The crew are in a constant state of peril from either enemy pursuit or the unforgiving sea conditions and storms that could sink them just as well as any cannon barrage. The confines of the ship itself, squalid and cramped, tax the nerves. Even the instances of calm and quiet become an enemy, as idle hands and boredom quickly give way to misconduct and paranoia, the precursors to the uniquely terrifying prospect that is mutiny.

Master and Commander has the sensibilities of traditional war movie in that there is a clear distinction between heroes and villains, but it also takes moments to ponder the moral ambiguity of war. Captain Aubrey is steadfast and loyal to his men and His Majesty, though even he shows pangs of doubt and regret at times throughout his journey. After a battle where one of the young teenage midshipmen is seriously wounded, there is a look of sorrow on Aubrey’s face that seems to indicate the displeasure in having to throw young men into the meat grinder. During a stop for provisions in South America, a young native sex worker catches his eye. They trade smiles from afar, but his expression fades into a grimace, as if he is ashamed or slightly disgusted by this market industry that colonialism has wrought. He engages in several heated conversations with his trusted confidant Dr. Maturin about the necessary evils of enforcing discipline and completing the mission at all costs. The Captain is unwavering in his commitment to duty, at times expressing jubilation in his dedication to service. On the other hand, you also see the mental and spiritual toll put upon him by having to navigate the grave moral quandaries of warfare.

There have been a number of war films in the modern age that military personnel have taken to for both instructional and morale purposes. I remember being shown clips of Saving Private Ryan and Black Hawk Down during quarterly training events as examples of heroism and bravery under fire. Soldiers and Marines take to movies like 300, emulating the Spartan iconography and incorporating quotable bits of dialogue into their daily lexicon. Master and Commander deserves to be continued among these popular war movie favorites and should be a staple of any service member’s viewing list in an academic or entertainment setting, especially since it surpasses those aforementioned in several regards. It is a rousing bit of militaristic fanfare that stops short of being hawkish propaganda, while also serving as a thoughtful case study on the nature of leadership. Time will tell what’s to become of Master and Commander‘s lasting legacy, but I can say most assuredly that it has already earned its place among the pantheon of classic war films and indeed the greatest films of all time.

Welcome To FLEET WEEK! Previous
The New VALERIAN Trailer is Gloriously Bonkers Next