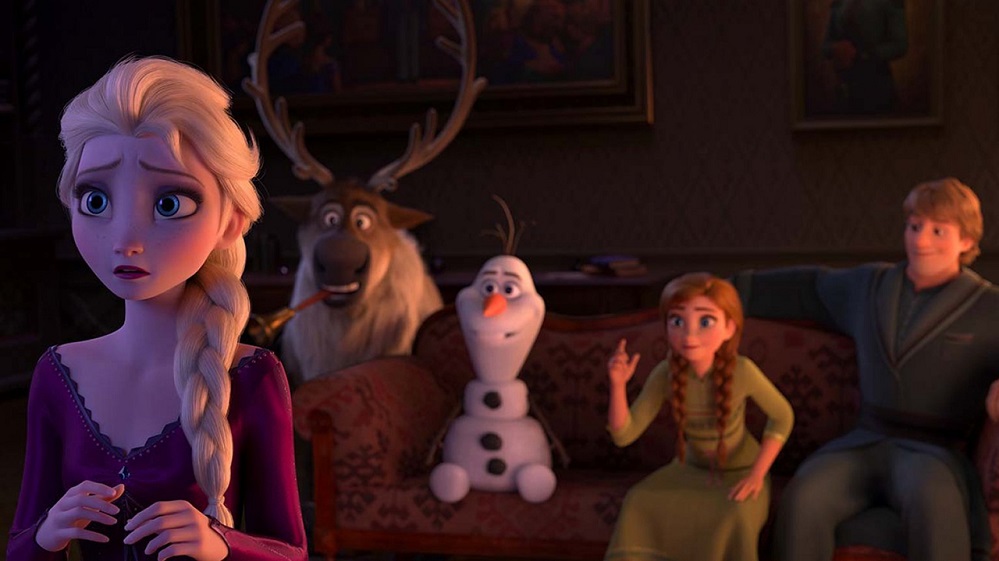 Gun to my head, 2013’s Frozen is my pick for the best blockbuster of the decade. It’s a perfect film, effortlessly subverting the Disney Princess genre while simultaneously working as a flawless example of it. Every box a mainstream, mass-audience musical film should tick, Frozen does: it’s a treat to watch, the songs are incredible and instantly iconic from start to finish, and there’s a simplicity to the narrative and a precision to its every intent, allowing the artist’s imagination to fill in the margins. Even the corporate-approved “girl power” thematic material feels genuine, and it’s weaved into every facet of the film, as opposed to the lip-service Disney’s films have paid to being feminist the past few years. It’s a once in a generation film that has earned its place among the all-time great children’s films.

Frozen II eschews the straightforward plotting and amplifies the magical qualities of the first film, replacing the Disney Princess deconstruction with a pure high-fantasy film. Elsa (Idina Menzel) and Anna (Kristen Bell) continue to rule the kingdom of Arendelle, but the former keeps hearing a voice in the night that keeps her up. She finally responds to the voice, which turns out to be the spirit of an enchanted forest that is covered in a bubble of fog that no one has ever entered or returned from. When the spirit threatens Arendelle, Elsa and Anna (along with Kristoff, Sven, and Olaf) venture into the forest to find out how to fix the present and discover things about their family’s past.

The first comparison point that comes to mind is, oddly enough, Alex Garland’s Annihilation. The “enchanted forest” is basically “The Shimmer, For Kids,” containing mystical creatures and forcing the characters to face their biggest fears and stare down the truth of their pasts. Similarly to how Frozen was a direct response to the past century of Disney films for little girls, Frozen II feels like an attempt to correct the mistakes of the past, particularly the more problematic aspects of Pocahontas. Frozen II also expands on the previous film’s themes of sisterhood, and the queer subtext is even more pronounced this time around. It’s an ambitious film, using the goodwill the first film earned with audiences to tell a more elaborate, potentially alienating film.

The music, from the husband/wife team of Double EGOT Robert Lopez and Kristen Anderson-Lopez, is once again the driving force of the film. The pair continues to be the strongest songwriting duos in the industry, seamlessly blending pop sensibilities with broadway bombast, creating music that worms its way into your brain and never leaves. “Into the Unknown” and “Lost in the Woods”1 are the biggest standouts, and Idina Menzel and Jonathan Groff deliver performances that remind you why Disney used to bring in Broadway performers for their voice roles in the animated musicals as opposed to famous musicians and A-list celebrities.2 If there’s a flaw in the music, it’s merely that it has to live up to the first film’s all-timer of a soundtrack, which had absurdly extraordinary songs from start to finish.

The standout scene in Frozen was the “Let it Go” sequence, combining what has become one of modern cinema’s defining musical numbers with the marvelous animation displaying Elsa’s developing powers and the construction of her ice castle. Frozen II is constantly trying to up the ante on the first film visually, particularly when the film gets into the enchanted forest. Spirit animals, rock giants, and a literal ocean of wonders are introduced this time around, utilizing the animation format to be as inventive as possible. It’s a beautiful film to look at, and directors Chris Buck and Jennifer Lee throw something new and extravagant at the screen all the time.

Is Frozen II as good or better than the first film? Is that even a reasonable expectation to ask? Frankly, the fact that Frozen II comes as close as it does to the first film’s quality is an impressive accomplishment. What it lacks in the first film’s directness it makes up for in pure spectacle and it’s shoot-the-moon energy. Walking out, it maybe doesn’t have the same showstopping, immediate impact of the first film, but it’s aiming for something totally different and was never going to achieve that level of crowd-pleasing. Frozen II is a good film that lives up to its predecessor, even if it doesn’t achieve that film’s level of greatness.