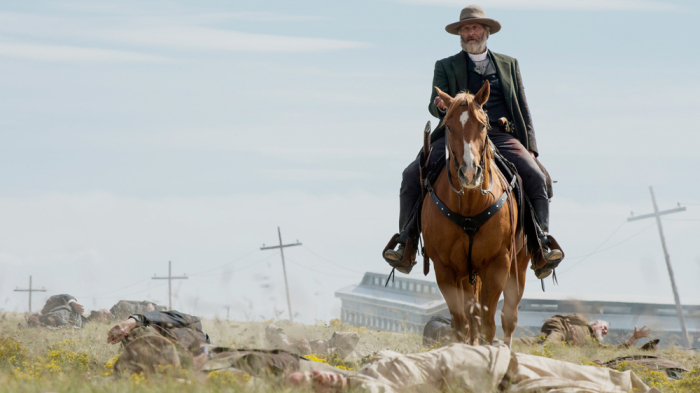 Think female-led Western, and a few different films will come to mind. Maybe it’s colorful, musically-narrated Cat Ballou, or pulpy Kill Bill-prototype, Hannie Caulder. Or maybe it’s more modern films like Bad Girls and Bandidas, tongue-in-cheek action romps more in common with Bad Boys than the Old West. Godless, the new Netflix limited series written and directed by Scott Frank, is none of the above, being not colorful, musical, or a romp. And unlike the advertising, which seems designed to latch onto the #MeToo movement, Godless isn’t even about the women.

Godless is a show about two men coming to blows in the wicked, wild West: the villainous Frank Griffin (Jeff Daniels) hunting down a bandit-with-a-heart-of-gold aptly named Roy Goode (Jack O’Connell). Acting as a background is the town of La Belle where the men have all died in a tragic mining accident.

This makes Godless sound like a single show, rather than the two or three shows it really is. One is the Frank Griffin show, the man marauding his way across the West accompanied by a gang some thirty-odd strong. He’s ostensibly in pursuit of Roy Goode, partly over some stolen money and partly over a betrayal of feeling, but does so with an unclear path to follow and several detours along the way. The second show is the Roy Goode show, about Roy coming to a ranch on the far outskirts of La Belle owned by Alice Fletcher (Michelle Dockery) and how they come to an uneasy understanding and bond over their respective outsider statuses. Goode even becomes a surrogate father of sorts to her half-Native son, Truckee (Samuel Marty). The third show, based on how little connection is present between the Fletcher ranch and the town itself, is the La Belle show, except even here the town of La Belle is backgrounded. Mary Agnes (Merritt Wever), sister to the town’s sheriff, Bill McNue (Scoot McNairy), goes around trying her best to keep La Belle out of the iron grip of greedy mining barons and keep up the spirits of the increasingly dispirited women who still miss their husbands and crave some order in their lives.

The series opens with the aftermath of the massacre of the town of Creede (get it?), the first of many violent and over the top scenes that demonstrate how bloody the creators seem to feel a prestige show will allow them to be. The destruction is the work of Frank Griffin and his gang, and its horror is punctuated by Marshal John Cook (Sam Waterston) coming across a woman crying while singing a hymn and the hanging body of a child. Roll credits. This sets off a series of events that leads an injured Roy Goode to the Fletcher ranch in the middle of a stormy night and sets Griffin after Goode.

The godlessness of the title could perhaps refer to the brutal land in which these events take place, though the show is not a big one for big sky shooting nor for showing the West as particularly unforgiving. There are some open vistas, certainly, but Godless doesn’t celebrate the vastness or rawness of the space. Slow moments are often intimate moments between characters in cramped rooms, not grandiose shots in which the world desperately looms over struggling pockets of civilization.

More likely the title refers to the capricious speechifying of Frank Griffin who has certain feelings about religion and belief, but these are never made clear to the audience. Griffin shoots a man for blasphemy one minute, and the next minute rides his horse into a chapel to lecture churchgoers about the dangers of Roy Goode. One night he tells a group of soon-to-be-victims about his childhood as a survivor of the Mountain Meadows massacre, however because this story is told without the show’s usual stylistic shorthand for memories (not quite black-and-white, not quite sepia-tinted, a choice that looks like an After Effects version of a Sin City filter), it’s hard to tell if we’re meant to take the story seriously. The very next morning he tells the same victims there is no God—or at least not one worth following if He made both Frank Griffin and the rattlesnake. Then there’s the time Griffin wanders off in the middle of his pursuit of Roy Goode to spend an entire episode alternately ministering to, killing, and burying the victims of a smallpox epidemic.

The series meanders, repeating itself along the way. Halfway through, Marshal Cook is killed in an ambush by Griffin and his men, all thirty somehow hiding silently in an unlit bar simply to goose the audience about Griffin’s ongoing malevolence, only for the trail to be picked up again by Sheriff McNue who was already pursuing the marshal in his pursuit of Griffin. McNue, suffering from what the townsfolk are calling cowardice but that is really failing eyesight (or could also be the loss of his shadow, as multiple shamans tell him), goes on a fruitless chase until he’s caught up to by Roy Goode to bring him back to La Belle. Along the way he discovers that a mysterious Indian who has been shadowing him may or may not be a ghost in a hint of Weird West that’s dismissed as quickly as it’s introduced.

Racially, the show is a mess. Aside from the presence of First Nations actors who only exist to be stoic, mystical, or both at once, there is a black village on the outskirts of La Belle. Made up of former Buffalo Soldiers from the Indian Wars and their families, whom the audience is told are ruthless and strong fighters now simply trying to make peace with themselves in a world that still resents the end of the Civil War, the group, led by spokesman Elias Hobbs (Erick LaRay Harvey) exists seemingly at the behest of the white characters. Whether or not it’s Elias facing off with Deputy Whitey Winn (Thomas Brodie-Sangster) over courting his daughter, or the villagers being threatened to keep to themselves by the hired guns of the mining consortium trying to take over La Belle, they’re solely at the whims of what is going on externally. The worst aspect, however, might be their slaughter at the end of the series to make La Belle’s situation that much more desperate. Having served no plot purpose, they act as a final, unnecessary reminder of Griffin’s evil; they are slaughtered almost to a man (and woman, and child, all stacked like firewood) and with nearly no casualties on the other side to show for it. It’s as pointless and ugly as Scatman Crothers traveling all the way from Florida to the Overlook only to immediately get an axe to the chest. Except that there are many, many more victims. In today’s day and age, watching black people slaughtered all at once by violent white people to no other purpose but to serve as a threat to other white people, well, it’s hard to see how such a thing left the Netflix offices untouched or remarked upon.

The show looks like Deadwood, and smells like Deadwood, with all the appropriate grit and filth layered over the proceedings, but it doesn’t sound like Deadwood. It never approaches that show’s lofty Shakespearean heights or True Grit’s wryly Mark Twainish mannerisms. It wears its influences on its sleeves. Deputy Winn is introduced with the swagger, style, and look of Leonardo DiCaprio in the Quick and the Dead (coincidentally another female-led Western), and the same youthful, cocksure gunfighter makes up the spine of both characters. Mary Agnes, who goes about in men’s clothes, gets a lesbian subplot with the town’s former prostitute that’s straight out of the Calamity Jane and Joanie Stubbs playbook in the previously mentioned HBO series. It’s not that there’s a problem with art that transmutes the familiar into something new—art is built upon doing that. It’s that in a series that never comes together in a satisfying way, the wholesale lifting of concepts only serves as elbow jabs to the ribs reminding the audience of better work.

When the show reaches its conclusion, it does so with all the grace of a shrug. The ending comes not because the story has organically reached that point, but because there are no more episodes to fill. Frank Griffin comes to town because a minor character who was introduced a few episodes in to the series tells him to. Alice Fletcher, frantically riding around searching for her missing son Truckee, gets stopped by Mary Agnes on her way through town and suddenly agrees to postpone her hunt for her only child to shoot some men from the hotel roof. The final fight itself, between Griffin’s gang and the women of La Belle, boils down to a generic Alamo-style siege between two opposing sides. It’s made slightly familiar only because the same limited pool of extras has been maintained, but not because we actually get to know “bearded guy #2” or “lady who dresses fancier” before they’re cut down. Tons of gunshots, fire effects, and dangerous stunts later (admittedly, a horse and rider wreaking havoc inside a hotel is neat), the battle ends, and Griffin rides out of town only to be confronted by Roy for reasons the show has never made explicit except that it’s supposed to happen. The town is left to pick up the aftermath.

Perhaps the worst aspect of the show is that it’s not completely awful. It can’t just be dismissed out of hand. The actors, with what they have to work with, are fantastic from end to end, the women outshining the men, and the men not slacking. Wever and Daniels deserve extra special mention, though it’s hard to pick any one out of the crowd. And the show looks beautiful. The texture is earthy and real, the violence violent, the guns blazing. It’s clear the costumers and crew came together to create a vision even if it was in service to something not fully realized. Where the show falters is in the writing. A few more passes might have centered the show on the town, on the women of La Belle, made their deal with the mining consortium the focus. But that’s all speculation. It’s only for me to comment on what we’re given, not to rewrite what’s there. Perhaps it was the length that did Godless in. Maybe all of it shortened to a two-hour epic would have patched over the holes and meandering nature that seven hours exacerbated. Either way, it’s not a unified story and the sore spots are made the sorer for it. If the show had taken the time to look at itself, to tighten up and come together better, Godless might not feel so in need of some divine intervention.

The Star Wars on Film: ROGUE ONE And Sci-Fi Warfare Previous
STAR WARS at 40: The Power of Myth Next

Y2K angst, brutal violence and a kid sidekick, oh my!