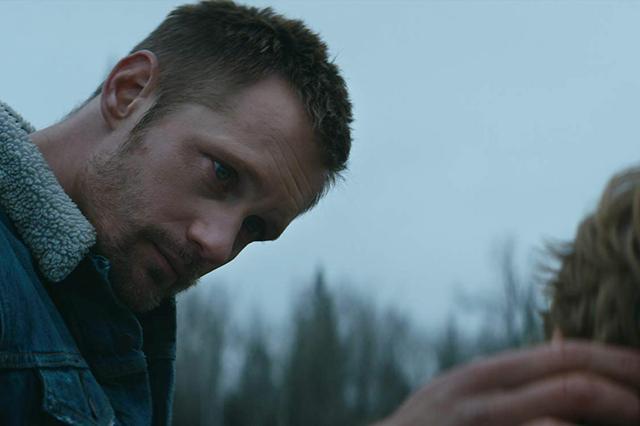 Between Blue Ruin and Green Room, Jeremy Saulnier has definitely established a name for himself. Tight, sparse aesthetics, brutal violence, quiet menace and unbearable tension have been the name of the game for him in the past few years, after his more offbeat and silly ultra low-fi horror comedy debut Murder Party. Blue Ruin and Green Room are both terrific movies, but they definitely very much feel of a piece with each other, and now with Hold the Dark, the time has come for Saulnier to try to spread his wings a little.

Hold the Dark (adapted by Saulnier’s regular collaborator Macon Blair fairly faithfully from a novel by William Giraldi) has been garnering polarizing reactions since it premiered a few weeks ago, and once you’ve seen the film it’s not exactly hard to see why. Go into Hold the Dark expecting a continuation of Blue Ruin and Green Room from Saulnier and you’re likely to be rather disappointed. Hold the Dark is thirty minutes longer than Blue Ruin or Green Room, is only fleetingly tense in a few select sequences, and right from the outset it adopts a rather languid pace, taking its time as it slowly and methodically unspools its story of human brutality and savagery. However, it adopts this pace with purpose, staging itself as a meditative mood piece in an otherworldly snowy landscape, where the bursts of violence aren’t a tightening of screws, but a release, a brief explosion puncturing the quiet before resuming its slow trek into the heart of darkness. The cinematography hammers the otherworldliness of the film home, feeling like the next logical step for Saulnier after the sparseness of his previous two films.

I won’t say much about the plot, as knowing as little as possible going in will most likely enhance the experience, but the movie follows what happens after a wolf expert named Russell Core (played to the hilt by a perfectly cast Jeffrey Wright) is called to a small village in the remote Alaskan wilderness by Medora Sloane (played with alien detachment by Riley Keough) to hunt down wolves said to have killed a few local children, including Medora’s son. What Russell finds after his arrival eventually triggers a bloody swath of vengeance by Medora’s husband Vernon (Alexander Skarsgard) upon his return home from the post-9/11 Iraq War. Core and local police chief Donald Marium (James Badge Dale) set out to find him before he can finish his violent quest. The rest is best left unspoiled until seeing the film.

The plot is pretty much a straight line overall, but it’s told in such a way that almost crosses into surrealism a few times, with plenty of thematic imagery to chew on. Saulnier trades the tight intensity of his previous films for a chance to try something headier and more opaque. The movie zeroes in on the Sloane family and the people in the village of Keelut, a town in a world far, far from one what might deem “typical human civilization,” and it becomes clear what living in such a harsh, unforgiving wilderness will do to a person. Early in the film, Medora scoffs at Core’s mention of Anchorage, stating “that’s not Alaska.” The people of Keelut, particularly Vernon and his best friend Cheeon (Julian Black Antelope), resent the local law enforcement as well as outsiders in general. The movie draws strong parallels between Vernon’s savagery and that of a wolf (going as far as having him wear a wolf mask for a huge bulk of the film), which Skarsgard sells the hell out of by playing him with a dead-eyed, animalistic intensity, one where you never quite know how he’ll react in any given scene. Vernon is introduced in Iraq, an environment as far removed from the Alaskan wilderness as possible though no less harsh, and his experiences in that horrific warzone coupled with his upbringing ultimately create a dark, coherent character, even when he’s wearing a mask that sort of makes him feel like a backcountry Michael Myers. Will he give you a handshake or will he shoot you in the head… or could he change his mind between one or the other over the course of a scene? Skarsgard absolutely nails it, easily the best performance I’ve seen from him.

However, even acknowledging that Hold the Dark is a very, very different film from Saulnier’s previous work, I still think it has some flaws that hold it back from being all it could be. For one, the movie sort of loses the character of Core in translation to screen. In the novel, Core was a retired naturalist, distant from his wife and estranged from his daughter, harboring the guilt of the life of the wolf he snuffed out years earlier. He seemingly came to Alaska because he needed to find some semblance of closure, and maybe even because of a latent death wish. None of this really comes across in the film, as Core’s internal monologue has been dropped entirely, with no attempts to really translate it to the cinematic text beyond some lip service about his daughter. Also, the movie sort of whiffs the ending of the novel, excising the last chapter entirely and consequently making the wrap-up of the story infinitely more vague, maybe so vague that the audiences who haven’t read the novel might not actually get it from watching the film. Additionally, the film also kinda-sorta accidentally slides into stereotyping Native Americans (albeit briefly), as they begin proclaiming that Medora has become possessed by a wolf-demon, and almost treating one elderly villager like a mythological witch. Maybe these flaws would bother me less if I hadn’t read the novel. I can’t really be sure, but from my perspective they left me slightly deflated at the end.

Hold the Dark is nonetheless absolutely worth watching, and a worthy addition to Saulnier’s expanding filmography. The film is something of a fascinating puzzle box, and while I’m sure many will be bored by it (wishing for the heart-in-the-throat suspense of Saulnier’s previous films), I was drawn into its vaguely surrealistic, languid rhythms, and I’m still having fun piecing the thematic bits together. It might not be a film one revisits often, but it’s a fascinating work that attempts to draw a line between wolf and man, and maybe succeeds.