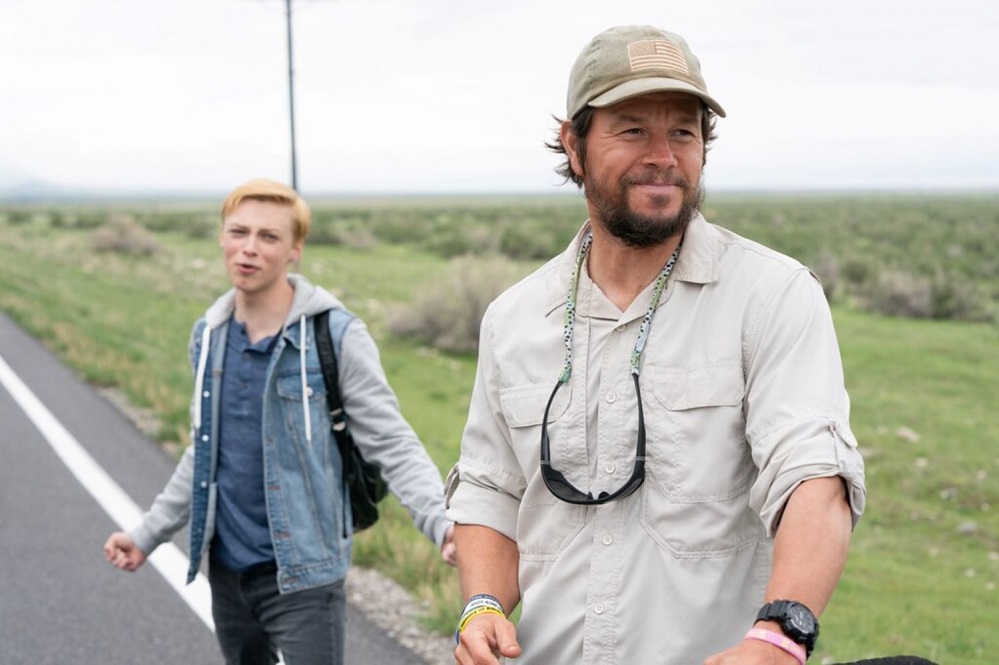 Is there anyone going into Joe Bell who doesn’t know the basic premise of the story? Was anyone walking into the newest Mark Wahlberg film wondering what the titular character and his son are doing hiking across America and why he was doing public speaking about bullying? Is there someone out there who asked for two tickets to Joe Bell with zero idea what it was about?

I ask this because Reinaldo Marcus Green’s film treats the story’s inciting incident as a surprise — a “twist” that is obfuscated in an immensely stupid way for nearly half the film’s runtime. On the off chance that you, dear reader, don’t know the story of Joe and Jadin Bell, I won’t spoil it here, but let me just say that it’s so incredibly easy to discern even from frame one that it’s baffling that writers Diana Ossana and the late Larry McMurtry would even try to cover the audience’s eyes with wool in the first place. It’s a miscalculation that entirely backfires, eliciting eye-rolling rather than the type of poignancy and shock it attempts to evoke.

Even if the “twist” wasn’t obvious, cliched and callous, the film would still stink because its lead is completely unable to bring to life what this role needs. Sure, it probably seems like an odd choice to pick a literal hate criminal who turned down a role in one of the best films of the century — one written by Ossana and McMurtry themselves — out of pure homophobia, but I can see a metanarrative where Joe Bell works as a paean to forgiveness and atonement for someone with as checkered a past as Wahlberg. I’m willing to extend that benefit of the doubt. What doesn’t work is that Wahlberg just isn’t adept enough to portray the internal struggle, self loathing and grief-stricken nature of a father who feels responsible for the painful events of his past. His character works best during the myriad flashback sequences where Wahlberg is allowed to let out some of that rage-fueled energy along with some general kinda-dumb bumpkin mentality — his best scene is when Jadin comes out to his father and Wahlberg’s Joe practically responds by saying “sure whatever the game is on in a few minutes can I get back to the TV.”

Wahlberg is one of the most limited performers to have the type of superstar A-list career that he has experienced. He’s pretty much great at three things:1 Angry, Dumbass and Angry Dumbass. His finest performances have been with directors properly channeling those energies (The Departed, Boogie Nights, and Pain & Gain, respectively). Joe Bell is a desperate attempt to break that mold and do something more interesting, but he’s not convincing enough to dispel his off-camera persona as the Douchebag Laureate of Massholes. It certainly doesn’t help that Wahlberg is doing an accent that very much sounds like a Bostonian trying to do a southern accent, despite his character being from Eastern Oregon. Every once in awhile he gets a moment that truly works against type, such as a fairly adorable scene where Wahlberg and Miller sing Lady Gaga’s “Born This Way,” which embraces some of the suburban dad comedic talents he has integrated into his repertoire, but for the most part Wahlberg is an albatross around Joe Bell’s neck.

It’s not helped by the fact that Reid Miller gives an immensely heartbreaking performance opposite Wahlberg. There’s immense pain behind Miller’s eyes in every scene as Jadin struggles with the hurt his father has caused him, even though he knows his father isn’t malicious. You can see how much his father’s lack of support kills him little by little to the point where it doesn’t even need to be said that Jadin almost wishes his father was a more openly bigoted homophobe rather than have this lukewarm lack of support. It’s even a clever choice to have the film be about Joe’s redemption not from being an openly hateful monster but rather a more casual, banal form of homophobic, eschewing some of the typical tropes of a typical Hollywood LGBTQ+ narrative. It’s a just a shame that the film is structured in such a misguided way and that Miller is acting opposite a 6 foot tall bottle of Samuel Adams Summer Ale — though Wahlberg is clearly a non-alcoholic version so as to avoid ruining his daily prayer and workout regimen. Miller’s performance is deserving of a better showcase.

One has to wonder if the original planned version of this film directed by Cary Joji Fukunaga and starring Jake Gyllenhaal (who both are credited as producers on the finished product), would have handled the material with more grace and avoided the pitfalls that Green’s finished product did. Nevertheless, the failure of Joe Bell falls far more on the screenplay and Wahlberg’s performance than Green’s ability as a director. It’s probably not a good sign for a film about the harm of bullying to only come to life during scenes where your lead actor is being an overbearing jerk to the people in his life. Joe Bell genuinely wants to be a plea for empathy and an anti-bullying call to action, but it falters in almost every way.