JUMANJI: WELCOME TO THE JUNGLE Review 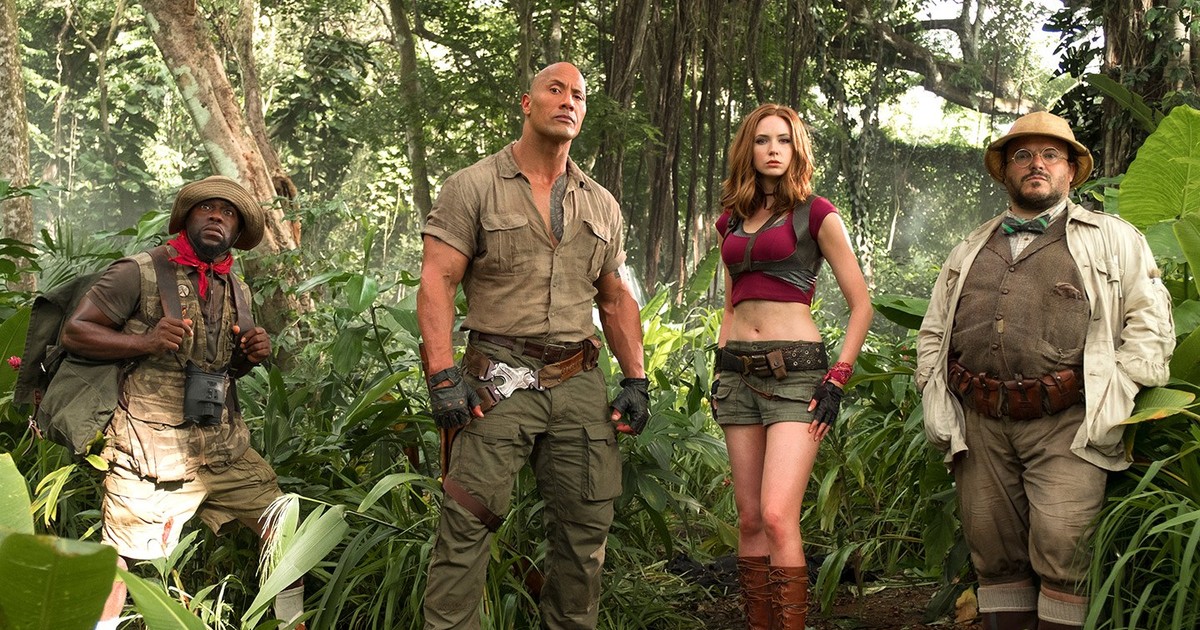 The first Jumanji film, starring the late great Robin Williams, was a film that came along a bit too late for me to “grow up with it”, but it was always something that I enjoyed when I caught it on TV.  It was a fun adventure film that easily caught my imagination, and was lifted by not only Williams’ earnest performance, but also the sure-handed direction by Joe Johnston, who largely manages to make you forget you are watching 1995 era CGI monkeys wreak havoc across a small new England town.  All of this is to say that, while I enjoy the original film, it is nothing even approaching a sacred text, and news of a long gap sequel starring The “Dwayne Johnson” Rock and Jack Black earned no umbridge from me.

The resulting film is not only not umbridge-worthy, but is a pretty damn good follow up to the original, expanding on the themes and world set up in that movie without feeling the need to explain all of the mystery away.

Picking up shortly after the first film ended, we find the mischievous board game once again in the hands of an unsuspecting victim.  After a quick inspection he tosses it aside, dismissing the board game as out of date before picking up his PS1 controller and diving into the realistic world of 16-bit polygons.  Not content to be tossed aside, as the teen sleeps the cursed game takes a new form… a game cartridge.  This despite the fact that he was earlier playing on a CD-based system, but no matter, he has a console that will take this cartridge and he quickly pops it in, ready to play.  A moment later we cut outside the house as a green flash of light fills his room.

Cutting to 20 years later we meet modern gamer Spencer (Alex Wolff), a nerdy wimp who does homework for onetime childhood friend and high school football star Fridge (Ser’Darius Blain) not because he is bullied, but simply because he wants his friend back.  Fridge has little time for the nebbish Spencer, and blows him off.  We quickly meet the self-absorbed Instagram princess Bethany (Madison Iseman) and the self-serious Martha (Morgan Turner), before each of them land in detention, which involves de-stapling a bunch of bins of magazines.  They quickly discover the ancient video games system and decide to take a break to play, which sets them on an adventure through the mysterious land of Jumanji.

Jumanji: Welcome to the Jungle is probably one of the better video game movies out there, despite not actually being based on a game.  Almost immediately anyone who has ever picked a video game controller will recognize the tropes that are being utilized here, including breaking down each human character into the basics of who they are, and then flipping the script on them when dumping them into their avatars.  The wuss is Dr. Smolder Bravestone (Dwayne Johnson); the guy who relies on his size and strength is diminutive “Moose” Finbar (Kevin Hart); the girl who is uncomfortable with physicality is the midriff-baring Ruby Roundhouse (Karen Gillan); and the vainglorious beauty queen is Jack Black, as Professor Shelly Oberon.  We have an NPC played by Rhys Darby who is unfortunately given little to do, but was good to see pop up in the film nonetheless.  The villain is an empty madman gifted with dark supernatural powers that allow him to control animals and insects (to icky effect, I might add).  The fact that he is empty is not a criticism, either, as I think it perfectly encapsulates the type of game that the kids are trapped inside.  The film has fun with the mechanics of gameplay, and the storytelling tropes that one encounters, such as missions, discovery of abilities, maps, the long-lost teen from the opening of the film (Nick Jonas), and numerous other challenges.  It manages to function as a film within the structure of a video game, which kind of seems like an impossible task, given how different those mediums are.

Besides being easy thematic fodder, the avatar assignments are comedic low-hanging fruit, especially when it comes to Jack Black, but the film manages to rise above what could have been eye-rollingly obvious comedy, also especially when it comes to Jack Black.  This is largely due to the fact that it never feels like the film is being cruel to its leads; like the game itself, the film wants these people to grow.  It puts difficulty in their path so that they can rise above it after falling on their faces, but it doesn’t kick them when they are down.  It’s pretty standard stuff, but the cast and film sell it well, and you can’t help but be invested at least a little bit.  The audience I saw it with, made up mostly of families, was pretty vocally along for the ride from start to finish, enjoying each twist and turn thrown at us.  Not that it does anything unexpected, but it does the expected well, which is a strangely undervalued and under-used commodity in a lot of modern blockbusters.

The director of the film, Jake Kasdan (Zero Effect, Bad Teacher), is a smart filmmaker and I think he does a good job of keeping the material just off-kilter enough to remain fresh and interesting, without sacrificing the emotional core of the film.  He mostly avoids falling into the trap that a lot of comedy directors do when they make the leap to action-comedy, which is that feeling that two people directed the film, one for action, one for comedy1.  The fight scenes are unfortunately shot and edited in a Bourne-lite style that is possibly hiding the action shortcomings of the actors. This is especially too bad considering the way they set up Ruby Roundhouse’s in-game skills, which would have made for some really fun sequences if we could see them.  The rest of the big action set-pieces are well shot and staged, and manage to be fun without being weightless; the stakes remain consistent throughout the film, while also not dwelled upon.

I also appreciated that Kasdan’s camera never dipped more than a toe into male gaze territory with Gillan, despite her short shorts and exposed midriff.  They don’t hammer home the calling-out of that particular trope of media, but they also don’t betray it, fulfilling her arc in a way that I found refreshing.  All of the arcs are handled nicely, bringing them home in a way that felt organic and earned, standard as they are.

Overall the film was itself refreshing, a breezy and enjoyable 2 hours that utilizes its actors well, avoids lazy callbacks to the original while nicely acknowledging it, and manages to earn every character turn, all within a video game framework.  I definitely recommend it to families looking for something other than (or in addition to) Star Wars this holiday season.

Dwayne Johnson's Latest Hangs on by its Fingernails