"To the Birds. Hallelujah!" 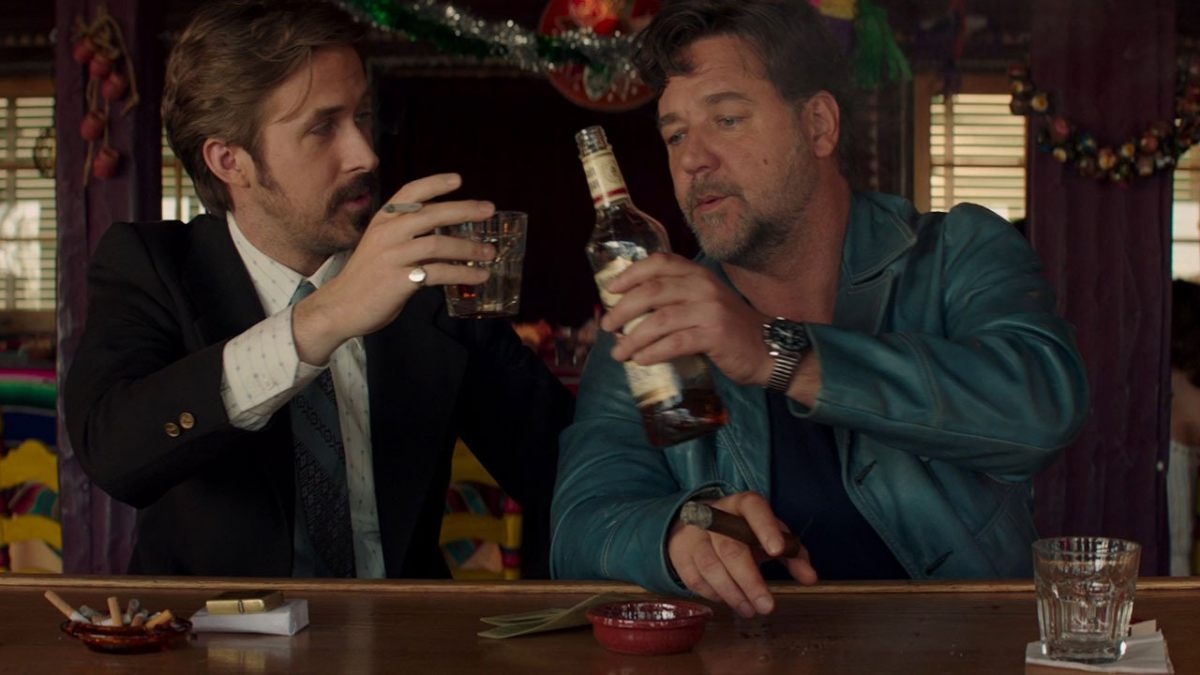 2016 has been a tough year.  It saw us lose artistic icons like Bowie and Prince, it saw the political discourse in our country steep into misogyny and racism, and it left a seemingly never-ending black cloud surrounded everything.  One thing 2016 did manage to bless us with is a fantastic year for film.  While there were plenty of terrible films (I’m looking at you Batman v Superman: Dawn of Justice), there were a plethora of great films to be found.

It’s been such a great year for film that this list felt impossible to make, especially since two of the films didn’t come onto my radar until this week.  I agonized over what films to leave out and what order to put the select films in, but I feel confident in the list as it stands.  With that said the following films deserve recognition having just missed the cut: Moana, A Stray, The Shallows, and Eye in the Sky.

So without much further ado, here’s the list of my 10 favorite films of 2016:

There are few directors working today that are more of a guarantee of quality than the Coen Brothers.  As charming and goofy as ever, Hail, Caesar! sees the Coens utilizing their impeccable craft to weave a tale of Hollywood intrigue that touches on topics of religion, politics, and economics, all without skipping a beat.  Featuring an all-star cast of Coen veterans (including George Clooney, Tilda Swinton, Josh Brolin, and Frances McDormand) and newcomers (Channing Tatum, Alden Ehrenreich, Jonah Hill, and Ralph Fiennes), the acting is immaculate.  Regardless of if it is a “lesser” film in their filmography, Hail, Caesar! is the Coen’s at their screwball comedy finest.

If anyone was primed and ready to dislike Rogue One: A Star Wars Story, it was me.  Like most sentient adults, I loathe the prequels, so another one sounded like nails on a chalk board, and director Gareth Edwards had yet to make a film that I truly enjoyed.  I have never been so happy to be so wrong.  The filmmaking is brave, the writing is intelligent and inspired, and the acting, particularly by Donnie Yen, Ben Mendelsohn, and Diego Luna, is outstanding.  Not only is Rogue One an astounding film, but it is far and away the most daring and jaw-dropping Star Wars film since the Original Trilogy.  In addition to being a great film on its own, Rogue One actually adds to the experience of watching the original Star Wars, adding new layers to the relationships and experiences of that film.  I’m thrilled to have a new Star Wars film I unabashedly love.

8.  Neither Heaven Nor Earth

As unnerving as it is breathtaking, French film Neither Heaven Nor Earth is one of the most unique theatrical experiences I’ve ever seen.  A meditation on the bewilderment and turmoil of war, Neither Heaven Nor Earth sees the investigation into disappearances of French soldiers in Afghanistan lead down paths of myth and mystery. I watched as multiple theatergoers walked out in disbelief at what they had just witnessed, and the film seemingly hunted for that type of reaction.  Less a wrecking ball and more a vice, Neither Heaven Nor Earth constantly ratchets up the tension as mounting confusion encompasses the characters as well as the audience.  Not specifically a horror film, it’s a film that defies labels and will leave you mystified throughout.

What Daniels (Daniel Scheinert and Daniel Kwan) have accomplished with Swiss Army Man is nothing short of breathtaking.  Expecting nothing more than a comedy about a farting corpse with a magic boner (which the film definitely delivers on), Swiss Army Man shocked me with its astonishing performances, an all-timer of a soundtrack, and a touching, goofy and heartfelt sincerity.  Daniel Radcliffe, portraying the aforementioned flatulent corpse dubbed Manny, is simply sensational both comically and dramatically.  It’s one of those performances that is insanely deserving of awards recognition, but never will have a chance due to the nature of the role.  To put it frankly, Swiss Army Man will have you laughing, crying, fist-pumping, and having intensely emotional reactions with something as simple as a fart.

No film experience in 2016 was more visceral and raw than Jeremy Saulinier’s Green Room.  A simple set up – members of a punk band have to escape from a club full of homicidal neo-Nazis—leads to a gory and savage maze running that escalates with every moment.  The cast is something special, with Anton Yelchin, Macon Blair, Imogen Poots, Alia Shawkat, and even the great Patrick Stewart giving something close to career-best performances.  Violent, gruesome, and brutal (whilst still displaying moments of beauty), Saulinier’s punk-infused bloodbath is a thrilling hour and a half that will leave you covering your eyes and terrified out of your wits.

I never saw the original 1977 version of Pete’s Dragon, so I had no nostalgic connection to this film going in.  I was delighted to find that, for all intents and purposes, the remake not only completely works as a standalone picture, but is the finest film to come out of Disney’s studio this year.  Filled to the brim with extraordinary performances (including one of the most spectacular CGI creations to date, the photorealistic Elliot the dragon), Pete’s Dragon emotionally wrecked me in ways I did not expect, whilst never becoming maudlin or overly sentimental.  In a year that saw an influx of poorly-timed and terribly received blockbuster reboots and sequels (Independence Day: Resurgence, Ben Hur, Blair Witch, Zoolander 2), it was refreshing to see something that could have sunk to the same referential lows as that, but didn’t. Instead, David Lowery and his team chose to fill every frame with vivid emotion and a sense of awe that reminds me of Spielberg  in the best possible way, and the film is all the better for it.  It’s an instant classic that is as moving as it is entertaining.

Justin Lin managed to do what JJ Abrams failed to do with the first two films in the Kelvin timeline: make a true Star Trek film.  Star Trek Beyond works both as an extension of The Original Series as well as a sequel to the Abrams films in a way I thought impossible.  The best blockbuster of the year, Beyond utilizes its action movie trappings flawlessly in order to service a revenge story that is as thematically rich as it is exciting.  Chris Pine, Zachary Quinto, Karl Urban and the rest of the cast handle the task of emulating their predecessors with incredible sincerity, while also bringing enough unique touches so as to not become a parody or impersonation.  It’s a difficult task to accomplish, but Lin’s direction as well as the script, by Simon Pegg and Doug Jung, manages to pull it all off.  Simply put, Star Trek Beyond would make Gene Roddenberry proud.

“Someone in the crowd could be the one you need to know, be the one to lift you off the ground” – Gorgeous and vibrant, La La Land contrasts its neon and Technicolor dreamscape with a story of how love and heartbreak, no matter how devastating, can be in service of our dreams and how some of our most profound experiences and relationships are fleeting.  It’s an awe-inspiring picture; one whose final ten minutes alone would be one of the most poignant films of the year.  Damien Chazelle’s direction is marvelous, continuing where he left off in Whiplash in his remarkable ability to weave music into his pictures.  The songs themselves are superb, with earworms like “Someone in the Crowd” and “A Lovely Night” being stuck in my head for days after the film.  The opening number, “Another Day of Sun,” stands as one of the single most insanely creative cinematic moments of the year, with Chazelle weaving his camera in, around, and above cars while his cast breaks into a perfectly choreographed song and dance, all in what appears to be one shot.  Both a tribute to the musicals of yore and a revolutionary piece of modern cinema, La La Land miraculously manages to be a perfect example of each.

My #2 film of the year was something I almost didn’t even see.  Casually dismissed because I didn’t like the marketing (a big mistake), Sing Street won my heart on a cross country flight and its musical and emotional charm were able to touch my soul in a profound way.  A story of a group of weirdos and outcasts who start a band in order to impress a girl or make friends, I fully connected with Connor and his struggles with every frame.  It is off the charts musically, with songs like “Up,” “Drive it like You Stole It,” and “To Find You” serving as impassioned glimpses into the lives of these teenagers.  Full of tenderness and heart, John Carney illuminates this world of misfit dreamers and breathes life into what could have been nothing more than twee nostalgia clichés.  Much like La La Land, It’s a phenomenal film that is pure love put to music and to screen.  It was, for two hours at least, the perfect antidote to a miserable 2016.

While determining the positions and selections for the rest of my list was a difficult task, the top spot was never in question—The Nice Guys, since I first saw it in May, is my favorite film of 2016.  It’s riotously funny, filled to the brim with pitch-perfect performances, and features one of Shane Black’s finest scripts to date.  Russell Crowe, Ryan Gosling, and 15 year old Angourie Rice headline a cast that’s comedic timing and chemistry is a marvel to behold.  It’s a genre defying (it’s currently listed as a “mystery-crime thriller neo-noir action comedy” on Wikipedia) masterpiece that perfectly blends its disparate elements into one of the most glorious all around films I’ve seen in my life, let alone just this year.  I’ve seen the film four times and it’s still as hilarious and compelling as it was on the first viewing.

The Nice Guys is also the perfect film for 2016, despite the film’s 1977 setting.  Knowing how the year turned out, seeing a film in which our protagonists have to watch on as the “bad” guys win despite their heroism is remarkably fitting.  However, the most important takeaway of the film isn’t this macro-view cynicism –It’s that Holland, Jackson, and Holly still managed to find their own happiness in spite of their surroundings.   It’s that level of personal positivity mixed with overwhelming pessimism that makes The Nice Guys the standout film of 2016.

So with that, I say “To the Birds. Hallelujah!”