THE LAWNMOWER MAN: An Historical Artifact That is Virtually Unwatchable

Get it? VIRTUALLY unwatchable? Eh? Eh? 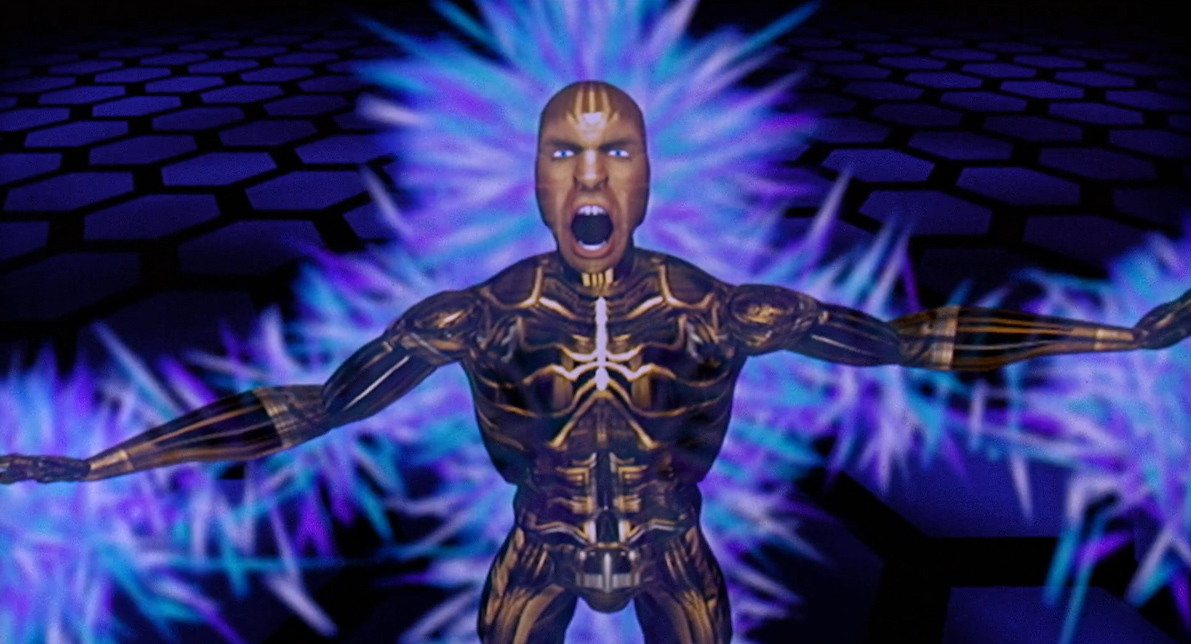 Last year, the company I work for started looking into doing virtual reality and augmented reality development. With things like Google Cardboard (neat) and the HTC Vive (freakin’ awesome) around, it made sense. As part of that exploration, one of our guys went to Anaheim for SIGGRAPH,1 an annual computer graphics conference. Companies come to show off their most recent hardware, software, and CG films, while researchers and developers present their academic papers. It’s pretty neat. But I had to smirk a bit listening to my coworker do his very cool presentation on what he had seen and learned at the conference.

You see, exactly twenty years earlier I attended SIGGRAPH in New Orleans. I was sixteen. What was the big deal at the conference that year, other than the yet-to-be released Nintendo 64? You guessed it: Virtual reality, and I got to play with some of the technology on display. I’m sure if I went back and put on those goggles I would find it laughable, but my mid-90s teenage mind was blown. It was so cool!

But, of course, that initial hype around VR fizzled. Some of it was running on what were at that time borderline supercomputers, processing horsepower that wouldn’t be available to the average Joe for years, and even then the frame rate was abysmally low. It was a recipe for nausea, and the goggles basically had teensy standard def CRTs in them. The technology had a long way to go. Now the tech has (mostly) caught up with the concept, and there’s tons of neat stuff going on with the medium which is pretty great.2 Still, it’s funny to see that same “world-changing” rhetoric being thrown around about the same thing, decades later.

But if you go back in time a few years past SIGGRAPH ’96 you’ll find a movie that was even more disconnected from reality than that early industry hype. Brett Leonard’s 1992 sci-fi horror film The Lawnmower Man is the kind of VR-centric film that could have only been made by someone with a hazy concept of what VR is and is capable of, aimed at audiences whose concepts of the same were even hazier. It’s a cyberpunk-tinged buzzword haphazardly shaped into a genre film.

The movie is based on an original screenplay with the rather on the nose title of CyberGod, but the producers apparently decided a buzzword wasn’t enough to put butts in seats, so they repurposed it as an “adaptation” of a short story by Stephen King. King’s “The Lawnmower Man” is way, way too thin to support a feature film, having to do with a poor sap who accidentally hires a supernatural employee of the ancient god Pan to mow his lawn and ends up chopped up by a magical lawnmower for his trouble. The Lawnmower Man has nothing to do with the tale it’s ostensibly based on, other than the fact that it’s centered around a guy who mows lawns and one of his victims gets mowered to death. A passing reference to a chunk of that fellow ending up in a bird fountain is the only direct reference to the story. While the film was originally titled Stephen King’s The Lawnmower Man, King sued over it, rightfully claiming that the film and the story had jack squat to do with each other.

Ditching the whole Greek mythology thing, the film starts off with Dr. Lawrence Angelo (a very young-looking, pre-Goldeneye Pierce Brosnan) doing some vaguely defined research involving intelligence augmentation and virtual reality. Presaging Chris Pratt’s hypocritical asshole turn in Jurassic World, Angelo is training super-smart chimps in VR combat, while at the same time self-righteously claiming to be against the exact thing he’s being paid to do. Inevitably, one of the chimps breaks out (wearing a hilarious RoboCop helmet) and murders a bunch of corporate red shirts. Angelo’s research is shut down.

Upset that his employer, the creatively named Virtual Space Industries, won’t support his desire to move from virtual murder monkeys to virtual murder humans, he does what any ethical and pacifist man of science would do: take advantage of an intellectually disabled person and trick them into being an unsupervised guinea pig in his basement experiments.

Jobe Smith (Jeff Fahey) is a Simple Jack-level cartoon version of a person with mental disabilities. He’s kind-hearted, childlike, friendly with kids, and easy to take advantage of. He even sports Simple Jack’s trademark overalls. I have to wonder if Jobe was a reference for Ben Stiller when making Tropic Thunder. “When I think,” says Angelo, “of what I might have accomplished with a human subject… I’ve got to find a way to continue with the work on my own!” Then he looks out his window and sees Jobe mowing the lawn. Lightbulb! Seriously, the scene plays out like that. Angelo is the hero here, right?

From there we jump to Angelo asking if Jobe wants to play the awesome video games in his basement. Jobe, being Simple Jobe, obviously says yes. So the experiments begin, and they are largely successful. The increase in Jobe’s intelligence is remarkable, enough so that Angelo brings the results of his spectacularly illegal and unethical research to his employers, who, basically being The Company from the Alien franchise, are very excited. “More! More!” they say. So Angelo brings Jobe to VSI headquarters to “play” in the his gigantic VR lab.

Angelo has Jobe do this one image matching game before deciding he’s ready to be strapped into the Murder Monkey Manufacturer.

As you might expect, VSI heavyweights become impatient with Angelo’s progress so, in a really dumbass move, they replace Angelo’s VR drugs with much stronger versions. Jobe starts hallucinating, reading people’s minds, and eventually moving physical objects telekinetically. Basically he becomes the “CyberGod” of the original screenplay, taking revenge on the people who wronged and took advantage of him as Simple Jobe, and making plans for world domination.

As you might have gathered, this movie is really dumb. Dumb isn’t always bad, mind you; movies can be fun and legitimately good while also being dumb. The Lawnmower Man is not one of those movies. It’s a lean 103 minutes, but feels much, much longer. I remember enjoying this film as a kid, but now I wonder how I had the attention span. It drags. I haven’t seen the Director’s Cut, but apparently it’s well over two hours and I’ve heard it described as “punishing.” I can’t even imagine. Normally a movie this movie this weird and disjointed and tonally messed up would hold my attention thanks to novelty alone. But this? Oof.

For his part, Brosnan is game. He manages to take the goofy material seriously and doesn’t phone it in. He’s charismatic, despite the obliviously amoral things the film has him do, and comes out mostly unscathed. Jeff Fahey is less lucky. He’s given one stereotype to play (the genial man child) and then another (the alternately emotionless and wrathful mastermind) and comes out looking goofy in both roles.

The Lawnmower Man is also unfortunate in that it is a low-budget film with a lot of CGI that happened to come out between two big budget films that were CGI groundbreakers: Terminator 2: Judgement Day and Jurassic Park. Even taking into account that it’s mostly depicting virtual worlds, the CGI in this movie is painfully awkward and probably seemed dated before it was out of theaters. At the time I thought it looked amazing, but I was never the brightest kid.

But enough with this nonsense. Why are we really here? Other than (briefly) having Stephen King’s name attached, why do people remember this movie at all? Why, the virtual reality of course! The film’s version of VR is very much of its time. It’s the hot new thing, opening up a whole new world — or worlds — of possibilities. It’s powerful enough that it could warp the nature of the universe. In reality, VR involves strapping a couple of computer monitors to your face, but in the early 1990s it could be anything! It can mainline massive amounts of data into your brain, it can give you magic powers, it can drive you mad, and if you decide to somehow upload your consciousness into the network it will suck your physical body dry, leaving a desiccated mummy. The Lawnmower Man is stuck in an awkward place where it’s in awe of a technology that it doesn’t understand, ending with Angelo delivering a monologue about how VR can be used for the benefit of humanity, while also feeling obligated to cater to the unfortunate luddite tendencies of the sci-fi horror genre. “You can’t play God like this! Also, playing God like this is pretty neat and will make the world a better place.”

The Lawnmower Man came out of that first wave of VR hype and it shows. Now we’re in a second wave, and what do we have coming to theaters? Why Stephen Spielberg’s big budget and nostalgia-fueled adaptation of the VR-centric Ready Player One. Considering all of the 80s and 90s references that show up in the trailer for that film, I may be a tad disappointed if Jobe the CyberGod doesn’t make a cameo. The movie’s not out yet, Steve. You can add him.

After all, anything is possible in virtual reality.

A Requiem for SLEEPWALKERS Previous
Review: IT (2017) Next