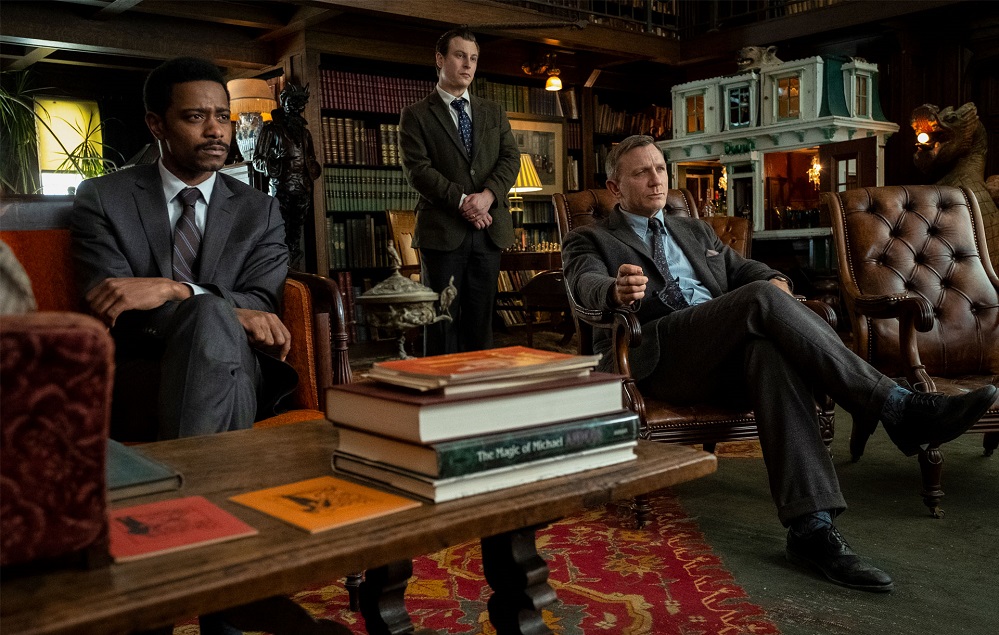 Knives Out opens with the reveal of the death of mystery writer and wealthy patriarch, Harlan Thrombey (Christopher Plummer). An apparent suicide due to a slit throat, the police believe it is an open and shut case. Having received an anonymous request and an envelope full of cash, renowned private detective Benoit Blanc (Daniel Craig) arrives on the scene looking into any possible foul play despite the police’s apprehension to reconsider the case. Though the family all agrees that the timeline and the physical evidence points to suicide, the family’s potential motives — and everyone has a motive — and slight inconsistencies in the narrative force Blanc and the police to dig deeper. It’s the classic whodunit setup: who killed Harlan in his study with the knife?

The star ensemble cast that makes up the Thrombey family add a ton of color with hints of menace that drive the film. Chris Evans, as Ransom, gets to let loose and play a smarmy asshole, a complete 180 from the role that has defined his career the last decade. There’s Jamie Lee Curtis and Don Johnson as Linda and Richard, the eldest daughter and son-in-law, respectively, who are the epitome of “born on third base but think they hit a triple” self-made conservatives. Michael Shannon gets to play against type as a somewhat ineffectual failson whose entire career revolves around riding his dad’s coattails as the head of Harlan’s publishing company. Channeling her inner Alexis Rose, Toni Collette rounds out the family as Harlan’s widowed daughter-in-law who is a wellness guru and instagram influencer who mooches off of the family. Rounding out the family are the kids: The Book of Henry’s Jaeden Martell as a twitter troll — who I’m sure wasn’t written in response to The Last Jedi backlash — and Katherine Langford as his far more liberal cousin.

Also note: the A+ costume design work by Jenny Eagan

At first, Craig’s performance as Blanc feels a bit distracting. His Foghorn Leghorn drawl is, well, cartoonish and broad. But once it settles in, it winds up really fitting the character, who is a famous, larger than life private eye. Writer/director Rian Johnson is drawing a lot of influence from Agatha Christie, and the southern-fried schtick feels in line with the exaggerated features and personality of one Hercule Poirot. It helps that Craig fully commits and Johnson wrings out some great laughs out of Blanc’s idiosyncrasies, all without undermining the character. We believe that this man would go on a long nonsense rant about how a mystery is like a donut with another donut in the middle, without ever doubting that he’ll get to the bottom of Harlan’s death. It’s a tightrope that the film perfectly balances.1

Craig may be Johnson’s Poirot, but the true star and lead of Knives Out is Ana de Armas as Harlan’s nurse, Marta. Johnson writes Marta as an immensely sympathetic and conflicted woman, both “part of the family” while also technically an employee. Despite the Thrombeys telling her that she’s one of them, they constantly treat her poorly, forget where she immigrated from, condescend to her, and force her into awkward political conversations. De Armas plays this all with aplomb, exuding honesty and a pure heart in every scene. The flashback scenes conveying her friendship with Plummer’s Harlan are a prime example of this, as the pair genuinely love each other. De Armas’s warmth radiates throughout the film, and Marta is clearly the film’s soul.

This style of storytelling and filmmaking plays to Johnson’s biggest strengths. He’s always looking to play with expectations, whether that is via subversion or just exploding straight through them, and that’s the core of the mystery genre. Similarly, Johnson is great at conveying information, irony, and humor through visual language, which translates perfectly to the foreshadowing a film like this requires. His tendency to lean into broadness when it comes to his characters also befits a whodunit like this, as the individuals need to pop off the screen immediately and layers can be added as the story goes on. In addition, his inclination to insert himself as a character into his films (Rose from The Last Jedi might as well be named Rian Johnson) is perfectly calibrated here via Noah Segan’s Trooper Wagner, a comic-relief murder-mystery novel fanboy who is excited to be a part of one involving his favorite writer.

This is all to say that Knives Out is as good as advertised. It’s an immaculately crafted and meticulously detailed version of what it’s going for: a pulpy, breezy Christie-esque murder mystery featuring playful performances and a surprising amount of heart. Johnson understands the genre perfectly; his adoration of these styles of stories manifests in every detail and frame of the film. This is a film to simply experience, so stay unspoiled on this one. Isn’t half the fun of a whodunit trying to figure out who done it and seeing how right or wrong you are?

Review: FROZEN II Previous
Review: A BEAUTIFUL DAY IN THE NEIGHBORHOOD Next