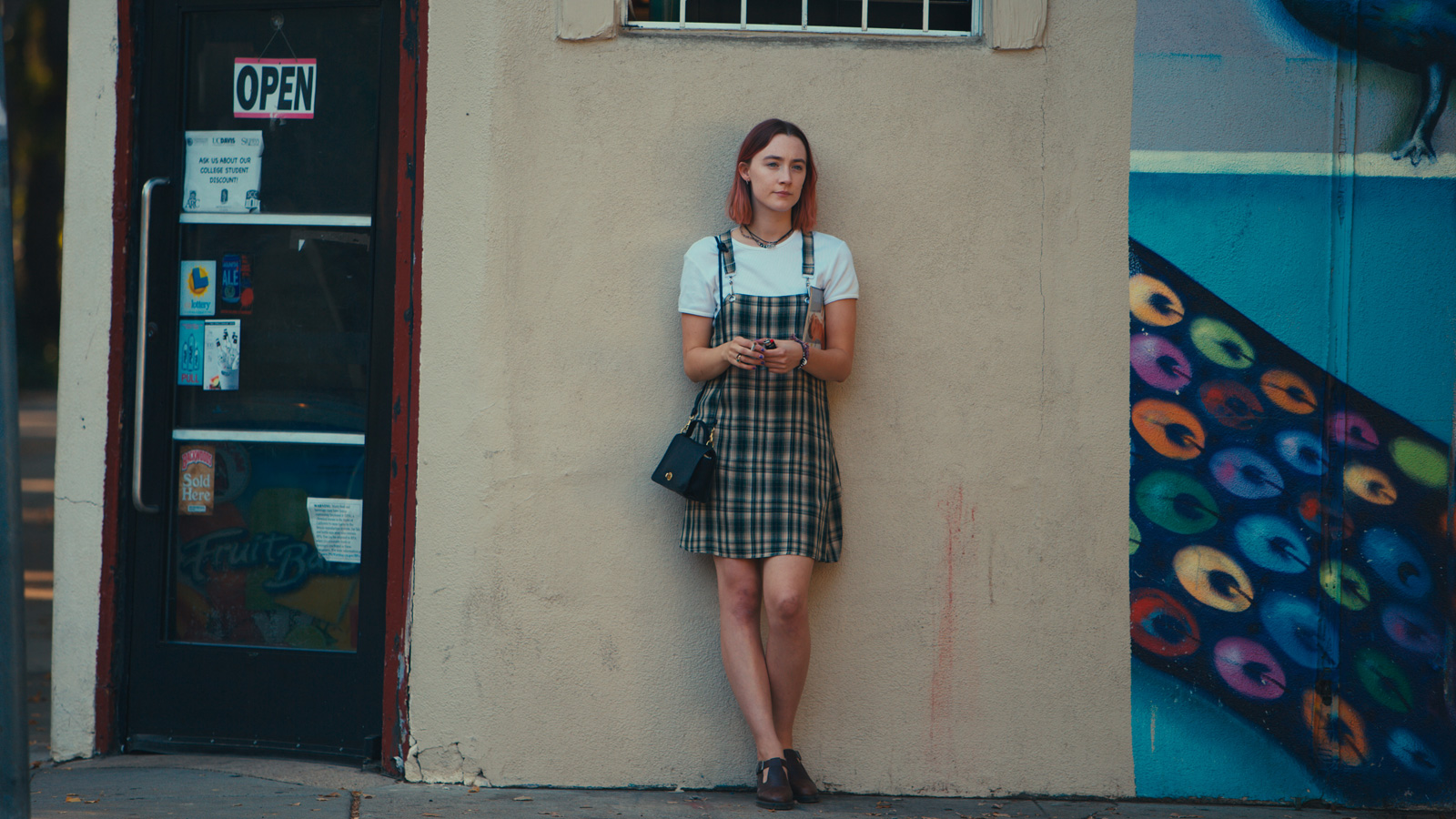 “What if this is the best version of me I can be?” asks eighteen year-old Lady Bird McPherson in a moment of intense vulnerability (she’s trying on prom dresses).  Her mother, the one person in the world whose approval Lady Bird craves most, is tired from a double-shift at the psychiatric hospital and months of trying to keep her troubled daughter in line.  The most she can conjure is a scowl of deep skepticism.

This is Lady Bird.

Greta Gerwig’s feature length debut is a deeply perceptive, unflinchingly honest, but also sweet and funny coming-of-age tale.  It’s about those chaotic teen years when young people, girls and boys both, desperately try to distance themselves from who they are and where they come from.  They cast about for the “best version of themselves” that they might become, trying on and discarding new identities like prom dresses.  They claim to like bands they’ve never heard of and make “friends” with people they hate—anything to avoid confronting the uncomfortable possibility that they are already who they will always be.  The only people not caught up in this charade are their parents, who’ve had them pegged for years… or have they?

Lady Bird is so desperate to escape her present and find her future self that she bristles at the mere mention of her birth name (Christine).  She lives in Sacramento, but dreams of college in the Northeast, where she imagines more sophisticated and cultured people congregate and, who knows, maybe talk about literature and poetry or something.  Conspiring to keep Lady Bird local, however, are her unemployed father, her family’s strained finances, mediocre grades, and a succession of friends and authority figures subtly (or not so subtly) telling her to stop dreaming.  The most skeptical of these is her own mother: a walking contradiction of a woman, memorably and accurately described by one character as both “warm and scary.”  She wants what’s best for her daughter, yes, but maybe her expectations are too low and they’re actually killing Lady Bird’s self-esteem.

At the center of this tempest is Saiorse Ronan.  At just 23, Ronan is already one of the finest actors working today.  For proof, you need only compare her live-wire performance here to her staid, Oscar-nominated turn in 2015’s Brooklyn.  There, Ronan was a stoic stranger in a strange land, burying uncertainty and loneliness behind a placid exterior.  The depth of her emotion played out almost entirely behind Ronan’s striking gray eyes.  But in Lady Bird, Ronan is something altogether different: a raw nerve, crashing through the screen with a desperate nervous energy, disarming vulnerability, and starry-eyed romanticism.  The effortlessness with which Ronan can execute such disparate performances is astonishing.  Add in that there’s nary a hint of her native Irish accent anywhere in Lady Bird and it’s almost too much.

Opposite Ronan, and matching her beat for beat, is Laurie Metcalf as Lady Bird’s fierce but loving mother, Marion.  Metcalf, probably best known for her role on the 90s sitcom Roseanne, has quietly been one of America’s best character actresses for three decades.  Like her Roseanne co-star John Goodman, Metcalf is a trained theater actress who specializes in bringing big personalities to life with a counter-intuitive subtlety.  But while Goodman has become something of a big screen legend, Metcalf’s mostly been confined to the stage and small screen. Lady Bird, hopefully, will go a long way to rectifying that injustice, because Metcalf is a tour de force here, dominating in scene after scene.  She moves so stealthily between nurturing and gutting that you don’t realize what’s happening until you’re already cringing (or crying).  It’s a masterful performance.

Rounding out the cast is a murderers’ row of underrated Hollywood talent.  Up-and-comers Lucas Hedges (Manchester by the Sea) and Timothée Chalamet (the upcoming Call Me by Your Name) play Ronan’s would-be suitors, one a sensitive drama geek and the other a brooding bro-cialist.  Veterans Lois Smith (Minority Report) and Stephen McKinley Henderson (Lincoln) are Lady Bird‘s sympathetic teachers.  Special attention should be given to Henderson here, who is quietly devastating every time he shows up on screen.  He also delivers what is probably the best joke in the whole movie.

But, of course, the real revelation here is writer-direcotor Greta Gerwig.  Gerwig’s skills in front of the camera have been apparent for quite a while, but with her first feature length credit she shocks by operating at a level comparable to the likes of Wes Anderson, Sofia Coppola, and Richard Linklater.  (Lady Bird, in fact, very much feels like a synthesis of these three, combining Linklater’s loose authenticity, Coppola’s weighty insight into teen girls, and Anderson’s gift for comedy.)  In addition to drawing career-highlight performances from her cast, Gerwig’s composition, camera movement, and editing are a master class in effective but un-fussy direction.  She doesn’t make herself the star of the show—as many of her contemporaries might have—but if you’re looking for it, it’s apparent that every choice she makes is both carefully considered and hugely effective.  It’s truly a stunning debut.

So stunning, in fact, that it feels like a foregone conclusion that Lady Bird will be part of the conversation for years, or maybe even decades to come.  Like the best coming-of-age films, Lady Bird is at once both highly specific and unquestionably universal.  It is so uncanny and relentlessly entertaining in its depiction of teenage life that comparisons to the best work of John Hughes seem inevitable.  And why not?  Saiorse Ronan’s Lady Bird is a veritable post-grunge Molly Ringwald, complete with red hair (courtesy of a terrible early-aughts dye job).  All at once, she’s lovelorn (Sixteen Candles), coping with overbearing parents (The Breakfast Club), and trying to escape working class roots in a city of rich twits (Pretty in Pink).  It would come as no surprise if, in ten to fifteen years, up-and-coming directors start citing Lady Bird as a formative inspiration.

I’ve barely begun to scratch the surface of what Lady Bird has to offer.  There’s a strong sense of time and place—post-9/11 California—that’s worth discussing. There are also the hints of larger stories around the margins, the way that every character in Lady Bird’s orbit is undergoing their own crisis and could be the star of their own Lady Bird.  It’s intriguing what Gerwig hints at but does not say.  And then there’s the low key commentaries on class and white privilege, both of which cannot be ignored as forces in 2017.

All of which is all to say: Lady Bird offers everything you could ask for in a film—laughter, tears, beauty, and truth—and delivers it in a confection so light and agreeable that it might take hours or days before the enormity of it all really sinks in.  It’s a masterpiece, and easily one of the best films of the year.  Go see it immediately.

Guardians, ghosts, gamblers, and gill-men. What more do you want?