Does It Look Like It’s Our First Time? Revisiting GOLDFINGER 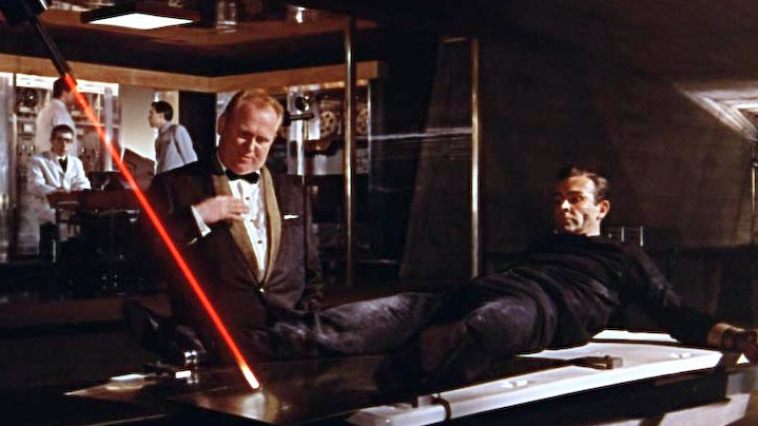 Welcome to the third entry in Does It Look Like It’s Our First Time? a James Bond retrospective. Normally my fellow Lewton Bus writer, Allen Strickland would be joining me. However, after the last review he was kidnapped and is currently being held hostage by SPECTRE agents. Have no fear, we have our best people on the case. In the meantime, I shall be conducting this review solo. So without any further delay let’s take a look at, Goldfinger.

We open with Bond somewhere in Latin America as he swims into a restricted area and sets some explosives. After changing out of his wet suit, revealing he was wearing a tuxedo underneath the entire time, he goes into a bar to wait for the detonation. The bomb goes off and, in his typically suave fashion, he ignores the ensuing chaos. We then find out he was there to stop a heroin smuggling operation. Before getting on a plane to leave he goes to his latest hookup (dear God, let’s hope nobody tells Bond about Tinder) only to find out she has betrayed him. After the ensuing fight, in which Bond electrocutes nameless henchman 3,486 in a bathtub, we see him finally leave before transitioning to the opening song.

As for the intro, I absolutely love the simplicity of it. No bright visuals that feel like needless attention seeking. Just a model painted in gold as scenes from the movie are projected onto her. Honestly, it feels a lot less skeevy than some of the other intros that make it feel like you’re at a strip club. Set to the soundtrack of the title song (which I’ll get to next) and you have what is my favorite intro so far in the series.

Oh my God, how I love Shirley Bassey’s voice. Seriously, her voice mixed with the horn section gives me chills every time I listen to the title song. In my opinion, her and Eartha Kitt have some of the best voices from their era. Fortunately, this isn’t the last we will hear from Bassey as she sang the theme for two other future Bond movies. Which two? Well, you’ll have to stick around and find out. Or you can Google it, that works too, I can’t stop you.

The plot is pretty straight forward, if not a touch silly in its execution. Auric Goldfinger is a man of many interests, with gold being the chief one. As such he has quite a collection of gold spread out among many countries, the price of said gold varies on which country it is in, because of his (Goldfinger) spread he can profit by selling the gold in whichever country the gold is worth the most in. Because of this Goldfinger concocts Operation Grand Slam in which he plans to render all the gold in Fort Knox unusable for decades which will make him richer and help China in the economic fallout. It’s a simple plot but is still a tad silly, especially when compared to the previous film.

Auric Goldfinger is absolutely merciless, killing an entire room of people without batting an eye. However, his character is still somehow forgettable despite being part of one of the most iconic exchanges in the series. He doesn’t seem to demand as much attention as some of the other characters and because of that fades into the background for me. Interesting side note though, every one of Goldfinger’s lines were dubbed as Gert Fröbe didn’t speak much English.

If I had to choose between Goldfinger and his chief henchman Oddjob, I would choose Oddjob in a heartbeat. The character for some reason really captures my attention even though he doesn’t have a single line. Perhaps it’s his presence. Or maybe it’s his razor lined hat that can kill instantly. Whatever it is, he is definitely my favorite henchman of the series so far.

There are quite a number of Bond girls in this movie. The first one we meet is his unnamed lover from the cold open who he eventually uses as a human shield (such a caring gentleman our Bond). The second one on the list is Jill Masterson, a former assistant of Goldfinger’s. After Bond tracks down and ultimately convinces Jill to let him interrupt Goldfinger’s rigged game of Gin, he seduces her and takes her to bed. However, it was not meant to be. After Bond is knocked out he wakes up to find that Jill has been murdered. The third one we meet is Tilly Masterson, Jill’s sister who is hellbent on revenge for the murder of Jill. Despite the fact that she didn’t have much screen time, her story was the one that interested me the most. After all, who doesn’t love a good revenge story? Unfortunately, she, like her sister, is killed by Oddjob after she is struck by his hat. Finally, we have Pussy Galore (*laughs for eternity*) a pilot who works for Goldfinger and leads a team of all female pilots called “Pussy Galore’s Flying Circus.” What is interesting about this character and is rather progressive for the era (1964), is that Pussy Galore is strongly hinted at to be a lesbian. Her motivations for working for Goldfinger are kind of typical but her portrayal is strong.

As usual, Sean Connery kills it as Bond. In the previous film, we saw him beginning to get used to his role. This is where he finally fully embraces it and you can tell he is having a great time. He’s quick with the quips, fast on his feet, and as always dangerous. This is definitely his best performance so far as Bond.

Okay, now things are getting kind of fun in the world of gadgets while remaining within the possibility of reality. Along with the gold brick that Bond is given as bait, he is also issued an Aston Martin DB5 (God, I want this car.) “with modifications”. These modifications include: a smokescreen, oil slick, a homing device and tracker, bulletproof windows, a rear bulletproof screen, a revolving license plate (The director Guy Hamilton came up with the idea after being issued a ticket.), front facing machine guns, wheel spikes, and my favorite feature, a passenger ejector seat.

While there aren’t many large action scenes there are two that really stick out to me. The first one is when we get to see the Aston Martin in all its glory. This is the first time we get to see Bond using various gadgets in his car to escape from random people and its great. However, the other scene that sticks out does so for a not so great reason. The entire Fort Knox scene, this is mainly because of the reactions of the soldiers who are supposed to be “dying”. There are parts of this that look like something you would see in a comedy. It takes you out of the action and ruins the mood of the film.

To be honest, none of the locales really stuck out to me other than Fort Knox.  Interestingly though, the Fort Knox set was so accurate that the controller of the real Fort Knox sent the production team a letter congratulating them on how accurate it was.

Easily the most iconic moment is when Goldfinger has Bond on the table with a laser threatening his life and other shall we say, things. The exchange between the two has become one of the most iconic ones of the entire series. “You expect me to talk?” “No Mr. Bond, I expect you to die.” That line as delivered by Goldfinger will send chills up your spine.

I would say that this ranks somewhere in the middle of the cringe factor between Dr. No and From Russia with Love. While not quite as bad as Dr. No, it’s just cringey enough. The main part of this for me anyway is due to the character of Pussy Galore, and not just because of her name. While I understand that Bond is supposed to be suave, sophisticated, seductive, a “man’s man,” it felt completely unnecessary for Bond to seduce Pussy and somehow change her sexual orientation. It was just uncomfortable and wasted what could have been a great LGBT icon. I can think of several ways he could have convinced her to help him without the whole change.

It’s definitely not as good as From Russia with Love. But to be fair, that’s a high bar. There were several cringey moments and, to me at least, it had a forgettable villain. However, there was still solid camera work, action sequences, and acting all around. Plus, it introduced us to the Aston Martin, which is as amazing as it is now iconic. Overall, it’s a step down, but definitely isn’t the worst of the films.

That’s all for this week! Will Thunderball be an improvement over Goldfinger? Will James Bond ever settle down? Will Allen finally be rescued from the clutches of the sinister SPECTRE? Tune in next week for the next exciting installment of Does It Look Like It’s Our First Time?

The Bus Stops Here, Episode 6: The Evolution of James... Previous
LIFE Review: The Banal Frontier Next