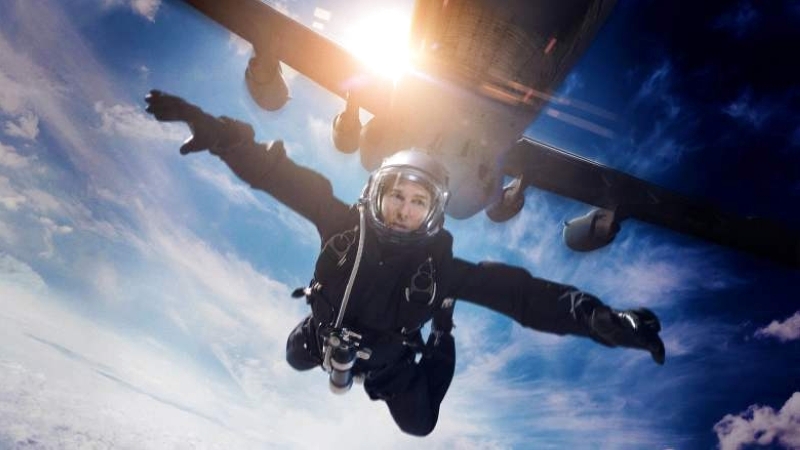 Early in Mission: Impossible – Fallout, the sixth film in Tom Cruise’ flagship juggernaut of an action franchise, a package is delivered to our hero, Ethan Hunt. The passcode to receive the package is an exchange involving a paraphrase of a very old quote of unknown origin:

Fate whispers to the Warrior,

A storm is coming,

And the Warrior whispers back,

I am the Storm.

And while the quote may seem like just a random, cool-sounding phrase, it sort of feels of a piece with what Fallout is actually trying to say about Ethan Hunt. Yes, after five full films, for the first time, Fallout is really attempting to go there and find out what makes Ethan Hunt tick. And while it is careful to not dig too deep and continues to paint his character in fairly broad strokes, for the first time he feels like something more than merely an avatar for the aging action star who plays him — though he is still very much that as well.

Fate whispers to Ethan Hunt, the Warrior. He can’t help but put himself in harm’s way if it means saving lives, or even just one life. He allowed the one true emotional connection he ever had be lost to further that purpose. And as much as it hurts him personally, he’ll keep on doing it, because somebody has to. To reference Grant Morrison’s seminal superhero comic All-Star Superman,

And as such, Fallout is also kind of the first Mission: Impossible movie to confront the nature of its title and the Impossible Mission Force itself. As Angela Bassett’s CIA Director Erica Sloane intones, “That’s the job.” The IMF is doing something nobody else would even be remotely capable of on their best day, and if they need to die to make the impossible happen, from her perspective they should do it. This world of spies and terrorists and assassins is a hard one, and with anarchy and suffering in the name of peace constantly a threat, someone needs to be able to take that next step.

Which is why, the movie argues, we need a man like Ethan Hunt. Alec Baldwin’s Alan Hunley tells him that his desire to save all lives, especially of those closest to him, is both his greatest weakness and his greatest strength. And just as Tom Cruise continues to do insane, death-defying stunts to please his audience, Hunt continues to do the impossible, with his one true fear being letting everyone down.

I won’t dig too much into the plot of Fallout here, except to say that it is a full-on direct sequel to director Christopher McQuarrie’s own excellent Mission: Impossible – Rogue Nation, with additional plot threads reaching as far back as J. J. Abrams’ Mission: Impossible III, and that revisiting the previous three entries wouldn’t hurt as a primer for this one. Somewhat surprisingly, McQuarrie, as the first filmmaker in the history of the franchise to return for a second go-round, is completely disinterested in recreating what worked for him the first time. He spoke in interviews of wanting to feel like a completely different filmmaker to keep with franchise tradition, and he succeeded with flying colors. For while all the craft and action and practical stunts that define the franchise’s later entries are still present, the tone and feel has changed completely. This is a much harder Mission: Impossible, one with a less vibrant color palette (with Annihilation cinematographer Rob Hardy stepping in for the veteran Robert Elswit), and a far harsher, more percussive score (Lorne Balfe stepping in for McQuarrie’s regular composer Joe Kraemer), and a generally harder-hitting, grittier tone. The punches and shots and hits and crashes in this one hurt, in a very direct visceral way. The plot itself is a series of endless twists and turns and reversals — maybe the most spy-movie-y the franchise has ever been — and coupled with the magnificent stunts, excellent chases and hard-hitting action, creates easily the most intense film in the franchise. As I left the theater, I needed a moment to come down from the intense roller coaster ride of interlocking suspense and tension.

As for the performances, most of the returning cast is splendid. Cruise remains as determined and intense as ever as Hunt, really nails Hunt’s slightly more layered moments and moral quandaries here, and also continues to subject himself to the endless volley of physical punishment that has defined Hunt’s post-Ghost Protocol reinvention as a stumbling superman. Simon Pegg’s Benji continues to be the requisite amiable comic relief, even if this film is of a darker sort than the last, and Ving Rhames provides a surprisingly emotional component to the film as Hunt’s only remaining costar from the original film, Luther Stickell. Rebecca Ferguson returns as Ilsa Faust and while her arc is a bit less convoluted than last time, she continues to sell the intensity and elusiveness of one of modern cinema’s few answers to the femme fatale archetype. Sean Harris is still basically just playing Hunt’s Moriarty in former Syndicate head Solomon Lane, but he does quiet, hissing evil quite well.

The new additions to the cast include Henry Cavill, who gives the best performance of his career as mustachioed CIA assassin August Walker.1 He’s the anti-Hunt, in that he’s primarily focused specifically on the job, the way Sloane likes it, and he believes the end justifies the means. Cavill oozes both the mundanity of a middle manager, thanks to the mustache, and the cold steel of an assassin. The much ballyhooed bathroom fight from all the promos does really live up to the promise of Cavill reloading his fists before reentering the fray. Bassett is, well, Angela Bassett as Sloane and she Angela Bassetts the hell out of that role, turning what could’ve been a generic authority figure wallpaper role and filling Sloane with authority and a sense of purpose.

It’ll be interesting to see what happens in the future with this franchise. Fallout ends on a note where adventures could potentially continue, but it also feels in a lot of ways like an attempt to round the series off nicely and give it something to tie it all together. I imagine this’ll be McQuarrie’s last time around, and if so, I salute him. The third act of this thing must be seen to be believed. The movie can be a bit slow in the early goings, and I’m not sure all the insane twisty reversals in the plot fully work, but it all builds to the biggest action scene this franchise has ever had and helps cement the Mission: Impossible franchise as arguably the best modern big-budget action series. In a world where we get as many incoherent, poorly made action movies as we do a year, we need people like Ethan Hunt.

They won’t let us down.

Pictured: Not Letting Us Down

MISSION: IMPOSSIBLE and the Value of Vulnerability Previous
VENOM Gets a Turd... I Mean Third Trailer Next