Your Mother Was an Ewok, and Your Father Smelt Of Bantha Poodoo

Revisiting the CARAVAN OF COURAGE 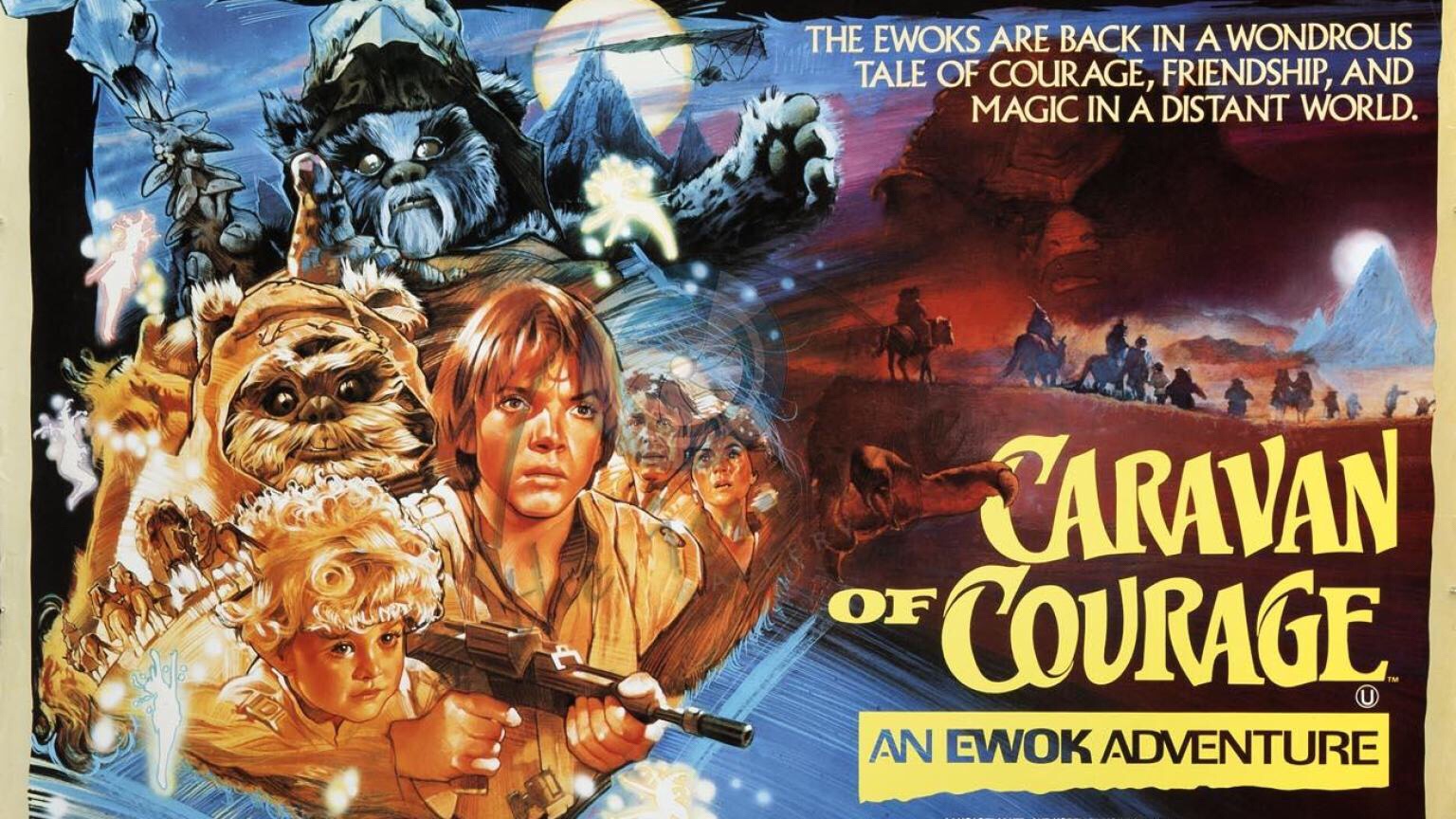 I doubt many people over the age of twelve would cite the Ewoks as their favourite characters in the Star Wars saga, but I’ve always been a little puzzled at the furor that arises among some fans when they are brought up. Just because they are cute and cuddly teddy bears doesn’t mean they can’t also be fearsome warriors, ready to band together and escort two lost children across Endor on a rescue mission to defeat the giant Gorax with the aid of a magic rock and a faerie Wistie.

Mace, cosplaying Rebel Luke on a mission to save his parents

If you’ve never seen either of the two made-for-TV Ewoks films, you aren’t really missing out – while not nearly as infamously bad as the Holiday Special they also aren’t quite good enough to recommend to all but the most hardcore Ewoks fanboy or girl. But, if you’re going to watch one of them, watch Caravan of Courage1 which is the best of the two, and least egregiously assaults the (previous) Star Wars canon.

Watching the movie as an adult most of my enjoyment is probably wrapped up in nostalgia, that old fluffy blanket, but I think the film generally works as a family adventure, with a mostly functional narrative wrapped around a few memorable moments. After crash landing on Endor Mace2 and his sister Cindel are separated from their parents, who search frantically for them in the forest and around the wreckage of their crashed ship. Unable to find the kids, they are soon chased off by the Gorax, a hairy giant looking for a midnight snack.

The next morning we join the Ewoks and, thanks to some narration by everyone’s favourite exposition snowman Burl Ives, we learn that Deej Warrick is looking for his own missing children. He soars into the sky on a hang glider, spots the crashed ship from high in the sky, and after finding and rescuing his sons returns to investigate the downed starcruiser, only to find the kids hiding in the ship.

He of course takes them back to the Ewok village, possibly to keep as pets, possibly to roast the next time a Golden God falls from the sky.

The first half of the film drags like two Ewoks caught on the foot of an AT-ST thanks to a mysterious sickness taking hold of Cindel. This subplot may serve the story by allowing Mace the opportunity to learn to begin to trust the Ewoks, but doesn’t ever feel like it has any stakes. However, once they figure out where their parents are (with the help of an Ewok Shaman) and decide to rescue them from the giant Gorax, the story picks up and becomes something a few steps closer to a rousing adventure. It doesn’t become a rousing adventure mind you, but for an 80s TV movie it does alright.

Made for relatively little money, it often feels small compared to what we were used to in the saga even then, but ILM still did some decent creature work throughout the film, most notably with the Gorax, though even its pet—looking like a hybrid of ALF and a Rodent of Unusual Size—was pretty effective. The ground-bound Ewok village, and the very “shot in a field behind my house” look of much of the film are the main culprits of the boxed in feel of the film, though part of this is likely also due to the 1.33:1 aspect ratio which feels positively claustrophobic in these days of widescreen TVs.

There are also some odd choices and inconsistencies with the theatrical films, especially given that this was a Lucasfilm production through and through, with many Star Wars alumni working in various capacities on the film, and ILM handling the effects. Things like: Mace wearing something very similar to rebel pilot gear (and even looking a little like Mark Hamill in some shots); his blaster being referred to as a gun, and sometimes having the wrong sound effect when firing. There’s also the fact that the Ewoks seem to have magic, which while it could be explained away as them tapping into the Force, seems a little odd. I’m sure there are others, but these are the ones that jumped out at me on this viewing.

Apparently the movie is supposed to take place 150 years after Return of the Jedi, though it was also shoehorned into the new defunct EU continuum to take place much closer to the events of that film given the young age of Wicket, who befriends Cindel with all of the same exuberance as he did Leia. The little fella has a thing for human girls, I guess.

In all honesty this is just an excuse for me to talk about the Gorax. Because the Gorax scared the everloving crap out of me as a kid. And even as an adult it is remarkably effective (in the wide shots), though that could just be a muscle memory of terror leftover from childhood. It is a combination of its menacingly inhuman face and its body language as it tromps across the screen looking to squish furry little Ewoks.

The Gorax is one of those memories of Star Wars that for a long time was little more than a hazy recollection, a feeling in the gut as some half-remembered glimpse of a giant hairy arm reaching up from the depths of a chasm flits across my mind’s eye. For so long I couldn’t quite remember if it was real, or something I had dreamt up and folded into the saga with the aid of too much sugar and an overactive imagination.

But it does exist, and is a main reason it is fun to revisit the film from time to time, even though I would never count it as essential. Unless I was looking to scare the bejesus out of some kids who just wanted to watched some Ewoks.