Nectar of the Godzillas: GODZILLA (1954) 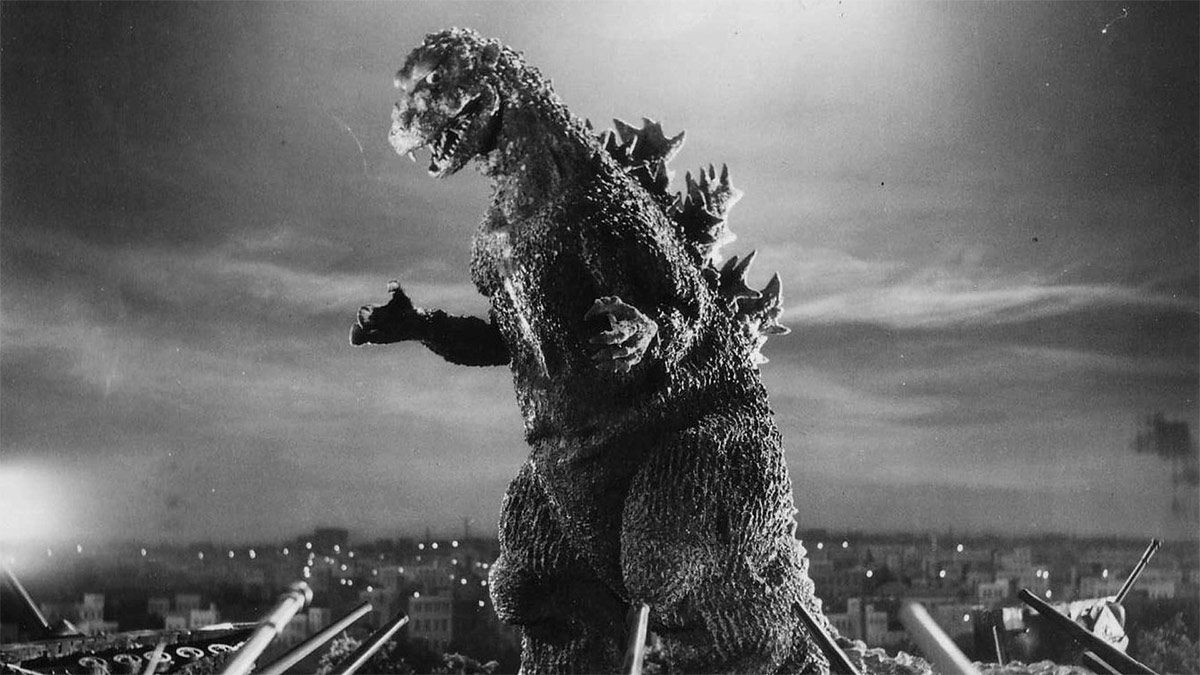 Nectar of the Godzillas is an ongoing series taking a critical look at the iconic monster and his films.

Godzilla: a name so iconic that even those have never seen one of the films are familiar with it. For many, their first thought is of a man in a suit destroying Tokyo and fighting other monsters. For Director Ishiro Honda, Godzilla was the nightmare of a nation: the consequences of what man had done to his fellow man and a harbinger of what the power of nuclear weapons would do to mankind.

Godzilla opens with a group of sailors on the Eiko-maru, a Japanese freighter off the coast of Edo Island enjoying their time at sea. Something which quickly changes as they are witness to a large flash in the ocean. Director Honda doesn’t shy away from their subsequent deaths. He wants the audience to understand the horrific loss of life. It’s no coincidence that this scene was inspired by the Lucky Dragon incident, where a Japanese fishing boat came too close to a nuclear test site and the crew was contaminated with radiation. Too often, audience members dismiss the Godzilla film franchise as nothing more than men in rubber suits, but from this opening scene, Ishiro Honda gives us a film that cannot simply be dismissed as a B-movie.

Honda wasn’t trying to make a fun monster movie, he was trying to tell a story about the horrors the Japanese went through during the bombings of Hiroshima and Nagasaki. Not only in the macro sense of what the nuclear attacks meant but the reactions of the people in the middle of all of it. From the politicians who’d rather appease Japan’s international allies than help its own citizens, to Dr. Yamane (Takashi Shimura), a paleontologist who wants to capture and study Godzilla, which makes sense from a scientific perspective until you think of the loss of life the monster has caused. It’s not until Godzilla’s major devastating attack on Tokyo where thousands die that Dr. Yamane understands that it’s about the greater good instead of his selfish needs.

But it’s the three lead characters that give us our human perspective in the middle of all this chaos: Hideto Ogata (Akira Takarada), a sea captain for the Nankal Salvage Company, and Emiko Yamane (Momoko Kochi), who unfortunately isn’t much more than a love interest, are part of a love triangle involving Daisuke Serizawa (Akihiki Hirata), a reclusive scientist who is working on a secret that he isn’t ready to show to the world. What could have easily been one of the many melodramas found in old monster movies is what drives the film’s humanity. Honda doesn’t seem interested in the love story itself (after all, the film only has a couple of throw away lines about Ogata and Emiko’s love) but rather uses the character’s established relationships to show us how they’re dealing with a world that can end tomorrow.

Emiko, a woman willing to do anything for the people she cares about, puts the needs of the men around her in front of her own. Only later do we learn that it’s not just the men in her life: she’s willing to lose everything to protect her people. Ogat is a man who wants to help but has no way to do so; a simple man in the middle of an extraordinary situation. No matter how much he wishes he could save everyone and stop the monster he knows he’s as helpless as everyone else. Then there is Serizawa who can save everyone from all this destruction but is afraid of the ramifications.

Serizawa isn’t our lead, and it’s only about half way into the film that we actually hear him speak, but he’s the film’s most complex character. He’s a man who has found the way to stop Godzilla, but at a cost he’s not willing to pay. Serizawa invents the Oxygen Destroyer, a weapon that kills by disintegrating all the oxygen around it. He instantly understands the ramifications of the governments of the world learning of such a weapon, which is why he decides to hide it until he discovers a use for it that wouldn’t lead to humanity’s demise. He’s a man who’d rather destroy his work and take his life than see people use his creation for evil.

Unfortunately for Serizawa, Godzilla forces his hand. He knows that only he can stop the monster from taking more innocent lives.  Thanks to some convincing from Ogata and Emiko, he decides to use the oxygen destroyer to kill the monster, but with one catch: it’s the only time it will ever be used and he must be the one to unleash it. Serizawa knows that the reveal means the world will want to know how he invented such a weapon and, while he may destroy the research, he is still its creator. Unless he sacrifices himself there’s a chance that the oxygen destroyer could fall in the wrong hands. Serizawa feels like Honda’s platonic ideal of humanity: capable of creating the ultimate destroyer, but recognizing the inherent dangers; a man willing to die to save humanity, not just from a monster, but from themselves.

1954, nine years removed from the attacks of Hiroshima and Nagasaki, Godzilla isn’t simply about a monster that comes to town to destroy it. It is about our fear of such a destructive force coming unexpectedly and killing thousands of innocent people, and the fact that humanity is responsible. Godzilla doesn’t come to the surface because he wants to, it’s the use of hydrogen bombs that awaken him. It’s man’s need to create larger, more dangerous weapons that awakens an unstoppable force. The monster is our fault. Nuclear weapons are our fault. We created something that’s sole purpose is our destruction.

Godzilla is about the horrors we have committed and where we are headed as a society, but it’s also about how the best of us—the best version of us—can still stop it all from happening. A film that tells us to do better, be better. It’s a message that continues to be important now. Hopefully we’ll listen.

Things We're Digging This Week - Week of 5/8/17 Previous
Review - KING ARTHUR: LEGEND OF THE SWORD Next