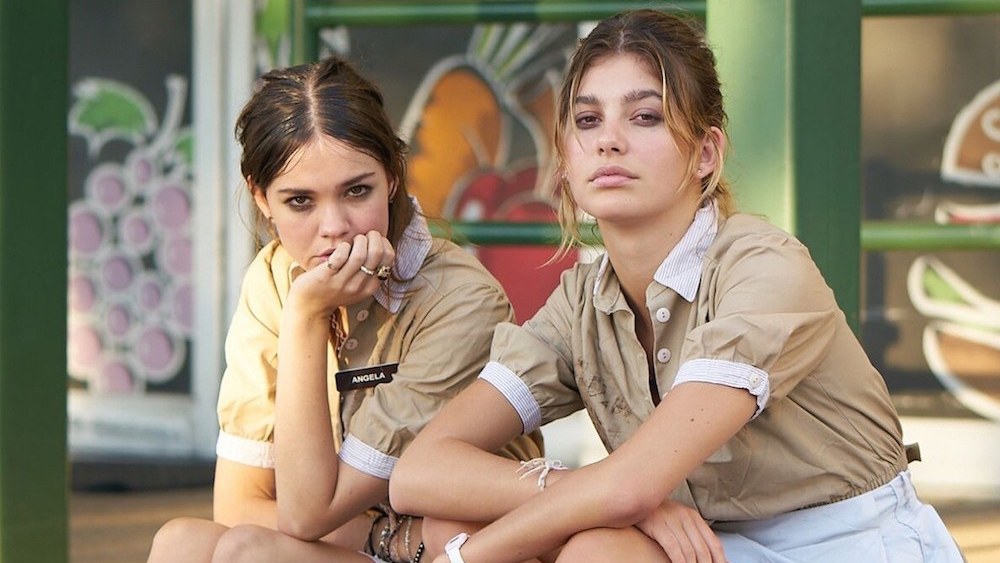 The past few years have been rife with movies all about being young and unburdened by the harsh realities of adulthood. It makes sense in a world where nostalgia, be it reboots, remakes, or references, has become the #1 source of entertainment in pop culture. The world is a scary place, and the stuff we loved as a kid is safe.

Which is kind of what makes Never Goin’ Back so much fun and unique. Rather than be about the youth of today or the past or saying something about being immature, Never Goin’ Back focuses on, and succeeds at, capturing the feeling of being young and dumb. There’s no real way of describing Never Goin’ Back without focusing on the fact that this is a movie about stupid people doing stupid things for the absolute stupidest reasons.

The film is about Angela and Jessie (Maia Mitchell and Camila Morrone, respectively), two underage high school dropouts who have made the decision to take a vacation to see the beach for the first time—spending their rent money to do so. They get arrested for possession after someone breaks into their home, and their shifts at their restaurant job, which they need to pay their part of the rent, are in jeopardy.

They live with Angela’s brother and two other men who are also behind on their rent due to a drug deal “gone wrong”—they got held up trying to buy drugs because they fell for a scam that was inherently obvious from the start. All five of them are more interested in doing drugs, drinking, and making the absolute worst decisions than doing anything productive. Hard up for money, the girls and the three wannabe drug dealers decide that their best bet is to rob the sandwich shop that their sixth roommate works at—a conclusion the two groups come to and attempt to execute separately.

Which all culminates in a spectacular climax that is the comedic equivalent to one of the action setpieces in a Mission: Impossible film. We’re talking something that exponentially ratchets up the insanity in ways that just compound in hilarity. I won’t spoil it, but it involves a storage closet, mustard, a bucket, pantyhose and an old man sexting. It’s an incredible sequence that needs to be seen to be believed.

The rest of the film, unfortunately, is a bit more inconsistent. The comedy comes in fits and spurts, particularly when the focus switches from Angela and Jessie over to their male counterparts. Mitchell and Morrone carry the film with chemistry that is off the charts and a knack for making the (intentionally) sophomoric comedic dialogue sing. The three “drug dealers” wear out their welcome almost by the time their first scene is over. The side characters mostly pop up in order to get the girls into poor decisions and hijinks, of which some are great (there’s a great bit involving the never-ending search for a washing machine) but many fall fall flat. Even SNL’s Kyle Mooney, the film’s most recognizable actor, is a bit grating as the horny, pervy sandwich shop employee who desperately wants to sleep with the two girls.

I mentioned before that Never Goin’ Back is a film about stupid people doing stupid things for stupid reasons, and I mean that in the best possible way. Writer/director Augustine Frizzell perfectly captures the idiocy of that age of our lives. Angela and Jessie aren’t even 18 years old and yet they both have delusions that they are living their best lives, despite their dead end waitressing jobs and trashy rental house they share with three other people. They believe that they’re invincible, showing up high and drunk to work constantly and spend most of their time at work scheming on ways to get out of work.

Frizzell lenses such an uncompromising, nonjudgemental look at that life of working a minimum wage job in your teens and using that little amount of cash to go on adventures and drink and do drugs. It’s not trying to make any grand social statement, it’s presenting Angela and Jessie’s life as it is: full of partying, bad decisions, and fun. Sure, it sucks living in somewhat poor conditions and working a crappy job, but there’s a carefreeness that comes with that lifestyle at that age. There’s no worries about kids, lower back pain, mortgages, health problems, none of that jazz. It’s refreshing to see a film that gives us a vision of teenage foolish bravado where the present is what matters and there is a blissful ignorance of the future.

A24 has two films out now about being young in the modern world. Eighth Grade is an excellent look at the modern day pratfalls of being a preteen and is equal parts hilarious and insightful. In contrast, Never Goin’ Back is a straightforward comedy that is more intent on making you laugh than making you think too hard about the nature of adolescence. Which might sound like a slight against the film, but rather an apt throughline for the film to take.

Lots and lots of Teenagers, most even, are dumb and aren’t always exactly inwardly thinking about themselves or making grand statements with their thoughts, words, or actions. Never Goin’ Back is a wonderful encapsulation of that ethos. And is damn funny at the same time.