Off the Beaten Path: DEATH TO SMOOCHY 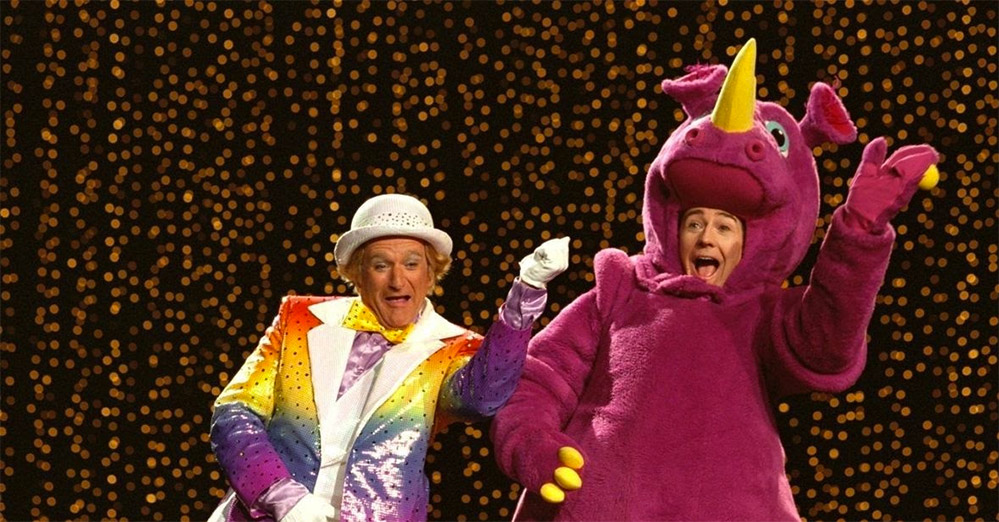 One of the defining concepts in the last few years has been the so called “cancel culture”: when a public figure does something so reprehensible that their presence and appreciation need to be avoided at all costs. Interestingly enough, the implications of “cancel culture” were explored back in 2002 with the Danny DeVito-directed dark comedy Death to Smoochy.

Robin Williams plays Rainbow Randolph: a kids show host who is caught receiving bribes to get children on his show. His career and reputation are damaged as a result, forcing the producers to hire clean cut Sheldon Mopes AKA Smoochy the Rhino (Edward Norton) to replace him.

Let’s get this out of the way, the plotting machinations in Death to Smoochy are pretty absurd, something that works both to its favor and to its detriment. A lot of the story relies on crazy contrivances that don’t necessarily add up to scrutiny. At the same time, this absurdity highlights the fact that things in our own world don’t always make as much sense as we’d like them too. For instance, logic dictates that Randolph should have gone straight to prison for his crimes. But in a reality where scumbags like the current President of the United States roam around free, Randolph asking for pity in New York City’s streets feels shockingly prescient.

The great Robin Williams was mostly known for his most likable roles, but he also had a talent to subvert that public persona and play petty sociopaths drowned by obsession. Randolph is an awful person, but Williams plays him in just the right frequency so he never becomes a grating presence.

Similar to Williams, the casting of Edward Norton as Mopes is clever in that it went against the type of roles he was working with at the time. Norton stood out for playing intelligent, but angry men who squandered their potential in socially destructive endeavors. In contrast, Mopes is a genuinely nice guy who wants to use whatever influence he has to improve the lives of others. This nobility puts Mopes in the sight of the worst people in New York City, who will test his patience and tempt him to fall into the moral decay that plagues show business. Norton gives a career-best performance, as he brilliantly displays Mopes’ struggle to maintain positive energy despite the cynicism that surrounds him. A struggle that takes him to dark places of self-discovery.

It’s also worth noting Catherine Keener as Nora Wells: a television executive who finds herself in a funny and strange sexual dynamic with Mopes. The chemistry between Norton and Keener has a playful edge that leads both of their characters to grow emotionally, so you end up rooting for them.

Danny DeVito does a good job as a manager with disturbing secrets. But most notably, I was quite impressed with his skills behind the camera. DeVito took a premise as silly as “Barney the Dinosaur is targeted by hitmen and harassers” and filled it with characterization layers, a well modulated tone and irreverent social commentary.

What I find most fascinating about Death to Smoochy is the ways it can be read. First, it’s a film about getting your act together with positive actions. Mopes’ philanthropic instincts motivate the cynical people around him to become the best possible version of themselves, including Randolph. Mopes realized that Randolph was drowning himself in loneliness and self-hatred. This newfound empathy makes Randolph question the destructive way he has been living his life after becoming a pariah, so he tries to find redemption by becoming an ally for Mopes. Similarly, Nora starts the film as skeptical on Mopes’ idealistic worldview, but her increasing intimacy with him makes her recover the excitement about life she once lost.

Mopes goes through the inverse path as Randolph and Nora. There’s a point in the climax where an assassination attempt on his life motivates him to become as toxic as the people who want to take him down. And it is Nora, who changed for the better thanks to Mopes, that reminds him to stay true to himself.

The other way of interpreting the film is as an indictment to how easily society shrugs off the crimes of toxic people. Not only does Randolph take dirty money, he tries to get Mopes fired from his show, tricked him into performing for white supremacists, and assaulted a wildlife activist in the middle of the street. His position as a (former) white male television star shields him from the most serious consequences and allows him to eventually go back to his former glory. Sure, he helps to save Mopes from the mafia, but should that give him a free pass?

In a way, Death to Smoochy was ahead of its time. It doesn’t necessarily provide straightforward answers to how to deal with powerful people who destroy others’ lives. However, it’s a rather accurate, if exaggerated, portrayal of how our media-saturated society reacts to ever-changing narratives about celebrities. Not to mention the incredibly weird fact that entertainers hold that much influence in the zeitgeist because we were okay with it.