Off the Beaten Path: LOOK WHO’S BACK

“People were not fooled by propaganda. They elected a leader who openly disclosed his plans in great clarity.” 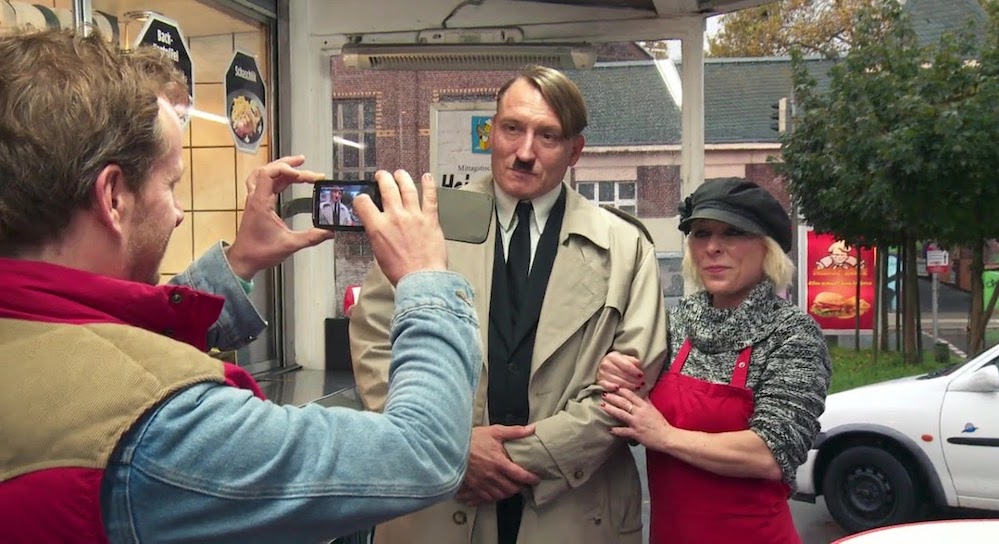 Over 70 years away from Nazi occupied Germany, it’s easy to lose sight of the causes that lead to the problem. We often think of it as an event so catastrophic that it would be unlikely for it to happen again. Which is why the satire Look Who’s Back uses the lens of alternative history to present this mindset in a digestible manner.

Adolf Hitler suddenly appears in 2014 Germany, and his return becomes a nationwide sensation. While the dictator is baffled by some of the changes Germany went through, he doesn’t take long to see opportunities to reboot his ideology.

It is common for pop culture media to portray Hitler as a one-dimensional cartoon villain who’s easy to ridicule and dismiss, and Look Who’s Back has a brilliant subversion of this tradition. The film is full of funny beats, but these are designed to make the audience terrified at the methods white supremacists use to normalize their presence. A good part of this tonal balance is Oliver Masucci’s performance as the dictator, which regularly goes back and forth between hilarious and menacing in the same scene. Director and writer David Wnendt also finds clever ways to use Masucci’s towering height as a symbol for Hitler’s indelible mark in history, as well as a factor that makes him more intimidating when he’s standing right next to other people.

As Hitler gets used to the sensibilities of modern times and interacts with the common folk, he realizes that some of the circumstances that allowed his rise to power back in the 1930s remain the modern world. Hitler knows his way around people, and it doesn’t take long before he uses anti-immigrant sentiments, social media and racism played for laughs on television as his new platforms. This Hitler isn’t a loud neurotic imposing his will on everyone. He’s an insidious planner who knows how to subtly manipulate people’s worst impulses and weaknesses so they do exactly what he wants. People dismissing Hitler as just an impressionist is a striking representation for how society thinks it’s impossible for tyrants to rise to power in countries that are supposed to be above that kind of phenomenon.

The core of the film is on down-on-his-luck journalist Fabian Sawatzki, who sees in Hitler an opportunity to make a potentially compelling documentary and a name for himself in the process. Like everyone else, Sawatzki doesn’t take Hitler too seriously and treats him like a potential cash cow. Much to his misfortune, it is Hitler who’s utilizing Sawatzki as a tool to dignify his voice in the 21st century. Sawatzki’s perspective is important to fully grasp the gravity of the situation. Even though he’s not a self-identified white supremacist, he ultimately serves a white supremacist system by spreading bigotry for the sake of a social experiment and an ego boost. By the time Sawatzki realizes his own complicity, it’s too little too late, since Hitler’s newfound influence has extended to a virtually unstoppable degree. This leaves Sawatzki as a victim of Hitler’s manipulations, but at the same time, as a spineless collaborator who took his own goodness for granted.

What impressed me the most about Look Who’s Back is that it came out in 2015, right before authoritarianism made a comeback in several countries around the globe. Especially because it’s shockingly prescient in how it portrays the zeitgeist in the last four years. There’s a mainstream media that doesn’t mind parroting fascists for the sake of clicks and ratings, a culture that boosts these awful people by thinking they’re a joke that won’t go too far, nationalistic xenophobia, and a bureaucratic system that doesn’t offer much resistance towards fascists slowly making their way to positions of power.

Hitler’s presence in the film is a brutally stark reminder that white supremacy is constantly waiting to burst whenever it gets the chance. That it’s difficult to assimilate the dangers of its existence because it’s perpetrated by “normal” people rationalizing their racism with trauma, profit or political concerns in bad faith, not just foot soldiers displaying Nazi memorabilia.

Thanks to factors like journalists’ insistence on “being fair to all sides” or the disproportionate influence of people who prioritize their bigotry over their own interests, Look Who’s Back remains a relevant and insightful screed against the damage caused by white arrogance.