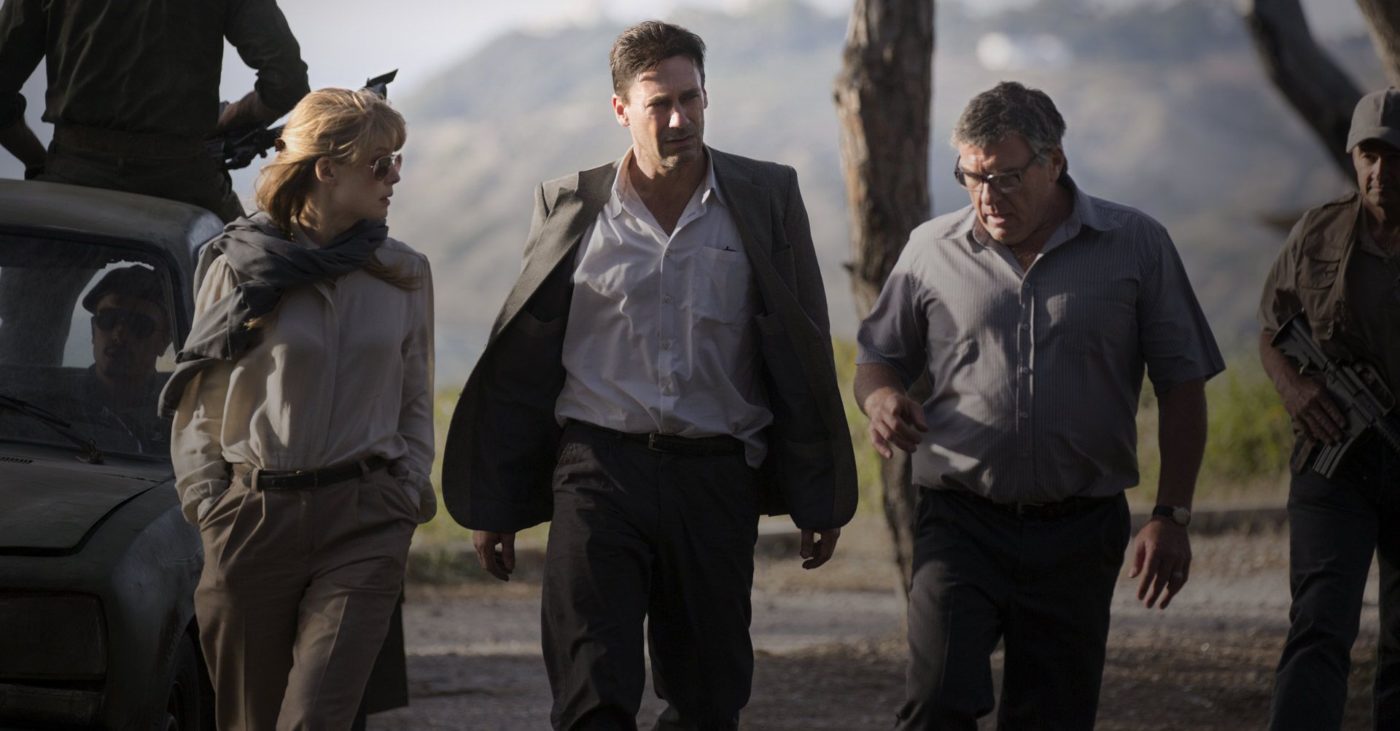 Instead of jumping right into recounting plot details and writing a few puff-piece words about the careers of actor Jon Hamm, writer Tony Gilroy, or director Brad Anderson, I’ll instead lead off by pointing to Beirut’s trailer, which has incited a lot of (rightful) anger about its portrayal of the Lebanese Civil War, the conflict used as the backdrop of the film.

Getting right into it.  This trailer looks… not great, right? Brown people holding poor, innocent white people hostage in a foreign country with the film’s sole focus appearing to be how the Lebanese Civil War affects White Americans is not a great look.  It’s the kind of film that would have been a dime-a-dozen in, say, 1991, which happens to be when Gilroy, now one of Hollywood’s top scribes, wrote the original draft of the screenplay.  It’s a good indication of why the film feels a bit dated at a first glance.

In a New York Times article discussing the controversial trailer, Sopan Deb worries that the film “might reduce Lebanon’s complicated, sectarian civil war to a flashy backdrop for Mr. Hamm.”  The good news is that he’s only half right—while the film does essentially use the city and Civil War a central backdrop for Jon Hamm’s widowed, alcoholic Mason Skiles, Gilroy and Anderson show an incredible amount of deftness, even-handedness, and understanding of the issues at play in Lebanon at the time rather than just making this another in a long line of generic Middle Eastern terrorist thrillers.  It doesn’t fall prey to a reductionist portrayal of the Middle East in general and of the Lebanese Civil War more specifically. Rather, Beirut’s flaws reside in its use of tired tropes, a lazy plot and central character arc, and a failure to capitalize on the politics that the film sets up but does nothing with.

Hamm’s Skiles is a former US diplomat to Lebanon who retires after his wife and his adoptive son Karim are abducted by Karim’s brother, a PLO terrorist responsible in part for the Black September Munich massacre.  After working for a decade mediating labor disputes back in the States, he is brought back into the fold when his former best friend, Cal, is kidnapped by a new terrorist cell that has taken hold in the city of Beirut, the capital and one of the hardest hit cities during the Lebanese Civil War.  The kidnapper turns out to be Karim, and he asks for Skiles specifically to negotiate the deal and will only return Cal in exchange for Raffik, Karim’s brother and the man responsible for Skiles’s wife’s death.

Which is where the film’s stronger, and more nuanced elements lie—the Karim from the trailer appears to be a bloodthirsty terrorist who want to get his brother back to do more terrorist things.  The film’s portrayal is far more subtle and sympathetic, showing that Karim is a man broken by never-ending violence that is partially the fault of his brother. Karim is a Palestinian refugee whose traumatic past haunts his every move, and his brother represents both the ability to fight back, but also the loss of the life he could have had as the son of a US diplomat.  Idir Chende, the French actor portraying Karim, does an astonishing job of giving us all of these internal character struggles without voice over, monologuing or even saying a word. His struggle is all internal, rarely showing his hand except in brief solitary moments where he is allowed to show emotions.

The film also not only pays lip service to the War’s complexities, but shows us how the Lebanese people are victims of the Israeli-Palestinian conflict, with both sides using Beirut as a battleground to wage a proxy war.  Beirut makes sure it is known that the Americans have blood on their hands as well, being more concerned about saving one intelligence agent who might compromise their operations then they are Israel, Syria, or other external parties from bombing the homes of innocent men, women, and children.  The majority of these factions all view Lebanon, and Beirut by extension, as a warzone to “win,” not a place where people live. It shows us bombings and the immediate confused reactions by bystanders as to who is really behind them. Palestine? Israel? Syria? No one can be quite sure.

But the film never reconciles the vibrant and difficult setting with its staid, flat, and frankly boring central storyline about Skiles fighting his past and his addictions.  You can see every aspect of Skiles’ story coming from a mile away, from the fridging of his wife to the struggling man and his alcoholism to his attempt at a “refusal of the call” to his eventual recovery to become a great diplomat and negotiator again.  You can tell which US Embassy employees are going to turn into mustache twirling villains from the second you meet them, painting them as “bad apples” and seemingly letting America off the hook for their own involvement in the war. It’s textbook, predictable stuff that is even more disappointing given how well executed the elements on the periphery are.

In all, Beirut is a thoroughly “okay” potboiler that skillfully executes the film’s setting, but sadly the film lives and dies on the aspects in the margins.  Hamm is flat and just looks tired of doing the same not-Don Draper performance for the nth time, and the film only comes alive when the focus expands beyond his character.  It’s when the film focuses on Karim, or the surrounding war, or the equally complex Israeli-Palestinian conflict where the intensity ratchets up and there’s stakes that feel real and personal.  Which begs the question: “who is this film for?” It’s too sympathetic in its portrayal of the foreign entities at hand to play to the “rah-rah” American dad-movie crowd, but it’s also too white-bread and safe to work as a proper indictment of colonization and rampant interventionism.  It’s thoroughly middle of the road, with scenes of excellence wrapped like an elegant bow around a perfectly wrapped gift that turns out to be white tube socks.

The Trailer For Big-Budget Big Shark Movie THE MEG Is... Previous
There Was An Idea... Captain America: Staying a Good... Next