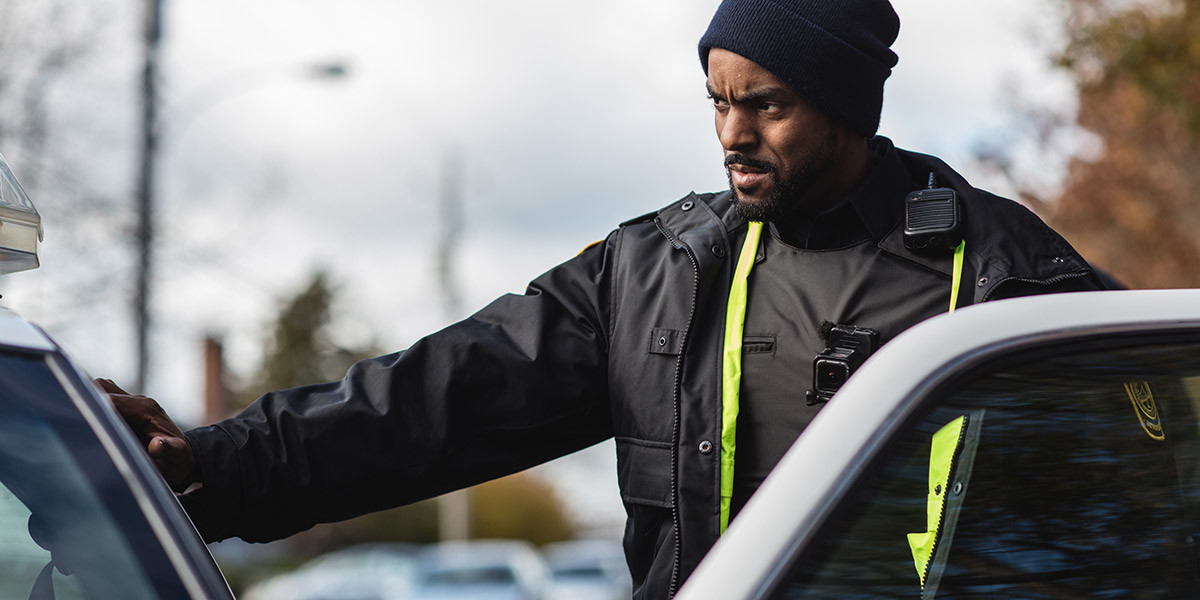 Written and directed by Cory Bowles (of Trailer Park Boys’ Cory and Trevor fame), Black Cop is one of the most incendiary social satire films in years.  It’s a film that makes no bones about its anger, fueled by the outrage burning deep inside the heart of Black men and women every time another person of color is gunned down by police in the streets.  Bowles’ film is brimming with energy from start to finish, a remarkably innovative and wholly unique film that uses the righteous indignation of the Black Lives Matter movement to expose the truth about oppression.  Black Cop is designed to aggrieve the #AllLivesMatter crowd.

Star Trek: Discovery’s Ronnie Rowe, Jr. plays the titular Black Cop, a social pariah in his community because of his race and job.  After a series of unseen (but reported on the radio) incidents cause protests in the streets, our protagonist finds himself struggling to reconcile his Blackness and his choice of career.  When he’s stopped, harassed, and threatened while jogging late one night by a white badge-wearer, he finally decides enough is enough and takes it upon himself to commit career suicide by attacking not only one of his fellow officers harassing Black teens, but by treating the white people of the community with the same disregard, violence, and abuse that white cops treat people of color with every day.

It’s a pretty straightforward premise: Man is ambivalent about thing A, thing A happens to him, Man becomes a crusader against thing A.  It’s character development 101. While the technical plotting of the film, at least at first, is simple and fairly uncomplicated, Bowles brings it all to vivid life through sequences of slam poetry-esque spoken word monologues, dashcam footage, and a structure that is less formal than a traditional narrative.

Bowles plays with narrative cinema like he’s Spike Lee or Quentin Tarantino, using chapter headings and cutting his sequences so that they are interspersed by beautifully shot sidebars of Rowe lit by red and blue lights, performing a minstrel show in black and white, and shadowboxing.  None of the spoken word sections sacrifice visuals for dialogue, using cinematography, lighting, and an incredible performance by Rowe as the backdrop for the poetic voiceover to the audience. This is all while using the meter of slam poetry to invite us into his world.

Every aspect of Black Cop is so incredibly well thought out and fleshed out.  Zeal & Ardor, a band whose sound was literally developed out of right wing racism, has music littered throughout the film, their slave-chants-meet-black-metal style keying into how out of place, yet at the same time at home, Black Cop seems to be in his predominantly white profession.  Utilizing the shucking and jiving of minstrel shows and the cadence of non-protesting slam poetry is an example of the evolution of what white people feel is an “appropriate” level of Blackness. White America can’t handle the beats of hip hop or the protest poetry we hear in the film’s bookends, listening instead to man tell us in verse why he wants to be a cop.  Black Cop is a man trying to work within a racist system, exemplified simply and sharply by a fellow cop busting out the “I have a black friend” card early in the film.  And every instance where the protagonist uses violence against a white civilian, he does so after they’ve done one of the multitude of seemingly innocuous actions that have resulted in the deaths of Black men and women.

Bowles doesn’t shy away from how uneasy and difficult this subject is.  There’s no cutaway or jovial laughs to be found when we watch the eponymous character throw a pregnant woman to the ground or when he pulls a gun on an innocent college student.  But that’s the point, isn’t it? These are things that happen to Black and Brown people every day and no one bats an eye, yet the second it pretend-happens to white people in a film it become nauseating.  Bowles is confronting our biases and challenging the audience’s perception of police brutality. This is an aggressively “in your face” film, with many of the interactions with civilians filmed on dashcams and body cameras.  It’s a bold and effective technique, as it makes the violence hyper-realistic and immediate in our minds.

This might be Bowles first feature film as a director,1 but he’s already got an incredible grasp on his craft.  There is an audacity and fearlessness in his writing and direction here that is frankly remarkable.  To take on a topic this politically charged and to do so using a unique, avant-garde style that melds a handful of influences together is risking a major misstep if the tone and stylings aren’t executed perfectly or if the raw energy of the film wanes for even a moment.  What Bowles has accomplished with Black Cop is truly a towering achievement of ingenuity and bravado.