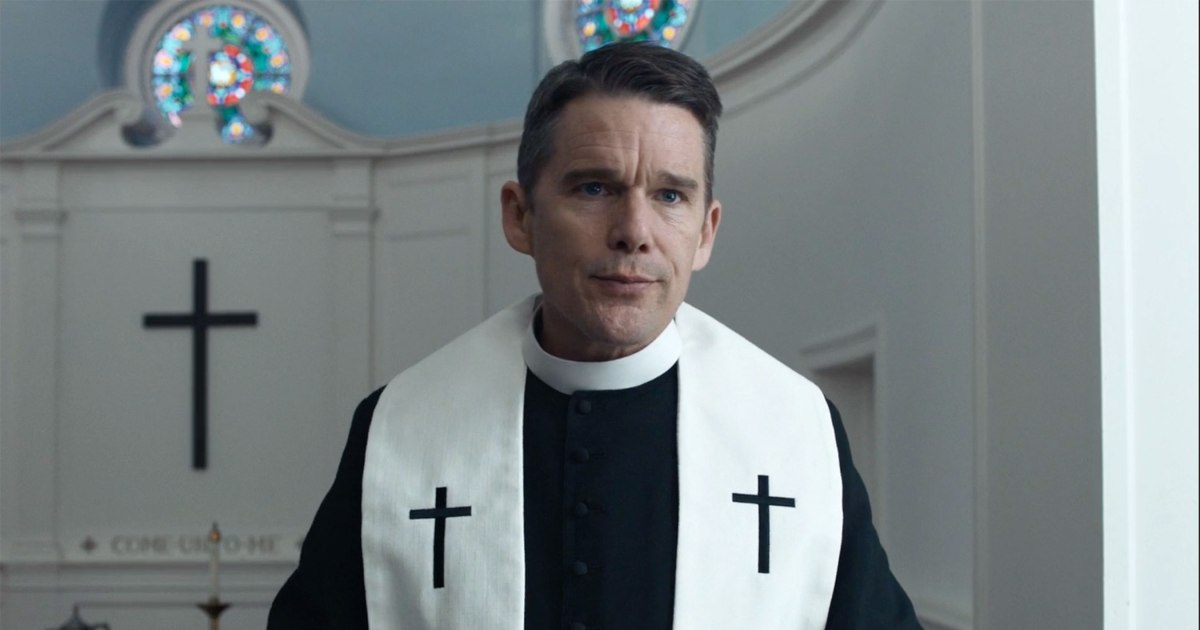 “The Lord God took the man and put him in the Garden of Eden to work it and take care of it.”
– Genesis 2:15

It has been a long, long time since Paul Schrader has made a film truly worthwhile.  Just years removed from the slum of directing a few of those direct-to-video films Nicolas Cage was using to pay off his insurmountable T-Rex skull debt, Schrader has returned with what might be his finest directorial effort ever and his best screenplay since The Last Temptation of Christ.  First Reformed is a miracle film, one that is of a piece with Schrader’s finest collaborations with Martin Scorsese, as much a meditation on faith as Last Temptation but with the fury of Taxi Driver or Rolling Thunder.  It’s a film that is full of righteous anger, rage, and frustration with the modern world and one that calls into question how one can claim to love God whilst destroying his creation.

Schrader isn’t subtle about this.  This film is not an understated examination or a thought experiment — it is a barefaced screed against the greed, disinterest, and blind leadership that has pushed the Earth to its breaking point.  This is very much a film about Climate Change and an indictment of mainstream American Christianity’s role in allowing it to happen. Much like, well, every other film in his career, Schrader confronts these institutional failures through a broken, crestfallen, and cynical male avatar for the filmmaker’s own demons.

Rev. Toller is the alcoholic, divorced pastor of the First Reformed Church, a small, historic church outside Albany, New York.  The local megachurch, with its wealthy energy company CEO, are funding the 250 year old First Reformed Church’s reconsecration ceremony.  The church is modest, with about a dozen regular parishioners and an organ that hasn’t worked in years. Its primary purpose is as a tourist trap.  No one takes Toller and his church seriously as a place of worship, considering it “the gift shop.” Yet Rev. Toller is asked by one of his few regular attendants, Mary (Amanda Seyfried), to counsel her husband Michael, who has become depressed and has found himself lost in the world of extreme environmental activism.  As Toller and Michael discuss fatherhood (Mary is pregnant and Toller’s son died in the Iraq War), Toller finds himself questioning the church and Christianity’s role in the irreparable damage causing Michael’s depression.

The film entirely revolves around Toller, brought to life by Ethan Hawke’s fully invested performance and Schrader’s incredible use of close ups and inventive use of the 4:3 Academy aspect ratio.  Schrader has always been a bit of a manic filmmaker, but here his camera often is still, narrowly framing and blocking rooms, objects, buildings, and faces so that there is only empty space when the scene specifically calls for it. Hawke is perfectly suited as Schrader’s muse, convincingly espousing dialogue with the proper hostility and passion.  The film uses Rev. Toller’s longhand journal, read to us via voiceover, to give insight into his mind — a tactic that, with a lesser actor or filmmaker, could be tiresome, but here it works incredibly. It tracks with Schrader’s lack of thematic subtlety on display in the rest of the film, allowing the audience direct insight into the mind of the film’s protagonist.

Toller’s journey mirrors that of Travis Bickle in Taxi Driver.  He sees the nasty underbelly of the beast and takes it upon himself to do what he can to slay it.  The key difference here is that Toller’s cause is not steeped in racism, classism, sexism, and the other incorrigible aspects of Bickle’s twisted psychology.  Toller is a man of God who has struggled to maintain his faith, losing touch with God despite preaching his word every Sunday. He has lost his ability to pray, fearing that his words fall upon deaf ears.  It isn’t until he takes up Michael’s cause that his faith is renewed and he finds purpose both in himself and in his faith. Toller is a flawed man, a fact the film doesn’t shy away from, but one whose faith is genuine.  “It wasn’t the church that called me” he says after confronted with an extreme right-wing christian teen who wants the church to take up arms against Muslims and other modern political boogeymen.

Which gets to the heart of why mainstream Christianity in the United States is so broken.  The Church has become more important and monolithic than the Word of Christ. Sunday mornings have become the most segregated times in our lives.  Megachurches that preach snake-oil “Prosperity Gospel” messages and are run by millionaire pastors hold more sway than Christ’s message.

It has been hard holding firm in my faith the past few years, watching as charlatans and frauds have been exalted by those who claim to worship the same God as I.  Fellow believers naysay the consensus scientific fact that the Earth is warming because mankind has abused it. They deride organizations that work to prevent pollution and support deforestation and rampant oil drilling.  Over fifty times is the God’s divine presence in nature mentioned in Psalms, yet Americans by and large care not for the destruction of our environment, ecosystems, and atmosphere. Schrader’s bitterness and indignation is rooted in the realization that this is a political movement where the Church could lead and fight the good fight, but has instead acquiesced or become complicit.

Psalm 19:1 says “The heavens declare the glory of God; the skies proclaim the work of his hands.”  Combine this declaration that God is one with his creation with Revelation 11:18, and the crux of Schrader’s film becomes clear —  “The time has come for judging the dead, and for rewarding your servants the prophets and your people who revere your name, both great and small— and for destroying those who destroy the earth.”

“Can God Forgive Us?”, First Reformed then asks.  Can God forgive man for sinning against him and his creation in such a callous way?  Can he forgive those who claim to believe and know the Grace of God yet stand idly by while politicians they voted for allow this to happen with a grin?

No one can truly know the mind of God, but for most of the film Schrader’s answer to these questions is a clear “no.”  Every one of Toller’s protests and concerns are met with disdain. Men criticize his failures as a pastor and father.  Friends literally turn their back to him.  Toller’s only apparent solace comes in the form of violent, cleansing penance.

And yet the film ends with hope.  Where Taxi Driver’s final scene is a moment of ironic happiness, First Reformed ends on a note of straight-faced optimism.  The world might be dying, and God may never forgive us, but, as Rev. Toller says early in the film “wisdom is holding two conflicting ideas in your head at the same time.”  We’re faced with a global crisis, one where factions frivolously pretend like nothing is wrong in order to financially gain and preserve power. To paraphrase Rev. Toller, the problems of the world might be new, but the darkness is not.  Yet in the face of that darkness, Schrader insists, there will always and must always be hope.

“He will wipe every tear from their eyes. There will be no more death or mourning or crying or pain, for the old order of things has passed away.”
– Revelation 21:4