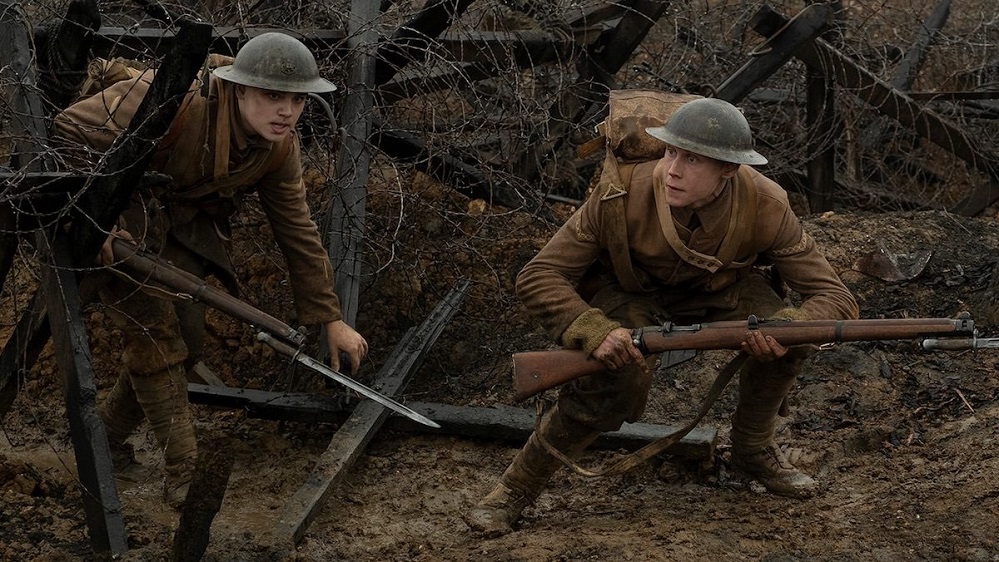 All the talk of Sam Mendes’s 1917 has revolved around the central premise: a WWI film that is, entirely from start to finish, a single1 shot. Its very existence begs the audience to be impressed with its ingenuity, rather than its emotional and artistic weight. Mendes has done this before, composing the opening to his second Bond effort in a similar fashion, but that was a mere few minutes, not a feature length film. It’s worth wondering if he could maintain the type of energy necessary to carry this out for a whole hundred-or-so minutes. Fortunately, it all mostly works and Mendes has enough craft and verve to make 1917 a satisfying addition to the canon of cinematic depictions of warfare.

The film opens on two soldiers, Schofield (George McKay) and Blake (Dean-Charles Chapman), waking up to find they have a new mission: deliver a message that will save 1,600 lives, including Blake’s brother. British intelligence has discovered that a battalion is being lured into a trap, and communications failures have forced them to rely on the two men to carry their message across the battlefield and into enemy territory. This includes traversing carnage strewed, war-torn fields, abandoned enemy bunkers, and towns where the Great War has wreaked enormous havoc. 1917 follows the two men via the aforementioned long-take, putting the audience directly into the battleground and the duo’s perilous charge.

Mendes’s background in theater makes the gimmick work more often than not. He composes scenes that connect the action-oriented beats that rely on his background in the medium, allowing him to achieve reprieves without traditional cutting. Scenes of soldiers sitting in a convoy truck having a conversation or a scene where Schofield hides in a basement with a woman and her baby help alleviate tension and provide breaks in the film’s constant motion. It’s not entirely successful, as too much of the film’s first half feels monotonous and stodgy, with uninspired dialogue.

Those scenes are worth plodding through because of how strong the film’s set pieces are. There’s the almost Indiana Jones-y race through a collapsing German bunker, where Schofield is blinded by dust and has to rely on Blake to guide him. The film’s climactic sprint over the trench of no man’s land is a particular showstopper, using what would be the focus of 99% of traditional war films and using it as a backdrop for our character’s desperate final trek through hell. For a theater-turned-film director, Mendes has an eye for visual action and a gift for pacing, which allows him to pull off these scenes even without the use of obvious editing tricks. Every sequence has a clear geography that makes it easy to track the film’s goings on, even as the camera remains focused in on the characters. And, needless to say, Roger Deakins’ wonderful, dynamic cinematography is the glue that holds it all together.

McKay and Chapman are compelling in the lead roles, with McKay in particular standing out for his exhausted, yet steely portrayal of Schofield, though Chapman does bring some of that wide-eyed Tommen energy to his performance. The supporting cast features brief, but committed performances from high-profile British actors like Benedict Cumberbatch, Mark Strong and Colin Firth. Richard Madden shows up at the very end of the film, giving his all for his few minutes of screen time. The real shining star of the film, and arguably the film’s biggest highlight, is Andrew Scott’s Lieutenant Leslie, a “completely over this shit” officer who just wants to take a nap and get the baby-faced youngsters away from him.

It’s a bit ironic, though, that in the year Martin Scorsese complained about superhero films being “theme parks” 1917 would win Best Picture at the Golden Globes, because it’s practically a roller coaster. I’m reminded a lot of seeing Gravity for the first time and that film’s ability to turn the cinematic medium into a straight-up thrill ride. The continuous take—I refuse to call it “one shot” because not only is there masked editing all over the film, but there’s quite literally a hard cut halfway through the film—technique makes it feel almost like a video game, immersing us in the action occasionally to the detriment of the film’s momentum. But for every moment that the gimmick bogs the film down, there are a handful more where it is urgent and driven. I’m not entirely sure the trickery is always the right choice, nor am I convinced that it wouldn’t benefit from more traditional editing, but when it works, it’s masterful.

Ryan's Top 10 Films of 2019 Previous
Discourse Correction: AVATAR and the Impactful Lack of... Next