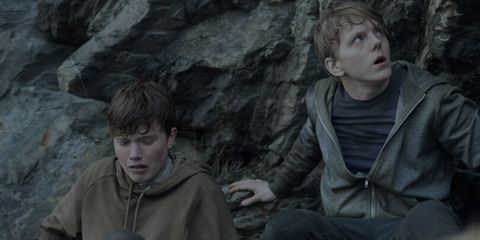 On 22 july 2011, Norwegian right-wing extremist Anders Behring Breivik placed and detonated a bomb in Oslo’s regjeringskvartalet, a building complex in the city centre that hosts many offices for the Norwegian government. This attack killed eight people and injured over 200. Breivik then donned a makeshift police uniform and ventured towards Utøya, a small island where a summer camp for members of the Worker’s Youth League (the youth division of the then ruling Norwegian Labour Party). Masquerading as a police officer sent to protect the people on the island, he went on a shooting spree, killing 69 people and injuring over 110 more.

It’s not that hard to imagine what attracted Paul Greengrass to this story. He’d already tackled traumatic events with such celebrated films as Captain Philips and United 93, both films that tell the story of these events from the perspective of the people they happened to, without all the usual window dressing and overt dramatization that often plagues “based on a true story” films like these. It’s easy to imagine Greengrass making a film about the 2011 Norway terrorist attacks that never even leaves Utøya, apart from maybe a cursory mention of the Oslo bombing. With that, there’s just one problem. That film already exists, and Greengrass had nothing to do with it.

Greengrass’ 22 July arrives on Netflix and in select theaters more than half a year after Erik Poppe’s somewhat confusingly named U – July 22 premiered at the Berlinale early this year1. A real time re-enactment of the Utøya attack shot in a single take, it’s hard to look at 22 July and not get the sense that Paul Greengrass has already been out Greengrass-ed. His and Poppe’s film differ in quite a few key areas. The Norwegian film is based on the account of survivors, but all the characters portrayed in it are fictional. 22 July is based on Åsne Seierstad’s book One of Us and does feature actors playing real people. Poppe’s film never shows Breivik, while Greengrass has him at the forefront, played by Anders Danielsen Lie2 But the biggest difference is that Poppe’s film ends as the attacks do, much like United 93 does, while Greengrass’ film has barely even begun at that point.

In fact, more than 100 minutes of July 22’s somewhat interminable 144 minute runtime are devoted to the aftermath of the attacks. Breivik arrives at the island at the 18-minute mark and is in chains at the 30-minute mark. Without any real indication that large lapses of time are skipped over in this sequence, you’d be forgiven for thinking the event went down in ten minutes in real life, while it actually lasted for 72 harrowing minutes. That’s not the say the scenes on Utøya in this film are not impactful—innocent teens running away in fear and brutally being murdered will always be impactful. But the inciting event feels like an afterthought for Greengrass. He barely gives us any time with the kids and supervisors on the island before the shooting starts and never really latches on any of the people on the island as a point of identification for the audience.

Instead, he constantly cuts between disoriented groups of teens scrambling around the island and Breivik coolly walking around and shooting whoever he can. The decision to have Breivik at the forefront of a large part of this section of the film feels very out of place in a film of this kind. Of course, there’s nothing wrong with a killer in a schlocky horror or action movie, but filming a real life right-wing mass murderer like one would Michael Myers or John Wick feels exploitative at best and downright disrespectful to the victims at worst. It also doesn’t help that Danielsen Lie – who vaguely resembles a less buff Chris Evans – is way more handsome than the real Breivik and therefore occasionally looks like an action hero.

To his – and Greengrass’ and Seierstad’s, who wrote the screenplay together – credit, Danielsen Lie never attempts to humanizes Breivik and gives probably the best performance in the film. Especially in his scenes with his lawyer Geir Lippestad (Jon Øigarden). A member of the Labour Party, Lippestad obviously does not agree with Breivik’s actions, but is legally obliged to defend him since Breivik personally requested him and his struggle is, if a tad undercooked, one of the most fascinating aspects of the film. The scenes where Lippestad sits down and talks with Breivik are the only ones where Greengrass comes close to recapturing some of the tension that made his early work in this film sing. In all other parts of the film, his direction feels strangely lethargic, with the two major threads that comprise the films back half – one PTSD-stricken survivor’s (Jonas Strand Gravli) road to recovery and Breivik’s eventual trial – never really coming alive.

Even if a Greengrass was indeed out-Greengrassed, that didn’t mean there was no way he could make an interesting film out of these terrorist attacks3. There were tons of avenues in these events he could have chosen to explore that would probably have made for a very interesting film, but he neglects all of them. The resulting film doesn’t have anything new to say about the culture from which Breivik came and which caused him to commit these deeds, nor does it say anything about the predicament of the victims or the survivors, nor about that of anyone else involved in the aftermath. Instead, 22 July just lays out events for you over 144 minutes painstakingly slow minutes, without zeroing in on any of it in a meaningful way. 144 minutes you could also spend a fraction of reading the Wikipedia page for the attacks, watching the movie won’t give you any more insight than that would.

Review: BAD TIMES AT THE EL ROYALE Previous
Terminator, Technophobia and Timeliness Next