Review: A BEAUTIFUL DAY IN THE NEIGHBORHOOD 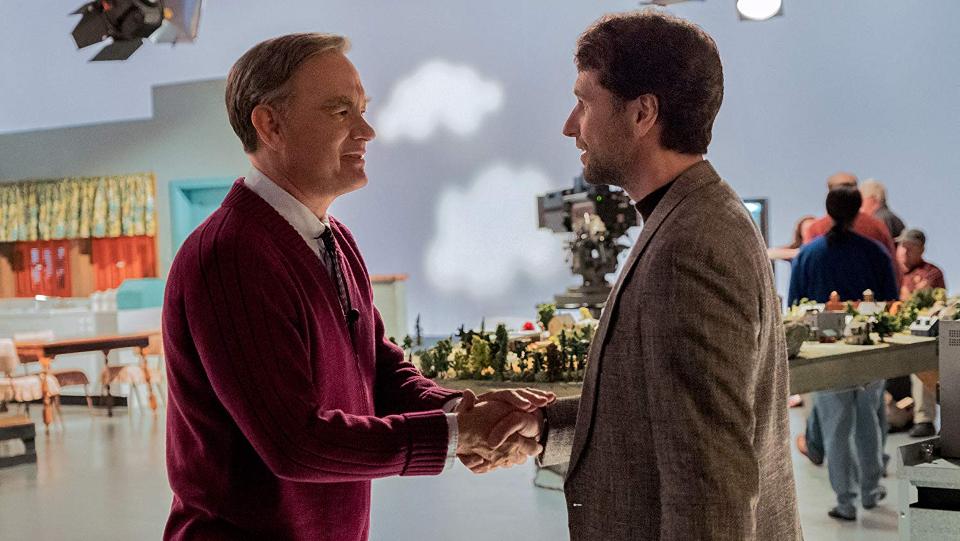 A man walks into a room and takes off his sport coat. He puts it away in a closet and puts on a cardigan. After zipping it up, he sits down, takes off his dress shoes, and puts on his sneakers. He sings while he does these things, and when he is done, he looks directly into your eyes, and says, “hello neighbor.”

Tom Junod describes this sequence of events multiple times in his 1998 article, “Can You Say… “Hero”?”, and it’s also how A Beautiful Day In The Neighborhood, the movie inspired by his profile on Fred Rogers – or as we all knew him, Mister Rogers – begins.

For those that spent the entirety of the 20th century under a rock, or who were perhaps not yet born or old enough while he was on the air, it’s valuable to take a moment to provide a bit of context. Fred Rogers was the host of Mister Rogers’ Neighborhood, a children’s educational television program that aired nationwide from February of 1968 until August of 2001. On the show, Mister Rogers, as his viewers knew him, would endeavor to teach children how to deal with their emotions in a healthy manner. The show was an institution, and Mister Rogers was an icon, based on nothing but his kindness and his daily promise to children that he liked them just the way they were.

A Beautiful Day In The Neighborhood is a semi-fictional telling of how Junod wrote his profile of Mister Rogers. In the movie, Junod is renamed Lloyd Vogel (played by Matthew Rhys), and though some events have been restructured and re-shaped in order to make them more cinematic, the essence of the piece remains. The film, just like the article, is as much about the writer as the subject. Both posit rightly, that it is impossible to talk about the man, Fred Rogers (played by Tom Hanks) without talking about yourself, because that was his favorite subject. You, your thoughts, your feelings, your experiences.

Lloyd is having a bit of a hard time. He’s angry, his father just tried to come back into his life after years and Lloyd wants nothing to do with him. He’s scared because he’s a relatively new father himself and feels unsure. These emotions are adding up and creating destructive tendencies. Just days before he meets Mister Rogers for the first time he gets a shiner after he punches his dad at his sister’s wedding and tries to fight the guy that attempts to pull him away. After reluctantly flying to Pittsburgh to meet with Rogers, his shiner, which he claims as a softball injury, instantly becomes the center of attention. You see, Rogers only ever wanted to talk about other people, and he had an uncanny ability to get them to talk about themselves. It takes him mere minutes to break through Lloyd’s story to the truth of the injury. And once he learns of the internal pain that the external pain is masking, he quickly decides that this will be a subject that he will continually return to.

From there the film alternates from Lloyd’s struggles in his personal life to his conversations with Rogers, and the journey the character goes on is profound. Like Mister Rogers’ Neighborhood did for children, this film is deeply concerned with helping the adults in the audience name, feel, accept, and process their emotions, and they use Lloyd and his conversations with Rogers to do just that. Perhaps the most daring moment in the film takes place in a diner where Rogers invites Lloyd to join him in a one-minute self therapy exercise that requires complete silence, as he asks him to reflect “on the people that loved you to where you are today.”

Most films would cut this up, or suddenly cut to the aftermath of this epiphany, but this isn’t most films, and to cut away would run counter to the film’s purpose. Instead, the movie sits with us for the full minute, inviting us to join them, with Hanks as Mister Rogers looking directly at us through the camera. It was one of the most affecting minutes of cinema I have experienced in my lifetime, as just like Rogers promises Lloyd, those people in my own life came flooding to me, producing a moment of pure catharsis that borders on impossible to describe.

The “one minute” scene is only one of many examples of the incredibly bold choices that the film makes throughout its run-time. Instead of your standard establishing shots, the film chooses to depict travel and cityscapes with the same types of models with which Rogers would represent the world outside his living room on the show, and there’s a dream sequence that occurs roughly halfway into the movie that runs right up to the line and risks losing its audience in the process, going into something truly odd in order to help further communicate the mindset of its characters. Director Marielle Heller has made a movie that has no interest in being cinematically unambitious Oscar bait. Sure, this movie will almost certainly be nominated for its own share of awards, but there’s nothing cynical or packaged about the way that it is getting there. It wants to intimately introduce us to Mister Rogers, and reacquaint us with him in the way that we knew him as children, but it knows that as adults our needs are different, so it chooses to bring us there by way of the story of someone not unlike ourselves, and show how deeply Fred Rogers cared for those that viewed themselves as broken.

It is difficult to talk about this movie without discussing Fred Rogers as a person, after all, that’s what the movie is about: him, and his drive to help others by extending grace and asking them to extend it in return. There’s a beautiful quote in both the film and in Tom Junod’s article; I will refrain from giving the full context because I think the beauty of that context is something that a viewer should experience first hand while watching the film, but I want to share the quote because it gets to the heart of who Fred Rogers was.

Upon meeting someone who was struggling in their particular moment in life, Rogers asked them to pray for him. When asked why, he replied “because I think that anyone who has gone through challenges like that is very close to God.” Fred Rogers was a man who lived his life in a manner that Junod described as “greedy for grace.” He sought it from people every day, and took every opportunity to give it in return. It is no coincidence that he spent large portions of his show teaching his audience of children the value of grace, and how to extend it to others. Because it goes to the heart of his faith and philosophy. The neighborhood was everywhere, and everyone was his neighbor, and Mister Rogers loved his neighbors and wanted nothing more than for them to give love to others.

Hanks and Rhys astound in this film, there’s no other way to put it. Hanks is completely transformed, and it takes only seconds for him to completely disappear into one of the greatest icons of the 20th century, and Rhys’ understated and multi-layered performance opposite him is a sight to behold. Hanks’ Rogers exudes the warmth and childlike grace for which he was known, and Rhys adeptly portrays Lloyd as a man that desperately needs it, but is far too stubborn to ask for it and too proud to accept it. Their scenes together feature the push and pull of two amazing performers at the top of their game, in a series of moves and countermoves that bring their characters to life to astounding effect. Watching Hanks as Rogers using every tool in his toolbox to attempt to disarm Lloyd and get him to open up, and the restrained frantic energy with which Rhys portrays Lloyd’s attempts to guard against this was one of my favorite cinematic experiences of the year.

A Beautiful Day In The Neighborhood is one of the most profound and touching films of the year, and more than that, it is one of the absolute best. Every step of the way the cast and crew work together to create a film that has value beyond mere entertainment. True, it is entertaining and enjoyable, but that isn’t its highest goal. Like the man it’s about, its highest goal is helping. Mister Rogers was famous for telling children to “look for the helpers,” and the people that worked to make A Beautiful Day In The Neighborhood should be proud to call themselves just that.

A man walks over to a chair, sits down, and while singing takes off his sneakers and slips into his dress shoes. He walks over to his closet, takes off his cardigan and puts on his sport coat. He waves goodbye, and tells us that he will see us next time. Because, you see, we didn’t just spend two hours at the movies, we spent a day in his neighborhood, and we are better for it.