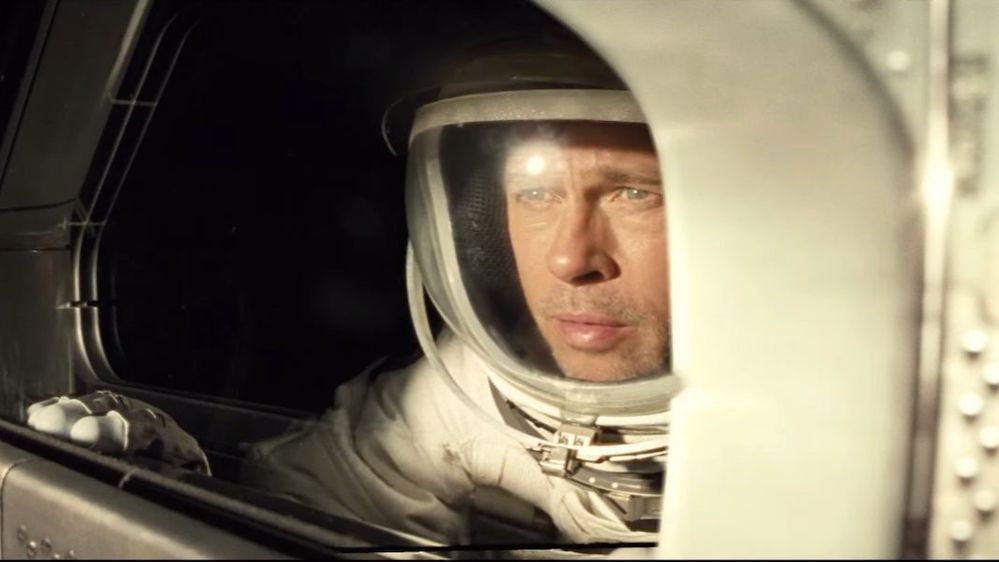 Yes, I know all the reasons it seems like you would, but those are the fun parts of being in space, the good parts. The books have to be balanced somewhere, and there’s so many practical considerations and obstacles that everyone who goes to space barely has time to enjoy it.

Ad Astra has everything armchair astrophysicists want from a movie: Long, loving shots of multi-stage rockets burning away like candle wicks as they leave the atmosphere, man-made structures dwarfed by the size of the cosmos, sweeping movement in zero gravity. For everyone else, it’s also an adventure story about Brad Pitt as a heroic astronaut, who must overcome all those extraterrestrial hardships to save humanity from spaceborne bad vibes with explosions and punches.

Technically they’re cosmic rays, but in practice they’re bad vibes, and if not for Brad Pitt’s efforts they would harsh the buzz of every human alive.

On the surface, it sounds like a sure-fire crowd pleaser positioned to hit big in the same way other space movies like The Martian and Gravity did, with a rousing story about the triumph of the human spirit over impossible odds. I doubt that happens, though, because Ad Astra is playing a more ambitious game than that, one that’s too profound to be anything but a risk in a movie about Brad Pitt saving the world:

The movie wants to interrogate the idea of going into space at all.

Ad Astra presents us with a future world where humankind has permanently settled on the Moon and Mars, and is already looking out to the next milestones. Not just the outer planets but beyond the solar system, and any sign of alien life. Even on other planets, the same people still look up at the same stars and ask the same questions – and then generally go back to the same dull routine that we do on this planet. There’s a real lack of romance whenever we see these space colonies. They’re not just utilitarian but downright boring, filled with tired-looking people in suits and sad little signs on the walls. It’s a sobering thought: however many years down the line, the brutalism debate will remain undecided.

Any architects in the comments are invited to tell me if there’s an artistic term for the almost purely utilitarian design of most space technology.

It’s far from the only issue that we’ve taken with us to space. Crime, war, faith, bureaucracy, cruelty, envy, hubris, plain old embarrassment and fear – none of these things have gone away just because we’ve slipped some surly bonds. It’s a pretty resonant concept in SF, but not one that usually gets this much focus on the big screen, as it all plays out amidst gorgeous and serene views of the never-ending celestial ballet, and Brad Pitt narrating how down in the dumps it all makes him feel.

Speaking of which, the movie isn’t just ad astra (Latin for “to the stars”), it’s dirigium per astra (Latin for “star-driven”). This is a true-blue Brad Pitt vehicle. The veteran leading man sinking his teeth into a sumptuous four-course meal of acting. He effortlessly switches between capability and fatigue, a movie star’s confidence and a Large Adult Son’s insecurity. Because he isn’t just playing a heroic astronaut in his own right, he’s the son of an even more heroic astronaut. Tommy Lee Jones is Pitt’s father, a pioneer of exploration who’s swelled to almost folk hero proportions since he was lost in space years ago, on the first manned mission outside the heliosphere. 1

Since this is a movie, when the bad vibes from space threaten humanity, they turn out to have a connection to Jones’ last mission, so Pitt is given the task of trying to establish contact with him. Despite the very naturalistic, ordinary feel of the world, a lot of Ad Astra is operating on the level of something like Armageddon. I mentioned punches and explosions earlier. In terms of the plot the movie is largely an action-adventure, with Pitt having to outfight and outwit all manner of dangers, from the inevitable spaceship malfunctions to shortsighted pencil-pushers to pugnacious astronauts to no-joke space pirates to non-human forms of life I won’t mention further.

Not to get all Giorgio Tsoukalos on you, but I’m not saying it’s aliens.

It’s impressive how the movie blends the exciting with the thoughtful, weaving the themes through the action. Director and co-writer James Gray has a history of low-key, thoughtful takes on genre material – from his procedural outer-borough vision of New York crime movies like The Yards to his fastidiously historical take on the adventure story in The Lost City of Z. He approaches science fiction with a gusto I haven’t seen since Denis Villeneuve’s Arrival. The movie is filled with these unusual practical touches, like how Pitt needs to take a psychological evaluation every so often, both to make sure the solitude of space doesn’t drive him crazy and so he can tell the audience how he’s feeling.

Of course, as mentioned previously, he also has rather a lot of narration that does the same job less elegantly. If I have an issue with the movie, it’s that certain elements in both plot and style feel far too conventional when compared to the rest of the movie – most of which feel redundant, and give the distinct whiff of the studio notes that apparently led to significant reshoots. Certain information is given over and over again for fear the audience will miss it; the resolution of the plot feels a little too tidy for such a downbeat and naturalistic world. Also, remember how refreshing it was in The Martian that Matt Damon didn’t have some kind of love interest he was pining for back on Earth? Ad Astra doesn’t offer that kind of refreshment.

Of course, that’s not to say it hasn’t got refreshment all its own. My quibbles are just minor seams in an elegant, timeless and strange design. Ad Astra is a must-see for anyone who wants their low culture just a little bit higher, or vice versa – an internal, artsy character drama with the plot of a Syfy Channel Original Movie. What else can you hope for?

Off the Beaten Path: DOUBLE TEAM Previous
1UPtown: ALIENS Next