Saving empathy in the end of the world 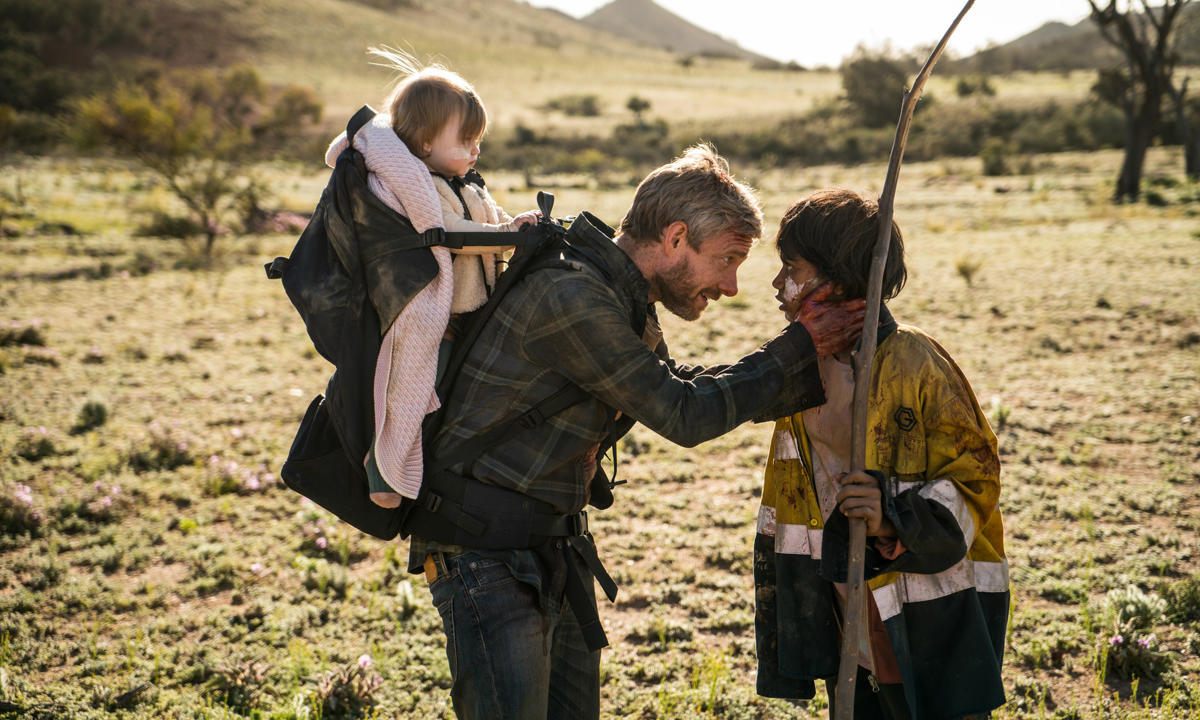 Throughout his career, Martin Freeman has stood out thanks to the everyman warmth he provides to larger than life scenarios, making his particular screen presence an easy fit for self-insert characters. Cargo makes an effective use of that persona to introduce viewers to its context. The movie begins with Freeman’s character, Andy, greeting a random family on the distance, only for the father in the family to unholster a gun while looking at Andy with an impatient gesture; informing us about the hostile and emotionally detached world the story takes place in.

Andy lives with his wife and daughter in a land where society has been overtaken by a zombie infection. When his wife dies and he becomes a host of the aforementioned infection, it is his mission to take his daughter to wherever she’ll be safe from himself in the span of 48 hours, the time it takes for a person to become a zombie once they get bitten by one.

Plot-wise, Cargo is not very dense. It mostly amounts to Andy and his daughter moving from place to place and holding their line against the zombies and other threats. Many of the problems they face could be avoided with simple decisions, which can make the story somewhat frustrating at times. Not to mention that for the most part, Andy is reacting to whatever the script throws at him rather than taking an active position where he determines fundamental events in the movie.

There’s also a lack of escalation to properly convey that Andy’s situation is getting worse by the hour. Even though the film remains consistently compelling throughout its 105 minute runtime, the challenges Andy faces are more or less within the same level of gravity.

Fortunately, Cargo has a bold craftsmanship that elevates its fairly formulaic premise to a gut-kicking cinematic experience. The cinematography is gorgeous, providing several establishing shots that show Andy in vast desolated territories where nature’s beauty contrasts with the story’s bleakness; highlighting the fact that fate isn’t exactly on Andy’s side. The camera keeps a prudent distance from the zombies, illuminating them with the light source on their back, and consequently, making them look like disturbing otherworldly shadows. Their awkward body movements add to the tension and quickly establishes them as threats to run away from. These striking visuals are complimented with a great soundtrack that gets your adrenaline pumping right after giving you time to breathe.

Directors Ben Howling and Yolanda Ramke enrich the picture with socially and politically charged world-building that prioritizes imagery over exposition, making the landscape easy to understand and get immersed in. Especially because the character dynamics can be associated to issues like domestic abuse and colonialism. It’s an environment where sympathy has died and every human interaction is approached with distrust and rancor, and that can be even more scary than the zombies themselves.

The pacing is deliberately slow. However, that helps to make the horror hit harder (there are a few excellent jump scares), and it gives the character building moments proper time to make us connect with them, whether by subtly conveyed backstory or emotional beats that result from the never-stopping stress.

Cargo is essentially the Martin Freeman show, and he carries the whole project with aplomb. His charisma works as a tender hand for us to hold during a tense ride where death lies around every corner. His kindness is regularly put to the test, and it shows in a weariness that pays off with loud and potent displays of desperation and grief.

The supporting actors are solid, even though most of them don’t get a lot to do from a development standpoint. Their main purpose is to be plot mechanisms. The only exception to that is newcomer Simone Landers as Thoomi, a girl with a small, yet memorable arc that compliments Andy’s journey and adds resonance to the proceedings.

What makes Cargo so successful is that it overcomes its production and screenwriting limitations to become a captivating genre exercise that delivers scares and heartfelt moments in equal measure and with assured technical expertise. Most importantly, it’s a story that reminds us to never let our own problems turn us immune to the suffering of others.