“For what profits a man if he gains the whole world but loses his own soul.” 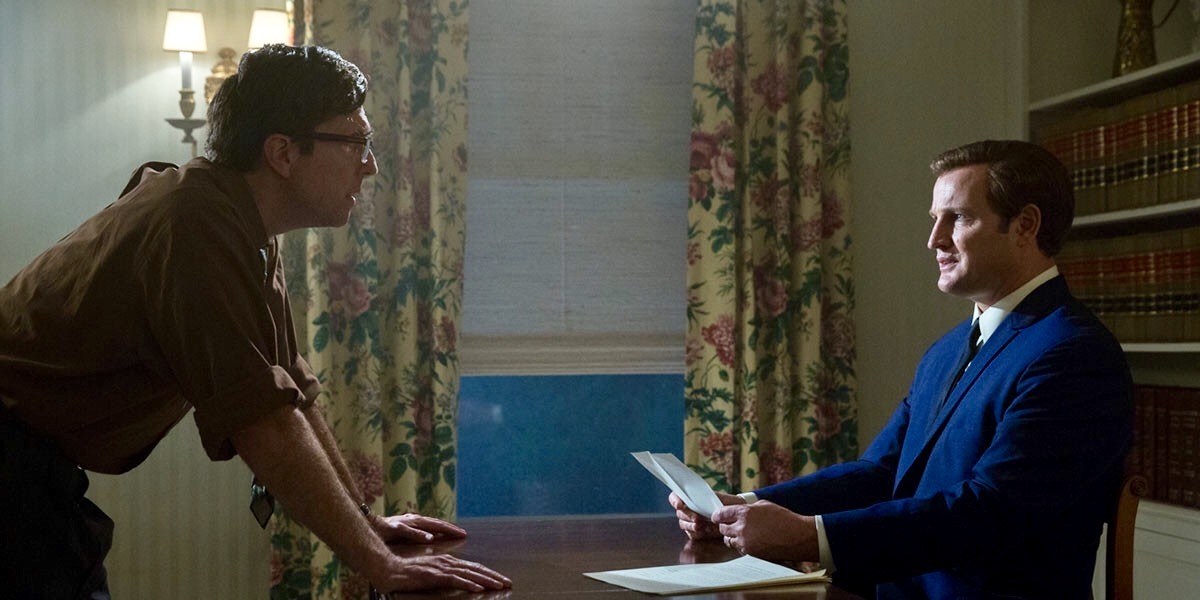 On a July night in 1969, Ted Kennedy drove off a bridge and overturned his car in a shallow salt pond at Chappaquiddick in Martha’s Vineyard, Massachusetts. Kennedy walked away from the accident, but his passenger, Mary Jo Kopechne, didn’t. It’s believed that Kopechne survived the crash but slowly suffocated in a tiny air bubble, cold and alone, trapped inside the vehicle. It took her maybe as many as three or four hours to die. Meanwhile, Ted Kennedy was doing… well nobody knows for certain. But he didn’t report the accident until almost 9 hours later, well after Kopechne’s lifeless body, gray and deformed by rigor mortis, had been lifted from its watery grave. If Kennedy had reported the accident promptly, it’s possible that Kopechne would have survived. How Kennedy and Kopechne ended up in the water is still unexplained. Why Kennedy did nothing about it defies any explanation.

Chappaquiddick, from director John Curran (Stone, The Painted Veil) and first-time screenwriters Taylor Allen and Andrew Logan, is a quasi-journalistic exploration of Kopechne’s death and the subsequent, clumsy attempts by Kennedy and his powerful family to escape any serious consequences for it. But it’s no polemic–if you’re looking for a vicious, partisan hit-piece or a desperate attempt to whitewash Kennedy’s misdeeds, you won’t find it. Rather, Chappaquiddick is more interested in examining the emotional truth of the event, which it posits is little more the sad tale of a rudderless dullard who, by inches, sold his soul to save his own ass. The film is virtually without frill or flourish, relying almost entirely on the skill and talent of its cast and visual team–costumers and production designers, especially–to guide you through the drama. It’s more Spotlight than JFK or Nixon, and it’s all the better for it.

The Ted Kennedy we first meet in Chappaquiddick, played here by Jason Clarke, is acutely aware of his unworthiness. He’s the last surviving son of the powerful Kennedy family, having lost all three of his vastly more competent brothers to tragedy. Joseph Jr., the oldest, was their overbearing father’s favorite and had been groomed since birth to be the first Catholic President of the United States. He was killed in Europe in 1944. John was the charmer, and he made it to the presidency and fulfilled their father’s dream. But then, of course, he was assassinated. Bobby was the smart one, and was poised for the presidency as well before he, too, was murdered. Ted, the youngest, is not as prepared or as charming or as smart–and he knows it. And if he’s ever tempted to forget it, someone is always nearby to remind him–a reporter, a family member, a friend. Even the stars, themselves, are there to remind Ted Kennedy of his mediocrity. Because at the very same time that Kennedy is trying to keep his own head above water, Apollo 11, his brother’s legacy, is on its historic journey to the moon. That might seem like heavy handed poetic license, but it’s actually true–the Chappaquiddick incident coincided exactly with the moon landing. While the Kennedy family should have been celebrating it’s ascent into the firmament in July 1969, it was instead consumed with trying to make sure Ted didn’t drag them down too far into the mud. For a brief moment in time, the myth of the Kennedys coincided perfectly with their reality.

This dichotomy is the heart of the film–Ted, who cannot measure up to the Kennedy family’s highest ideals and expectations, ultimately finds his place another way.

Kennedy is in Chappaquiddick in July 1969 to host a reunion for the so-called “Boiler Room Girls,” women who worked on Bobby’s 1968 campaign and who, it’s implied, will be called upon by Ted in 1972. Mary Jo Kopechne is one of these “Boiler Room Girls,” but she’s perhaps more skeptical than the others. Her idealism seems to have died with Bobby and she sees right through the Kennedys’ indecisive fourth-in-line. Joining Ted and Mary Jo at the reunion is Joe Gargan (Ed Helms, acquitting himself well in a rare dramatic role), Ted’s cousin, friend, and fixer. Joe is more credulous than Mary Jo–she was a true believer in Bobby, while Joe is a true believer in the Kennedys. They took him in when he was orphaned, and he looks at them through stubbornly rose-colored glasses. To Gargan, the Kennedys–and his “brother,” Ted–are a force for unalloyed good, a clan happily burdened by noblesse oblige.

After crashing his car into a pond and leaving Mary Jo to die, Ted struggles with how to respond to the problem–will he finally start acting “like a Kennedy” and, if so, what does that even mean? Gargan, true-believer that he is, tells Ted that it means integrity. He tells him to report the accident immediately, cooperate with the authorities and, in the end, resign his seat in the Senate. Ted’s ailing father, the cartoonishly villainous Joe Kennedy, Sr., has a different view. He has only one word of advice for his wayward son: “alibi.” When that fails, Joe Sr. assembles an army of lawyers, consultants, and back-channel fixers to cover for Ted. Chappaquiddick follows weak, indecisive, unworthy Ted as he vacillates back and forth between the ideals of his family, embodied by Gargan, and their reality, embodied by his father. One moment he’s telling himself that everything must be done with honor and a respect for the truth. The next, he’s spit-balling exculpatory lies and juvenile plays for public sympathy. When he wears a neck-brace to poor Mary Jo’s funeral, it begins to become apparent which path Ted will ultimately take.

Chappaquiddick suggests that it’s in the fiery crucible of his own cowardice and stupidity that Ted Kennedy finally discovered himself, and that who he found was neither the unworthy also-ran that Mary Jo and Ted’s father saw, nor the idealistic champion that Joe Gargan saw. Rather, Ted happens upon a powerful insight about himself, his family, and American politics at large–that the world wants him to say the right thing more than it wants him to do the right thing. So Ted finds liberation and self-actualization in a disingenuous public address, where he shirks responsibility, plays for sympathy, and lays the groundwork for the public to give him a free pass on killing a young woman. Chappaquiddick essentially culminates with a dramatic inversion of The King’s Speech–Ted’s speech is one where the adversity to be overcome is justice; where the goal is not to inspire, but to deceive; and where self-discovery is self-destruction. Joe Kennedy beams as the prodigal son comes home, borne aloft by sweet lies. Meanwhile, Joe Gargan, true believer, is forced to literally kneel before this new Ted Kennedy. He’s just off camera, holding the cue cards that will save Ted’s career but damn his soul. The heartbreak and anger on Joe’s face in this moment undercuts any sense that Ted has “triumphed.”

Chappaquiddick next confronts us with a chilling selection of contemporaneous on-the-street interviews with Kennedy’s constituents. Breathless and starry-eyed, they proclaim their willingness to vote for him again. The speech worked. Ted not only forged his own identity, at long last, but he saved his family’s ambitions as well. And all he had to do was tell people what they wanted to hear. As the closing title cards remind us, Kennedy went on to become a presidential candidate and the renowned “Lion of the Senate.” He is the fourth-longest serving senator in United States history. He made a Faustian bargain, and paid no worldly price. Although Chappaquiddick was written at a time when Hillary Clinton seemed destined for the presidency, lessons for the Trump era abound. One cannot consider how the Kennedys defied political gravity time and again, not even losing the support from their party in the death of a young woman, and not immediately wonder if the chickens haven’t somehow come home to roost.

In the film’s closing moments, we hear Kennedy’s voice–this time the real Kennedy. It’s another famous speech of his, the one he gave at the Democratic National Convention in 1980:

For all those whose cares have been our concern, the work goes on, the cause endures, the hope still lives, and the dream shall never die.

As the speech crescendos, we see the bridge again. Small waves move across the water, gently lapping against the supports. It’s peaceful–and why shouldn’t it be? It’s a graveyard. The cause, the hope, and the dream lived on, yes, but Mary Jo didn’t. Ted’s soul didn’t. In the end, Chappaquiddick leaves us with all there was and is to find in that sad event: a life lost, but a career saved.

Buckle Up! There's Going to be a FAST AND THE FURIOUS... Previous
The CRAZY RICH ASIANS Trailer Is Gleeful And Gorgeous Next