A mostly worthy successor to the title 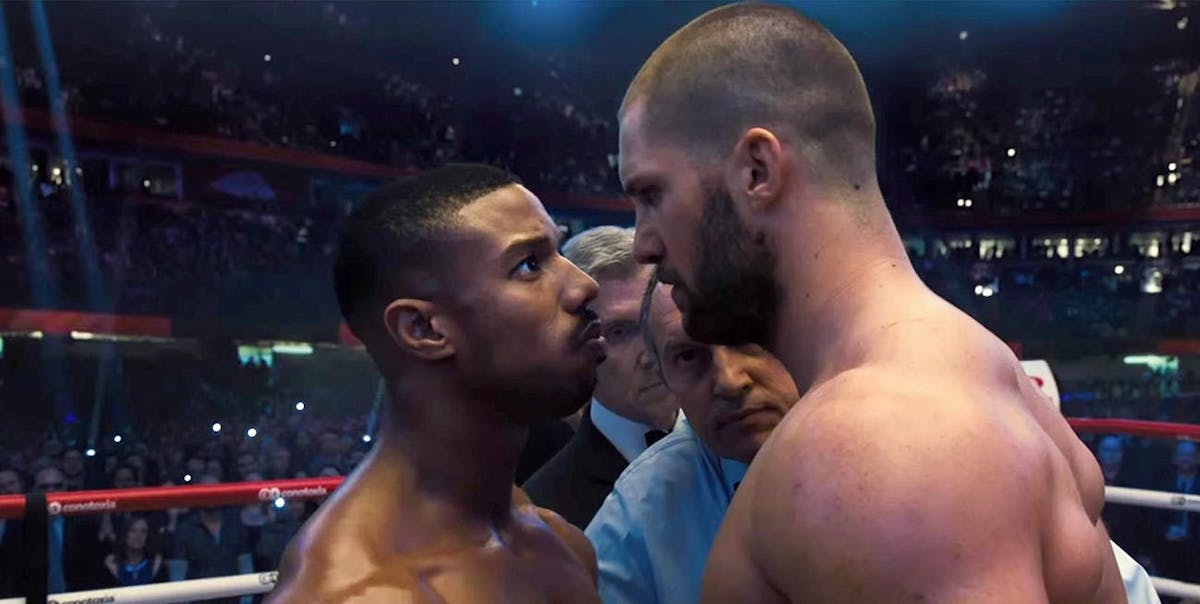 So how does Creed II stack up to the Rocky Legacy?

Imagine you’ve just made one of the best movies of the decade. A stunningly human, triumphantly earnest portrayal of a character who audiences can’t help but root for in droves, achieving some modicum of success against all odds. Learning along the way that the blessings in their lives far outweigh the challenges, and that the most valuable prize they can hope to gain in the course of their story is one only they, themselves can grant; self-respect. Dignity is tricky. We’re taught from a young age that humility is to be prized. And while being humble and working for the benefit of others is admirable and should be sought after, it’s also a great cudgel for cowing people who you consider beneath you. If Rocky (and Creed, to be sure) is about anything, it’s about shedding the expectations of others, especially those considered to be your ‘betters’, and carving out that little slice of the world that is yours alone.

So imagine you’ve just made the film that portrays that perfectly. The world is your oyster. People are lining up to shower you with accolades on this beautiful rendition of the human condition. What do you do now? If you’re Sylvester Stallone, the answer now is the same as it was in the 80s: you make a superhero movie. The numbered sequels to Rocky (somewhat barring the decidedly rootsier second and fifth entries) are, to a one, Kaiju fights. While they wear the character and extended cast of that seminal first film to varying degrees, they are VS movies1. If Rocky and Creed are about finding your self-respect, the sequels are to some extent about turning that into protecting your ego. But, lest you get it twisted, I don’t actually think this is a problem. See, I love the character of Rocky Balboa. The fact that Rocky exists at all is an absolute blessing that we should have holidays about. It, like long-tail spinoff Creed is basically a perfect movie, rooted in a character that I love so much I sometimes well up thinking about them. Ryan Coogler did for Adonis Creed what John Alvidsen did for Rocky Balboa. They made movies about characters so fully formed, with such a wonderful inner and outer life that you become utterly swept up in their quests for glory. It’s that connection that carries you through the near-cartoonishness of the numerical sequels of Rocky. And, to lesser necessity, it’s what will carry you through Creed II, which applies the structure of Rocky III and the story mechanics of Rocky II in its ultimate quest to finally redeem Rocky IV.

Creed II, directed by Stephen Caple, Jr., is the direct sequel to Ryan Coogler’s phenomenal Creed. That movie was absolute lightning in a bottle. The kind of film that comes along at just the right moment with just the right talent attached. After Stallone’s earnest and successful effort to redeem the Rocky series with Rocky Balboa, the idea to pass the torch to the son of Rocky’s greatest-rival-turned-best-friend Apollo Creed was an inspired choice, allowing the series to move ahead untethered to the past but able to tap into its tremendous heart. Creed’s crowning glory (beyond Coogler’s amazing direction) is the way it reckons with legacy in our lives. Adonis Creed, illegitimate son of former Heavyweight Champion Apollo Creed must fight through his own baggage with his absent father and a privileged life and mantle he never asked for to forge his own identity, in a cathartic display of power and growth. What really works in Creed II is the way we find our protagonist hasn’t fully internalized these lessons. Donny chafes at his own growth, settling old scores and trying to relive his arc in the first film instead of moving forward. Donny is Heavyweight Champ, but he doesn’t feel like it. He’s surrounded by loving family in the form of his mother, his trainer/father Rocky, and serious girlfriend Bianca, but he has no path ahead of him. Suddenly our underdog with nothing to lose has everything he could have wanted. Like so many of our own stories, that’s less a comfort than it sounds. In parallel, disgraced Russian boxer Ivan Drago lives an impoverished existence in Ukraine with his son, the brutally talented Viktor. Dishonored by Ivan’s defeat at Rocky’s hands 30 years ago, the Dragos subsist on a diet of fight training and bitterness, which is Viktor’s only connection to his cold and domineering father. In case you’ve been living under a rock, Ivan Drago, once the pride of the Soviet Union, also killed Donny’s father in the ring.

Into this existential crisis walks Faustian promoter, Buddy Marcelle. Buddy sees the opportunity of a lifetime in coordinating a grudge match between the new generation of Creeds and Dragos. Marcelle gins up resentments long past and fears unreckoned with in Ivan and Donny to create a narrative hook to sell to audiences. Suddenly, the Dragos are having their own training montages, and travelling to enemy turf Philadelphia like they’re some kind of Marvel supervillain team. Meanwhile, Donny’s fragile sense of pride and security leaves him utterly susceptible to Marcelle’s goading, chiding mustache twirls. It’s a brutally fast procession to an ill-advised match that Donny simply is not ready for, mentally or physically.

This is where I think a lot of people are going to have trouble with Creed II. Whereas the stakes of most of the best Rocky films are simply our hero’s self-respect and dignity, this installment hinges on our investment in Donny as a guy who can mature emotionally. For the first half of Creed II, Donny is adrift and directionless, and attaching that patented Creed fury to anything he can in a foolhardy bid for his own pride. His stubbornness and ego lead him to disrupt the life he’s worked so hard to build, and damage his family’s faith in him. He’s acting out like a child, because Donny is still kind of a kid. He lashes out at the sage advice of his loved ones, acting purely out of fear of losing what he’s got. If you’ve seen Rocky III, you already know that Donny will have to rise from crushing defeat to reclaim his self-respect, and fight from a place of growth and maturity. What Creed II hinges on is this journey from the prison we place ourselves in when we live by the expectations of others. When we act out of doubt and fear, rather than being true to what we believe in. Donny and Viktor should never have fought. At least not at this point in history. Donny may be a Creed, but he didn’t know Apollo from Adam. He’s fighting from wounded pride. Viktor is crushed underneath the expectations and experiences of his father (an engaging and melancholy Dolph Lundgren, who is very good), afraid to live his own life on his terms because of his father’s bitter disgrace. Bianca and Rocky are afraid of Donny’s angry pride, and fear that he’ll end up just like his father; a ghost in his child’s life. Not to be outshone, Rocky is wrestling with the ongoing quasi-estrangement (carried over from Rocky Balboa) from his son Robert that has filled him with lonely anxiety for a decade.

If all of this sounds like a lot, you’re not wrong. The biggest problem Creed II has (other than not being Creed) is that, like Rocky II it’s pushing so hard in so many directions that it occasionally loses steam. In the mad dash to give all the players a little business, some of the threads get a little short shrift. This is really hard to manage under the best of circumstances with the tightest control of story. While it displays an admirable ambition by trying to subvert its predecessor with a story about how we stumble, Creed II sometimes follows suit. The biggest victim of the story being told is inarguably Tessa Thompson’s wonderful Bianca, who despite having plenty to contend with on her own (her continuing loss of hearing, impending motherhood, and her husband being kind of a dipshit), often feels ancillary to Donny’s arc in the same way the numerical sequels sometimes sidelined Adrian. Tessa Thompson rescues the role by sheer charisma and ability, not to mention her dynamite music scenes2.

Struggling to stay on its feet at times, Creed II mightily rallies by the end. The cast assembled for the second chapter in Adonis Creed’s story are so good throughout, that they mostly land the thematic punches in what is clearly a more nebulous framework than the original. Even the Dragos, the biggest wildcard going into this entry, walk away from the movie as relatable and compelling, if thinly sketched. Caple (Coogler’s own pick for his replacement) balances out Stallone’s goofier tendencies in the script with absolutely dynamite fight direction and control of pacing. It would be easy to be cowed, being tagged to follow a bonafide genius like Coogler into the world he created, and opt to diverge wildly rather than risk falling short of that legacy, but Caple goes for it in the action and training scenes, and acquits himself well. It’s also clear that Caple is an enormous fan of the series, given the almost reverential way in which fanservice moments are woven into the film (and not always for the better). While he may be working from a tried and true template (almost a remix) of the established formula, Caple manages to infuse the proceedings with enough life, verve, and humanity that people will walk away feeling that familiar Balboa spring in their step. Even if Creed II feels more like an addition to the Rocky legacy than the Creed legacy, it’s a mostly worthy one.

Review: THE BALLAD OF BUSTER SCRUGGS Previous
Nicolas Roeg, 1928-2018, Will Continue to Haunt Us Next