A garish monstrosity...and we're not talking about the elephant 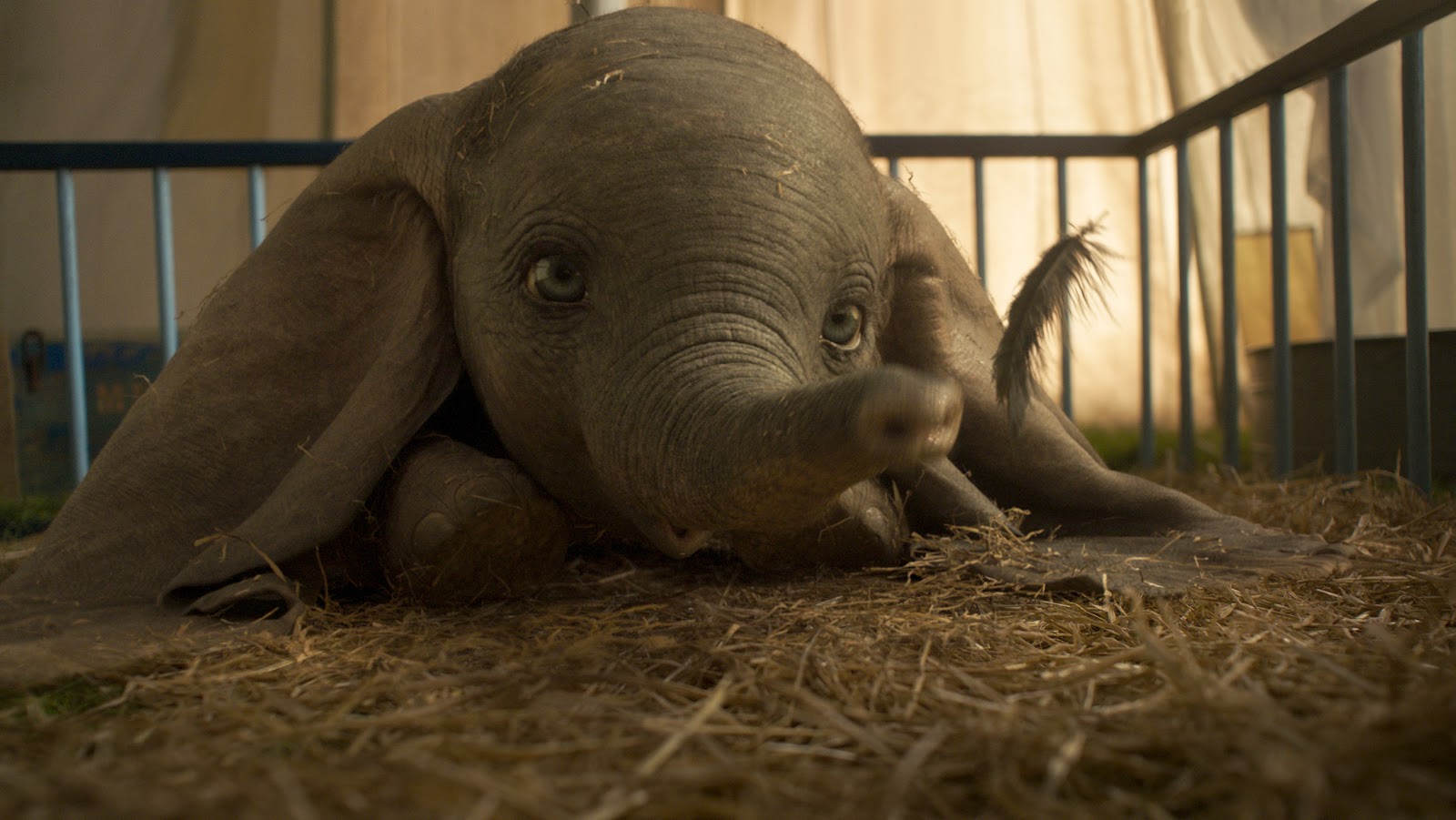 Remember when Bohemian Rhapsody featured a touring montage so shoddy and perfunctory – and with dinky titles denoting the locations that just screamed “graphic design is my passion” – we all had a good laugh at its expense and concluded that such a thing was only possible with a near once-in-a-lifetime ill-fated production? Dumbo starts with a touring montage introducing the circus around which most of the film revolves that is on about that level, and what follows doesn’t get a whole lot better.

That is not to say that Dumbo had anywhere near the troubled production that much maligned multiple-Oscar winner had. Even though it might often feel as if large stretches of the film were actually directed by a robot that has seen every Tim Burton movie and nothing else instead of the man himself, there were no late-in-production behind the scenes director changes. Nor was there outside influence from people with a personal connection with the material the film is based on. Helen A. Meyer, the writer of the 1939 children’s book Walt Disney based the original film on, died in 1999 and even if she had somehow still been alive, I doubt she’d really have cared. No, what Dumbo’s exceptionally lazy and clumsily opening moments prove is that Disney’s latest live-action remake is a film no one involved in really gave a shit about.

Certainly not screenwriter Ehren Kruger (prior credits include the middle three of Michael Bay’s Transformers pentalogy), whose screenplay only has two modes: cloying sentimentality and grotesque whimsy, two things in which Tim Burton has always trafficked, for better or worse. But even every 90s goth kid’s favorite director doesn’t seem to care much about Dumbo, the circus or any of its inhabitants. Familiar Burton-isms are sprinkled throughout: The main human character has severe daddy issues, because of course she does. And positioning a set of outcasts as a family unit is also far from foreign territory for him. But what’s missing from the story and the direction is a spark of life, any sign that any of the involved aren’t just going through the motions.

You definitely won’t find any of that in the aforementioned screenplay. Kruger was tasked with turning a barely feature film1 into something with more meat on his bones, which isn’t an easy task, but there must have been more interesting avenues to take with a 112-minute Dumbo film than “sideline Dumbo for most of the running time.” Instead, Kruger focuses on Holt Farrier (Colin Farrell) a widowed war veteran who returns to the circus he once called a home missing one arm. He has a troubled relationship with his daughter Millie (Nico Parker)2, who resents the circus lifestyle and instead wishes to pursue a more scientific career.

Farrier returns to the circus hoping to resume his starmaking rodeo act, but ringmaster Max Medici (Danny DeVito) has sold his horses due to financial troubles and instead appoints him as a caretaker for an elephant he recently aquired. When said elephant gives birth to a baby with abnormally large ears, said baby quickly becomes the laughing stock of the circus, until Millie discovers he can use his ears to fly, which makes him the star attraction. This then attracts the attention of “Walt Disney” aka V.A. Vandevere (Michael Keaton), a capitalist entrepreneur who wishes to make Dumbo3 the centerpiece of his attraction park Dreamland.

That, on paper, is not a terrible plot, but it never coheres. The main problem is that none of the cast seem to be in the same movie. Farrell is in peak Serious Actor Mode here, bringing a wounded vulnerability to Farrier that calls to mind his collaborations with Michael McDonagh, but is at complete odds with the mayhem surrounding him. Mayhem brought out mostly by Burton’s insistence of having nearly every other actor partake in the mugging olympics. There’s DeVito and Keaton eating up the scenery as if Batman Returns never ended, with the former – who gets maybe a handful of lines that consist of more than one hysterically screamed word – coming across like he’s in a particularly deranged episode of It’s Always Sunny. But this doesn’t end at the main cast; almost all the bit parts are filled by people who are eating the scenery by the spoonful.

Worst offender in that regard is Joseph Gatt4, sporting a truly terrible accent as a thinly sketched nefarious sort who – get this – wears elephant skin boots. It’s that sort of broad strokes characterization which Kruger gives to almost all his characters, which means they would need the performances to truly come alive and well, let’s just say no one in the cast is exactly in top form here. The only one who emerges somewhat unscathed is Eva Green5 as Dreamland’s pre-Dumbo star attraction, but even she’s occasionally defeated by the material.

With none of the characters interesting enough to latch onto, the main level on which Dumbo works is as eye candy. The choice for mostly practical sets over green screen pays off, as it is easily the best looking Disney remake so far. But even then, Burton’s penchant for grotesquerie takes over sometimes. The sequence in which Dumbo truly takes flight for the first time is the closest the film ever comes to some actual movie magic, but that is offset by the elephant being dressed up in absolutely horrifying clown makeup.

That leaves Dumbo as a failure on pretty much every level. It’s performances are mostly off-putting, the cloying sentimentality of the story is so manufactured as to almost be offensive and the only times it’s nice to look at is when its director manages to reign in his usual style. A garish monstrosity without much reason to exist; I had Dumbo pegged as having the possibility to become one of the better of Disney’s much-maligned live-action remakes, but instead it might be one of the worst.