Paul Verhoeven's back and he's delivered one of his best and most difficult films. 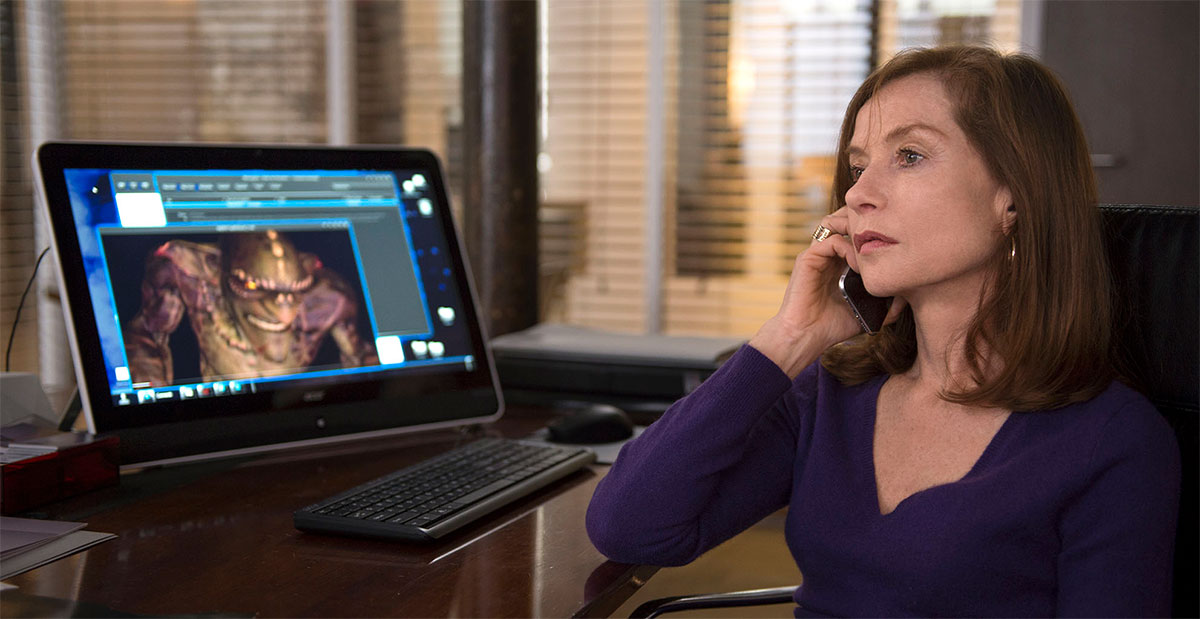 Elle opens with Michèle Leblanc (Isabelle Huppert) being raped on the floor of her posh home. It is harsh and brutal and not shot to titillate. Michèle doesn’t panic or cry after her masked assailant runs off. She doesn’t call the police or go to the hospital. Instead, she calmly neatens up. She sweeps up the broken glass and puts everything back in its place. Then she moves on with her day. It’s an audacious opening to an even more audacious film. Then again, this is Paul Verhoeven we’re talking about. Audacity is to be expected.

After ten years away from directing, Verhoeven has returned with a film that may surprise viewers who are more familiar with his broad, bloody and satirical American work. It is disturbing, transgressive and at times hilarious, but also visually restrained and filled with character nuance. In other words, the guy’s still got it. He’s as good as he’s ever been.

After her assault, we follow Michèle through her day-to-day life. She runs a video game company, directing the development of a violent and sexually explicit action game (featuring a scene of demonic tentacle rape). She butts heads with younger, male underlings. She carries on a joyless, casual affair with the husband of her best friend. She tries (and generally fails) to manage her relationship with her lunkheaded son and the unstable and very pregnant young woman he is in love with.

Mixed in with all this are the threatening messages she is receiving, which prompt her to try and identify her assailant. In a more conventional film, this would lead into a giallo-esque whodunit, probably with a revenge story capper, but that’s not what Verhoeven is interested in. Instead of crafting a straightforward genre narrative, he uses all these elements to build out his character study of Michèle as well as the film’s thematic landscape of trauma, dynamics of power and how the past can affect us.

For what it’s worth, Verhoeven or no, none of this would work without Isabelle Huppert. While the role of Michèle is complex and incredibly fascinating, it is not overtly flashy. Nevertheless, Huppert is able to communicate volumes through nothing but stillness and a slight shift in expression. It’s a miracle of a performance and you won’t be able to take your eyes off her.

Depending on how you look at it, the timing of Elle’s release is either lucky or exceptionally unfortunate. In the current zeitgeist, the issue of rape — ever-present but usually spoken of quietly if at all — has been brought out into the daylight. Our current President-elect has boasted of grabbing women “by the pussy,” and beloved pop-cultural figures have been revealed to be serial rapists. People are understandably on edge when it comes to the subject, and any film that attempts to address it has a hell of a minefield to navigate. That what Verhoeven is doing here is so unconventional and so funny makes his task even harder. I can easily imagine some people finding aspects of Elle offensive, and I am not one to dismiss that reaction offhand. It’s a deeply uncomfortable and off-kilter film.

But it’s clear that Verhoeven isn’t going for cheap shocks and titillation. He is not trying to provoke outrage for the sake of outrage. Elle is a masterfully crafted and thematically dense movie, anchored by a remarkable central performance, and is one of the best films of the year

Review: FANTASTIC BEASTS AND WHERE TO FIND THEM Previous
How Katniss Helped Trump Win Next