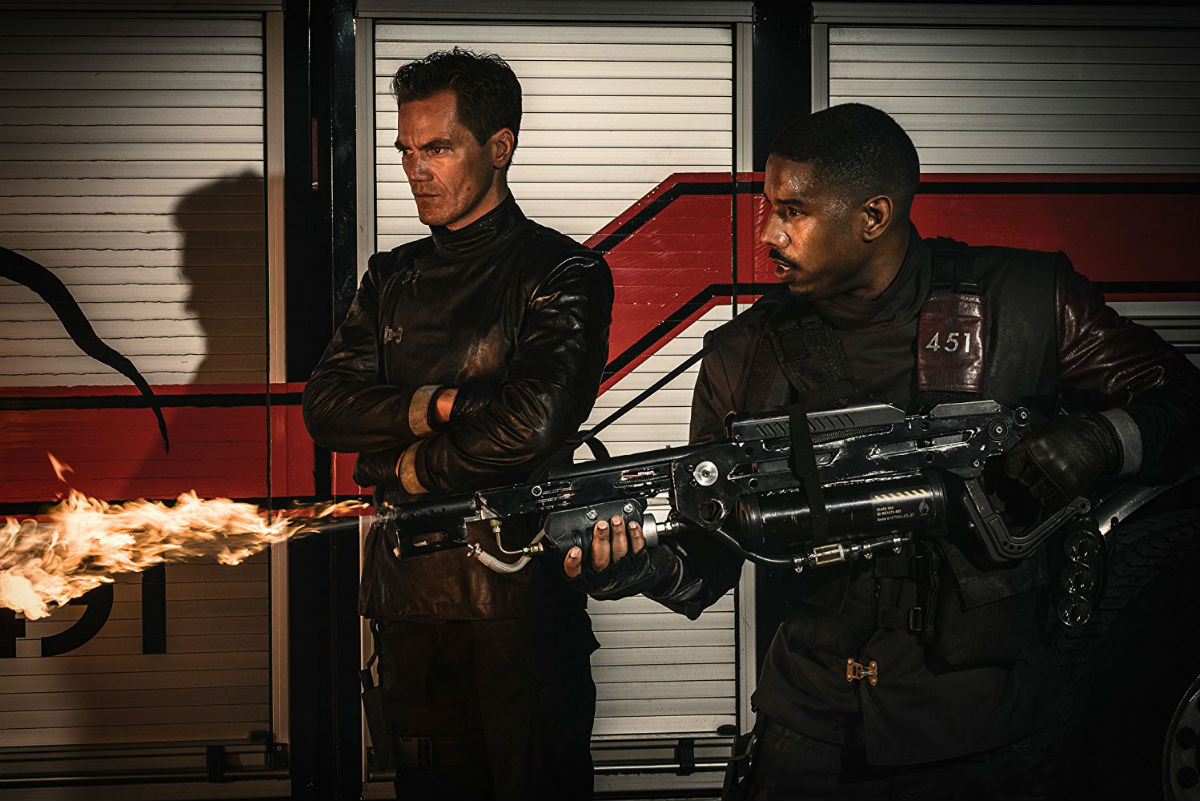 For the record, I’m not familiar with the Ray Bradbury novel Fahrenheit 451 is based on, so I don’t know if it succeeds as an adaptation or not. However, I was very excited by the prospect of director Ramin Bahrani reuniting with Michael Shannon (they worked together in the brilliant 99 Homes) to tell a story with themes pertinent to our current political climate. Not to mention the presence of Michael B. Jordan, fresh from his triumphant turn in Black Panther.

The world of the movie is a heightened version of our own. The government is unabashedly anti-intellectual and gaslights the people with distorted data and an empty promise of prosperity. All of this is told through the perspective of Montag (Jordan), a young soldier in charge of burning books and hunting down anyone who reads them. He threads down a path that will make him question the motives behind his job and the authorities he works for.

From the very beginning, Montag’s arc is predictable if you’re familiar with Orwellian dystopian stories. This isn’t necessarily an issue, except that the eureka moment that leads him to change his mind isn’t really earned, since the film never takes a deep dive into where his heart is and the forces that make him tick. In fact, it’s difficult to get a clear sense of Montag as a character. He’s just… there. There’s not much going on in terms of personality and backstory, so he ends up coming off as a nondescript plot vessel.

Michael B. Jordan takes advantage of his movie star charisma and gravitas to add the emotional weight the script didn’t bother to include. Michael Shannon is stuck with a villain that wouldn’t be out of place in your average Jaume Collet-Serra-Liam Neeson collaboration. Just like Jordan, Shannon uses his particular qualities as a performer, in this case, his simultaneously intimidating and seductive screen presence, to create tension and curiosity. The chemistry between Jordan and Shannon conveys a twisted father-son dynamic that’s driven by power and a blind attachment to the rules. There’s also Sofia Boutella as an informer with a mysterious backstory for Montag to discover. It’s not a very meaty role either, and the fact that Boutella manages to shine on her own and generate spark with Jordan is a huge testament to her strength as an actress.

In this particular period in history, we could benefit from narratives that help us to understand the ways nations are tempted by authoritarianism and how they’re ultimately wrecked by it. Fahrenheit 451 has the proper tools for it in the details that define the setting in question. For instance, there’s a Fox News-type channel that reports the government’s transgressions as if they were victories; and the ideas Michael Shannon’s character recites aren’t all that different from the ones coming out of the current White House. At the end of the day however, the film doesn’t actually develop them into a discourse that says anything new or encourages the audience to come up with conclusions beyond “oppression sucks.” All the talk about thoughts, freedom and expression is lip service rather a than a genuine thematic point. The movie asks viewers to simply embrace this panorama as the imminent result of social chaos instead of taking some time to properly explain how the world got there in the first place. There’s some brief backstory for that, but it’s delivered in such a rushed fashion that it rings hollow and basically reads as the movie’s way of saying “don’t ask too many questions”. The fact that the plot ends up prioritizing an urgency-free MacGuffin chase over the anxieties it supposedly tackles makes things even more frustrating.

Ramin Bahrani’s direction is proficient and provides the film with handsome imagery and a nightmarish atmosphere. His key storytelling symbol is fire, and Bahrani uses it cleverly to evoke a wide array of emotions, like despair, fear, rage and melancholy. The contrast of fire and the night’s darkness is mesmerizing to look at and is a good reason why this world even feels slightly alive. You could say fire is a character in its own right, and that it works as an object where the movie projects its own progression, e.g., if a scene needs action, the fire’s destructive quality is the focus; but if the intention is to give room to breathe, the camera will fix on the characters to normalize the fire’s presence as a background element in their lives.

Fahrenheit 451 has enough visual panache and acting strength to make for a fairly entertaining watch, but its lack of bite in the commentary department squandered its potential to be a defining piece in the era of “alternative facts”.