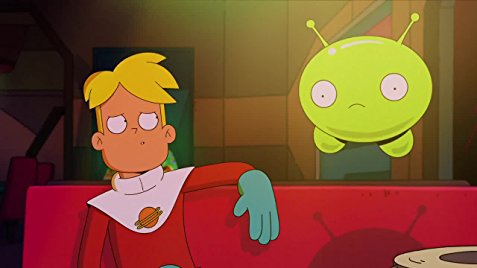 Final Space is a new animated sci-fi action-comedy television show airing on TBS. The show is created by Olan Rogers with showrunning conducted by David Sacks, whose writing and producing resume runs from The Simpsons to Malcolm in the Middle. It’s Executive Produced by Conan O’Brien with Animation Production from ShadowMachine and Jam Fill Ottawa.

The show, whose titillating trailer teased both fantastic looking and unexplainable sci-fi goodness as well as space opera, also features a head-scratching amount of banal humor. Going into the first two episodes was an exercise in discovering if a balance between these two aesthetic choices could be achieved. The result was less than stellar.

Final Space features a main character, Gary, voiced by creator Olan Rogers, who in the grand tradition of characters like Andy Dwyer, is essentially Too Dumb To Live. The problem with making this type of person the protagonist instead of an affable supporting character is that everything revolves around them. Their behavior, literally always at odds with whatever is happening around them, makes no sense in context. While this would work if the world they inhabited was as absurd as they were, or if anyone seemed to actually respond to the character instead of pretending they weren’t talking to themselves constantly, Final Space early on defines the rest of the world outside of Gary as being fairly serious.

Gary, then, exists as almost a meta-commentary on the happenings of the show itself, except that meta-commentary consists entirely of dumb jokes and poorly written one-liners. He is most reminiscent of Sterling Archer from Archer, but where that show succeeded (for a time) in its level of humor, Final Space falls flat. Ultimately the problem with characters like Gary and Archer are that they work in the short term as comedic foils, but in the long run, any sense of drama or stakes or character never feels authentic. They inevitably rob any moment of buoyancy or drama with some quip that sucks the energy out of a scene or fills it up with too much. Half of his lines are delivered in an aggressive, shouting voice that seems to indicate the actor coming from the school of thought that Louder Is Funnier.

There’s a part of the show in which this feels purposeful. We meet Gary at the end of a five-year long prison sentence (this is one of the show’s many fun and engaging sci-fi ideas, where prisoners, instead of residing in penitentiaries, are sent solo out to the far reaches of the galaxy to fix deep space satellites on AI controlled ships) and it would be easy to explain his erratic behavior as a consequence of his captivity and isolation. Except it isn’t. Because we also flashback to meeting Gary before he is arrested and he’s the same person we meet at the end of his incarceration.

Along with that flashback, we’re treated to the episodes being one long flashback to some unknown future date where Gary is slowly dying of oxygen deprivation while floating through the refuse of a giant battle. Besides being one of the most tired storytelling choices in media, starting this way, and having other flashbacks during the duration of the two 22 minute episodes, makes for a poorly paced pilot that feels unstructured.

I’m focusing on Gary because, compared to practically the entire rest of the show, he sticks out like a sore thumb. Which is why it’s so interesting that it is the show’s own creator who seems unable to reconcile his desire to write and portray Gary as a “lol this is teh random!” character with the clear level of love and detail worked into the rest of the universe. I can only ascribe this to Olan Rogers’ roots as a YouTube star, which has lead rise to a legion of roughshod if sometimes fascinating work from a series of young artists. You would have hoped that the presence of comedy stalwarts like O’Brien being on board would help give the show focus, but that doesn’t seem to be the case.1

The rest of the show mainly succeeds, even if it leans on many stalwart Sci-Fi tropes. The wry but monotone Ship’s Computer (voiced by excellent voice acting veteran Tom Kenny), the beleaguered but brilliant commanding officer (voiced by Tika Sumpter, not really given much to do in these first two episodes), and the animal-like buddy who becomes a friend after first trying to kill the lead (Coty Galloway, giving a great turn as the Cat Alien Avocato). Also featured is Living MacGuffin Mooncake, the little floating green fellow visible in all the marketing. Mooncake, also voiced by Rogers, is a delightful, gurgling, destructive little fellow. I liked him a lot when he was Nibbler, on Futurama. I would be remiss in not mentioning that David Tennant (!!) shows up as a sadistic-but-tiny Lord Commander who makes up for his small stature with enormous psycho-kinetic abilities that seem to get more or less powerful depending on what needs to happen in each scene.

The Lord Commander is trying to track down Mooncake after the little “planet killer” ends up with Gary by chance. Gary fends off bounty hunters that come to retrieve the green alien and ends up beginning a galaxy-hopping adventure to stop a rift in space-time from destroying everything. Meanwhile, Avocato, originally one of the bounty hunters sent to retrieve Mooncake, is also trying to rescue his son from the Lord Commander, who has had the boy imprisoned for three years before we meet him, and meanwhile, Captain Quinn (Sumpter) is on Earth solving a mystery relating to space ship crashes. There’s a lot of disparate narratives and backstory going on that don’t really fit together with the main story we’re presented with so far in the first two episodes.

On one level, this is fine. My least favorite thing about any sci-fi show is when it becomes overly concerned with explaining every detail of it’s universe to us. To the characters living in the world, it should just be the world. There’s no need to explain it. This is one of Final Space‘s strengths, as it never stops to explain to us how the warp drives work, or the story behind their version of the Galactic Federation or the Lord Commander’s evil empire. It would be an even greater strength if every moment with Gary didn’t feel interminable.

I will give credit to one scene which I think finds the right balance of Gary’s ineptitude and level of humor. When he and Avocato go to a planet to track down one of Avocato’s ex-allies, Gary is forced to put on a skin suit of a dead alien to fit in (humans, or “primates” are not welcome in many parts of the galaxy). Gary then happens upon the family of the alien’s skin he is inhabiting, which leads to a rather horrific but hilarious scene of the children accidentally tearing their mother’s old skin off of Gary’s body. Later on, when Gary and Avocato are escaping the planet, they end up on the windshield of the families car. “David! Kids! It’s me, your mother!” Gary cries desperately.

Final Space brings a large amount of potential to the table in it’s universe and supporting characters. It seems unlikely that the show will change too much too much going forward, though, as much of the impetus for the production comes from Rogers’ mind and his previous work (which consists largely of the loud, yelling, “random” style of humor evident in Gary’s character). Despite that potential, without a significant retooling of it’s lead the show may never find it’s proper footing.

RISE OF THE TOMB RAIDER: The Path to Agency Previous
THERE WAS AN IDEA... THE AVENGERS and Blockbuster Meta-Narrative Next