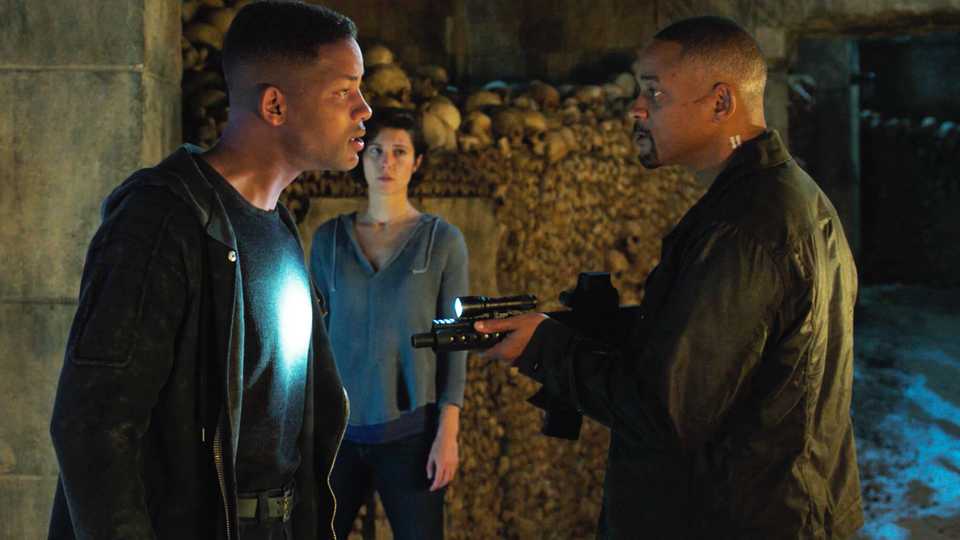 It’s a common perspective on life to say that aging means becoming a different person, your different experiences fundamentally changing you from one point in your life to the next. That’s nothing near an original sentiment, to be sure, but if we’re playing this game, there aren’t too many original sentiments. If we’re really playing this game, it’s true on a much more literal and practical level that aging doesn’t hide the fact that you’re the same person, no matter what else has changed.

These completely opposite, but equally reliable, pearls of wisdom go a long way towards describing the curious case of Gemini Man. It would be easy to say these questions are the film’s primary concerns, but it feels wrong to ascribe a single viewpoint to the movie. This is a work of art that’s taken a journey: The original script was sold in early 1997, in the golden age of the spec script – i.e. when screenwriters actually had a chance to make money. The concept of “An old hitman has to fight a younger clone of himself” was perhaps the Platonic ideal for this kind of market.

What happened next, though, showed why that golden age ended so quickly: The factors that make a movie viable to produce and successful with audiences have pretty much zero relation to an exciting pitch for a spec script. The technology required to make digital doubles wasn’t worth the time and money to develop as far as it would need to go, so in the meantime the script would be rewritten and re-rewritten; a laundry list of stars and directors would pass through contracts; and the plot, characters and themes would go through too many changes to attempt a full accounting.1

It’s oddly appropriate that the finished film arrives the product of twenty years of change — not necessarily growth or progress, but change nonetheless. So much about it is not exactly middling but noncommittal. Dialogue quirks get pushed hard for one scene, show up a few times later, then get forgotten about entirely. Thematic concerns enter and leave the movie’s philosophical focus like faces at a party. The characters are well-performed, but occupy strange, varying roles that switch in and out of archetypes and functions in the same way.

But that’s Gemini Man as it was, how it got here. Now, age has given way to something oddly fleeting. The reason it’s finally made it to the screen is that it’s essentially been converted into a test platform. Ang Lee, a director with a wonderfully eclectic career, shot the entire film in 120 frames per second, in addition to stereoscopic 3D and 4K. Lee is attempting to create a completely new dialect of cinematic language, one that sees a better reception than his earlier attempt at the same format, Billy Lynn’s Long Halftime Walk. The prototypically generic script might seem like an asset to Lee, after his first try involved telling such a complicated, difficult story with the new format – a high-concept crowd pleaser would give a director a lot more latitude to experiment.

In term of walking movies, it doesn’t exactly stand up to Hard or The Line or Fire With Me – not sure about The, though.

For me, watching in the complete 3D/4K/HFR format,2 the experiment was an unqualified success. Lee has always been a very behavioral director — not naturalistic, exactly, but meticulous and detailed, with an eye for the elements of normalcy most directors miss. From the first moments, it’s easy to see how all the extra fidelity adds to this filmmaking style in particular. There are so many contrivances of filmmaking that the format just strips away: It feels so palpable and lively that you notice things like how beautiful people can look under ideal lighting conditions, how elaborate sets can transport you, and how fast everything in movies happens compared to real life.

This works thematically, too. There’s a lot of depth in the concept of fighting an evil clone of yourself, one who’s been raised from birth to kill with no knowledge of their nature, but Lee is laser-focused on making it a story about age — giving up, living with your regrets, letting the world pass you by. The only reason that the original Will Smith meets the younger clone version3 is because he wants to retire, but he has too many regrets to let the past stay where it is. You feel an elderly person’s sense of the world, through the hyper-real format combined with the generic script: You’ve been around the block, already know everything that’s going to happen before it does, but you’ve never seen it happen this fast or vibrantly before.

That’s why a high-concept, low-IQ action movie works so well with the format. Will Smith plays the world’s greatest assassin and his evil clone, and when he’s punching himself or shooting at himself it’s uniquely pulse-pounding — your brain hasn’t had enough experience with the trick to not be fooled. Meanwhile, when he’s talking about his life’s regrets and confusion with Mary Elizabeth Winstead or Benedict Wong as his spy friends, it’s all played quite tenderly, which works well when your eye is being drawn to every single microexpression on everyone’s face. It’s not a new layer of emotion, but it’s conveyed in a way it hasn’t really been before.4

The direction in general would elevate the material, even in a normal format: It’s kind of strange whenever a fight scene starts up in this fairly generic action movie and you’re once again reminded that this is the Crouching Tiger guy. He’s at his best when the Will Smiths are trading punches or jousting with bikes or playing cat and mouse — this would be the main element of the movie to recommend to anyone who’s watching it more than a few weeks after the movie comes out.

The other point in this category would be Lee’s lighting and composition. He’s always taken a lot of inspiration from classical paintings, and he’s obviously aware that hyper-realism is a well-established style of art. He lights scenes in vibrant, natural colors, and lets movement like ripples on water or wind blowing through hair play out in a way that naturally draws the eye. If we want to talk specifics, I think he owes a lot to the Spanish hyper-realists — artists like Pedro Campos, Claudio Bravo and Antonio Guzmán Capel, who add an almost unnatural level of detail to their visions of everyday people and objects, that the colors only draw out.

Imagine this but with two Will Smiths in biker gear.

Not everything in the movie can work on all cylinders. The shadowy figures who cloned Will Smith are the real villains, and their section of the movie exists entirely in dry, plot-heavy conversation, which actually works against the format — it’s off-putting to see this kind of shoe-leather come across in such a detailed way, since it’s all about information rather than feeling. This is the other side of using such a conventional script for the unconventional format — when you have different standards, not all of the tried-and-true methods will work.

That’s one reason I don’t really believe this format is the future of cinema. The major one is that it’s just not worth it for any party involved — studios, filmmakers, technicians, audiences, theaters — but I also think the odd, halfway-dreamlike illusion of cinema is a magic all on its own. The movies have been around far longer than this hoary old script, and this isn’t the same kind of change as color or high resolution. Until then, though, Gemini Man is a brief spark of something special, something else. See it while you still can: you only live once, as the saying goes.