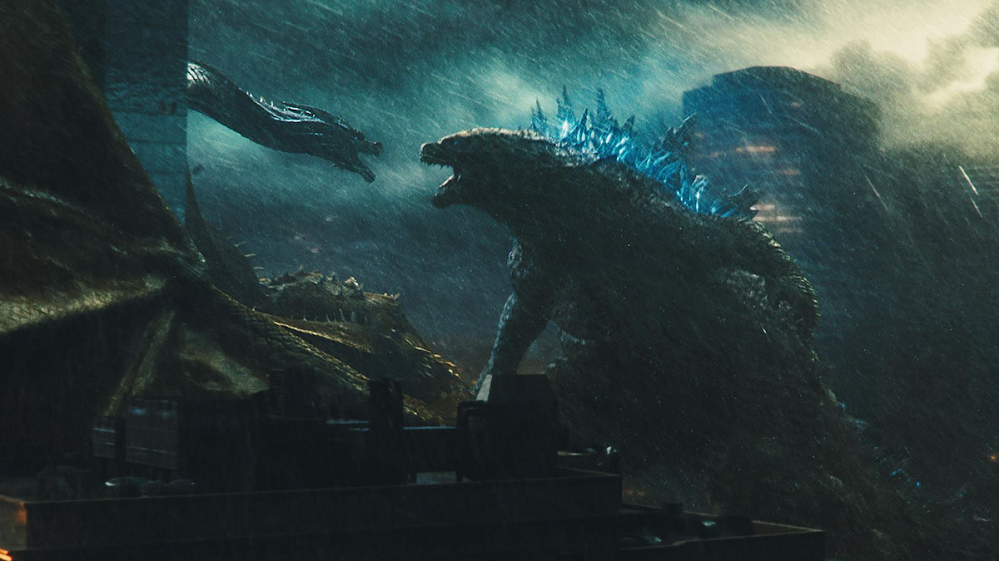 The following contains mild spoilers for the first third of Godzilla: King of the Monsters.

Godzilla is ubiquitous. He’s quite literally the King of the Monsters, in both name and reputation. But what is he to film (and film fans)?

An export of 1954 Japan, Godzilla was originally a meditation on the fallout of American nuclear aggression toward that nation from their perspective. And sure, throughout the years, the mostly-protagonist of the longest-running film series in history has returned from the depths to symbolize one existential peril or another. But let’s be very real; the primary legacy of Godzilla is that of a juiced-up, brawling nuke-lizard who vies for dominance over an ever-increasing gallery of pro wrestling cartoon monsters for the fate of the planet.1 It’s a series that has reinvented itself multiple times, and usually in pretty much the same way: You start with a more sober take, reintroducing Godzilla as some form of peril-totem in your first outing, and then quickly pivot to a monster mash or two in the immediate follow up entries. Most of the series is, in a word, silly. So why does the premise still resonate so deeply with global audiences? Well, probably because It’s a gargantuan, god-sized primordial dinosaur that spews atomic fire and represents the ultimate consequences of our desire to master the forces of nature through aggression. Also, it’s fun to watch giant monsters fight. I’m just guessing here.

Five years after the events of Gareth Edwards’ Godzilla, which reintroduced audiences to our newer, thiccer liege, Michael Dougherty’s Godzilla: King Of The Monsters bucks the established trend of the series in a very interesting way. Where Godzilla mainly used the premise of generational trauma and guilt as a way to let monsters punch each other, KOTM uses a story about mankind’s stewardship over Earth (with monster punching) to show the way we individually and collectively process grief (through making monsters punch each other). In the aftermath of Godzy’s march on San Francisco against the rogue parasitic MUTOs, a family has fallen apart. Mother and daughter Emma and Maddy Russell (Vera Farmiga and Millie Bobby Brown, both doing excellent work) live separated from Kyle Chandler’s recovering alcoholic patriarch, Mark.

Mark and Emma spent years trying to reckon with the death of their son Andrew, working with the elusive cryptozoological agency Monarch to catalog and contain the tide of globally emerging Titans, before ultimately giving in to their grief and going their separate ways. In the years since, Emma has continued her research into ways to potentially control the Titans, while Mark has recovered in solitude as a nature photographer. Both are still trying to understand the ways the world has changed around them, and have steadily slid into seemingly intractable positions on the role the Titans play in it.

While Emma is testing a prototype meant to control a newly-hatched larval Mothra, eco-terrorists led by Charles Dance’s Jonah Alan invade the research station and abduct both Emma and Maddy, killing the rest of the staff. Alan believes that the role of the Titans is to restore balance to Earth before Man can irrevocably spoil it. To tip the scales, he plans to release both the dreaded King Ghidorah and Rodan from their respective prisons, so that they can do what Titans do (squash us). This is where (and I know you’re about to laugh me out of the room), KOTM also attempts to tell a story about how we as a species use faith/belief/ideals to shape the world around us, with some factions using it as a motivator, and others using it as a cudgel. The Titans tend to have an unexpected side-effect in that the radiation they emit has a naturally renewing effect on the places that they squash, turning ruined cityscapes into lush and verdant paradises full of dead people. Amid all of this wanders our legendarily thunder-thighed star, Godzilla. When he isn’t napping on the ocean’s floor, he’s the living embodiment of the ways the Earth has changed in just 5 years. He’s viewed with terrible awe and deep distrust by the governments of the world. What brings this all home is the consequences our characters face each time they try to reorder the chaos of this world through violence. Spoiler (not really) alert: It doesn’t go so good.

Before you start to think I’ve gone completely off the deep end, know that all of this is simply a framework upon which to dole out some seriously satisfying Kaiju ass-kicking. King Of The Monsters aims to thread a particularly tricky needle: being an exceedingly modern version of the Japanese films produced in the span between 1984-1995.2 I consider most of the films released during  the Heisei Era to be just about the pinnacle of the 35 film series as a whole,3 in terms of both the execution of the tone they were going for, and the scale effects on display. Where KOTM really succeeds is in faithfully recreating the stakes, the connective tissue, and the self-aware fun of that particular span of entries in the franchise without sacrificing the emotional investment and tension needed to make this stuff register. I went on at length about the human and thematic setups and payoffs, but if I’m being honest, they likely won’t work on everyone. They are a means to an end, ultimately, and while I appreciate the effort put into making them cohere, their primary function is to deliver breathtaking bouts of fisticuffs between these stellar creature designs. This is where the divide between those who love this kind of stuff and those who scratch their head at it, is likely going to deepen.

There are moments of unbridled spectacle and scale that visually reference some of the high-points of the series, that also absolutely go for the kind of pseudoscience nonsense that tells you it’s okay to cut loose and cheer on the stomping. This is a movie where characters make enthusiastic references to things that happened in the last film, because they know you enjoy hearing the phrase “Let them fight.” It’s a movie where you can hop in a submarine, and travel through a vortex because the Earth is built on a series of fast-travel tunnels. It’s also a movie that dynamically cuts between Atlantis and Fenway Park like that’s just a thing that someone would think to do. KOTM visually references Disney’s Hercules and The Lion King and stares you directly in the face, daring you to object.

What’s exciting about KOTM is that barring some mid-film tussles that get a little visually muddy, and a sound mix that somewhat buries an incredible score by Bear McCreary, this is a movie that enthusiastically embraces being a Godzilla movie. I’m less than thrilled at the death of one of our series main characters, but I kept thinking about the ways some of our other protagonists’ stories fit together after the fact, which is more than I can say for the vast majority of films in this franchise.

Dougherty and his team have both paid homage to decades of trash classics, and unloaded some truly audacious and imaginative visual spectacle. They’ve also managed to embrace the visual language of the series not only faithfully, but reverentially. There are many frames in this movie that you could hang on a wall, and only be slightly embarrassed about. Similarly, there are shot transitions that drive home the differences in scale in fist-pumpingly cool ways. The clashes with Rodan is the best this series has ever done with that character. Mothra is a cinematic wonder to behold.4 The way the film coordinates events to create a scene where the Navy and the Air Force provide support on Godzy’s final run at Ghidorah is the reason we even watch movies in the first place. While I’m not certain a movie like this is quite universal enough in its faithful representation of a niche genre to connect with everyone, I’m absolutely sure it made this old Godzilla fan’s heart scream nuclear fire.