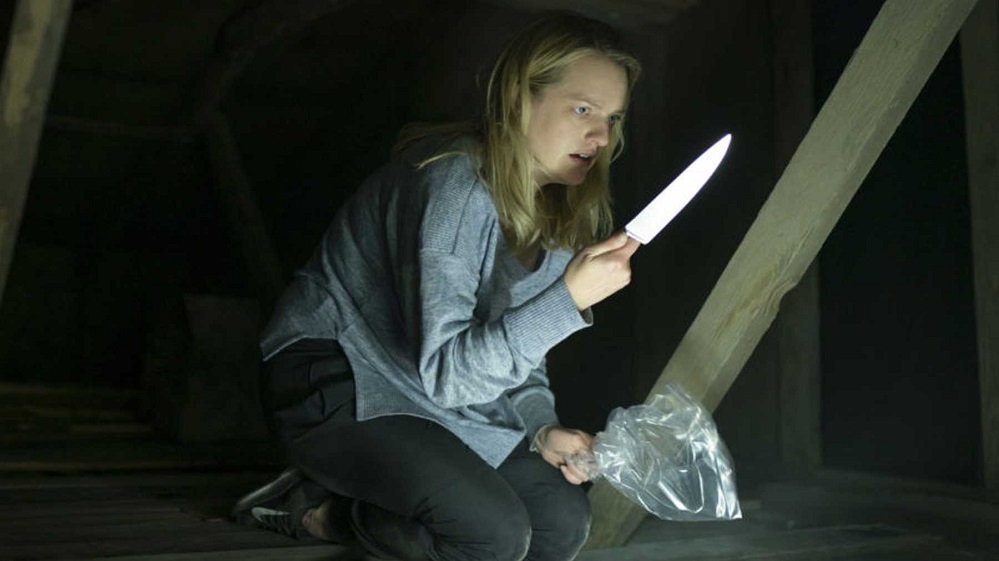 It’s about damn time that we got a good modern film utilizing the classic Universal Monsters. After farting around with The Wolfman and falling flat on their face in multiple attempts to resurrect the original Cinematic Universe as an action franchise with 2014’s Dracula Untold and 2017’s The Mummy, it looks like Universal, by way of Blumhouse, has finally figured it out. The Invisible Man takes H.G. Wells’ novella and James Whale’s 1933 film and updates it for the modern age, turning it into a deep dive into the horror of domestic abuse.

Leigh Whannell’s modern adaptation of the story opens with an Cecilia (Elisabeth Moss) sneaking out of a beachside mansion, having drugged her physically and emotionally abusive husband, in an incredibly tense set-piece. She flees with her Sister (Harriet Dyer) and goes into hiding with her police detective friend and his teenage daughter (Aldis Hodge1 and Storm Reid, respectively). Weeks later, Cecilia’s husband, Adrian (Oliver Jackson-Cohen), commits suicide and leaves a $5 million trust for her, the payments of which are overseen by his brother (Michael Dorman). As you can guess based on the title, Adrian’s suicide was a ruse and his advanced research in optics has led him to discover the ability to appear invisible and uses this newfound technology to haunt Cecilia from “beyond the grave” so to speak. Cecilia’s mental health slowly deteriorates as Adrian incessantly torments her and everyone around her refuses to believe her belief that he’s alive and invisible.

THE INVISIBLE MAN is the best PREDATOR movie since 1987

The Invisible Man relies heavily on Moss’s commanding performance in the central role. Whannell’s screenplay and visual direction are top-notch—I’ll get to that later—but the film falls apart without Moss absolutely bringing it as the lead. Moss has established herself as one of the best in the industry over the past decade, between her TV work in Mad Men and The Handmaid’s Tale alongside her recent filmography which includes Her Smell, Us, and The Square. Moss is slowly unravelling moment to moment, and her fear of sights unseen is palpable—she spends most of the film acting in empty rooms as if she’s not alone. Her performance is so thoroughly unhinged that, even though you know that a film called The Invisible Man features a man who is invisible, you question whether it’s all in Cecilia’s head and if she’s losing her mind.

Which helps hammer home what Whannell’s script’s whole thematic thrust is about. There’s zero pretension that this isn’t a pointedly topical film about domestic violence and how women’s fears, both of domineering men in their lives and just simply of their surroundings, are ignored, trivialized or even stigmatized. Women are taught from an early age to be in constant awareness of their environment, lest a random dude cause them harm… and yet when harm does come we don’t believe them. That’s The Invisible Man in a nutshell. It isn’t lazy posturing either; the horror genre is littered with films pretending they’ve got feminist bonafides, but having a woman protagonist who doesn’t die at the end isn’t the same thing as rooting the entirety of a film, from the tone to the actual scares, in a well thought-out and expounded-on woman-centric thesis. Whannell’s screenplay ensures that the true focus on the film is the effect Adrian’s past abuse has had on Cecilia and the effect his “less visible” violence is having on her in the present.

Which is a little surprising given Whannell’s previous film, Upgrade, wasn’t nearly as thoughtful about its premise and wound up being downright offensive, and the rest of his work as a writer has ranged from pretty decent (Insidious, Saw) to pretty bad (the first few Saw sequels, the Insidious sequels, the obnoxious single-joke “comedy” Cooties). This is far and away his most complete screenplay. Start-to-finish, it’s clever, introspective, and handles difficult subject matter with just enough shades of grey that it doesn’t become overly simplistic and preachy. The film concludes on a perfect note that manages to achieve catharsis while underlying the finale’s moral ambiguity. It’s perfectly composed.

What Upgrade did have was some moments of strong direction, which Whannell continues to build upon with The Invisible Man. He uses his camera placement and movement in unexpected ways. He uses camera panning to shift the audience’s focus away from the “action,” often turning us towards an empty2 hallway. He’ll focus the camera on a handful of objects for an extended period of time, teasing the audience to expect some Paranormal Activity slight shifts to indicate a spooky presence—but Whannell doesn’t release the tension that easily. When the titular invisible man makes his presence known, it’s not shifting a book slightly—he makes his presence known. As for fans of Whannell’s action-oriented camera trickery from Upgrade, you will not be disappointed by the film’s third act, which features some thrilling uses of similar movement, particularly for an extended sequence of Invisible-Man-on-Security-Guard violence.

Whannell, Moss and co. really nail this one. And thank God too, because maybe this means Universal will finally realize that they should make horror, or at least mostly-horror films out of their classic roster of freaks. It’s almost like the Universal Monsters are iconic for a reason and you shouldn’t try and make a film where Tom Cruise fights a glow-y eyed Russell Crowe and call it The Mummy. Bringing at least one of these villains back to its roots as something that actually inspires terror, in a film with real-deal “things on its mind” no less, is enough to make The Invisible Man a must see.3

James Mangold in Talks to Direct INDIANA JONES 5, Which... Previous
Off the Beaten Path: DEATH TO SMOOCHY Next