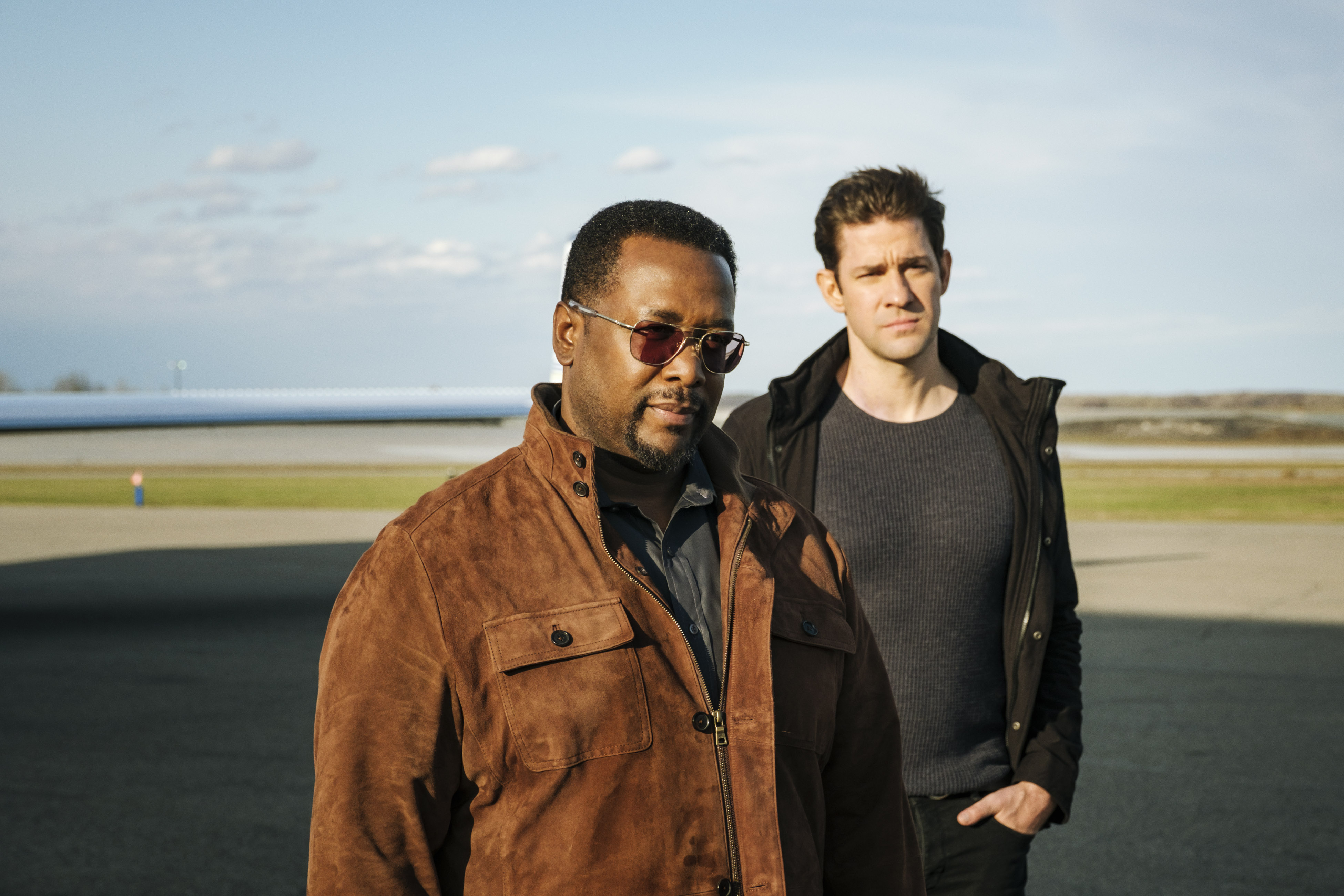 Episode 2 of Jack Ryan, “French Connection,” picks up approximately two days after the siege at the Cobalt black site in Yemen. Jack and Greer have returned to Langley wounded but having gained ground now that they realize they had the mysterious Suleiman in custody. They continue their investigation into Suleiman, finding through a phone he left at Cobalt that that there may be an impending attack in Paris and that Suleiman needs to move the funds the CIA froze back to Syria. Meanwhile, Suleiman returns home to his family as he executes the next phase of his plan.

Besides continuing to develop Jack and Greer as burgeoning partners, “French Connection” gives everyone a bit more character backstory. We find out that Greer – unlike past iterations of the character in the movie adaptations – is Muslim. He’s struggling with seeing his faith in a new light after separating from his wife, who was a catalyst in his conversion in the first place. The scene in which it is revealed that Greer is a Muslim doesn’t come with any kind of game-changing information or any kind of gotcha. It’s personal. It is simply Greer and a friend from his mosque chatting about their shared faith and lamenting a failed relationship that has affected that faith. The information is presented with such normalcy that it seems profound – and that says a lot about how really screwed up it is that American media doesn’t typically do this.

Matice (John Hoogenakker) also makes a welcome return, joining Jack and Greer in Paris. There’s a brief moment of levity as Matice hands Jack a gun, not knowing the latter man’s background, and proceeds to school him on how to use it. Wendell Pierce’s face as he watches these two banter says exactly what we need to know about how Greer sees these two together, and I hope we get a lot more Jack and Matice buddy adventures soon.

We also see Jack and Cathy having another meet cute. When Jack goes to the hospital to get help for his chronic back pain, he stops by the epidemiology department to say hello to Cathy. What struck me about this scene is that his purpose was to ask her to dinner, but also to apologize for having to leave their conversation because he had to get on a helicopter. The guy encounters a situation he had no control over and apologizes for it! This, to me, is Jack Ryan in a nutshell. This is who he is as a person. He’s earnest, good, and sincere, even when a situation is completely out of his control.

Not to be dismissed, Cathy also gets character development! Dr. Mueller isn’t just a doctor; she’s an incredible doctor. When Jack googles Cathy, he realizes just how impressive she is, and we as viewers realize that she is someone our well-dressed “State Department supply chain logistician” will have to work three times as hard to impress. So many times, shows depict these kinds of blooming relationships as being about how the hero always gets the girl and it’s just a given. Here, there’s a real chance that she’s going to find him unimpressive, given that she thinks he’s a mild-mannered logistician, a persona he emphasizes to keep his cover story intact. It’s an interesting dynamic that doesn’t exist in the books, and I’m glad the writers went in this direction. It gives Cathy far more characterization and reframes their potential relationship as being one of push and pull and not just of inevitability.

On the other side of the world, Suleiman’s reunion with his brother, Ali, is short lived. He’s sending Ali to France, and in their brief scenes together we see how deep their bond is, forged by trauma. When Suleiman goes home we see that he is a family man, husband to Hanin (Dina Shihabi) and a gentle father to kids Samir, Rama, and Sara. Here, the audience takes on Hanin’s perspective to show us how Suleiman has changed in her eyes. Dina Shihabi has a really difficult role on this show; so far, her storyline is primarily about reacting to what’s going on around her. She knows both more and less than the audience, contrasting her husband’s campaigns against Assad with what she now sees as a different tenor to his work and the threat that his new compatriots pose to her family. Shihabi has to react and inform while letting the emotion of what she’s experiencing play across her face. She also has to establish Hanin as a formidable presence, not merely a wife on the periphery of the story but someone with smarts and skills. If Suleiman will do whatever it takes to hurt democracy, Hanin is going to do whatever it takes to keep her family away from the consequences of his actions.

There are other, more subtle things I really enjoy about this episode. The first is that there’s political subtext at play, where Nate Singer (Timothy Hutton) continues to punish Greer for his actions in Karachi, so far unexplained but clearly of enough significance that he was demoted. Not only does Singer set up a task force and give the plum assignment to another division even though Greer’s the one who found Suleiman, Singer attempts to poach Ryan from Greer, telling him that Greer’s not the guy he should hitch his wagon to. Jack’s all too aware that he’s a pawn in this pissing contest. You just know when you’re being used, and the fact that Jack and Greer aren’t really partners or even good colleagues is beside the point – you don’t show loyalty to someone who clearly isn’t showing loyalty themselves. They are snakes in the grass, and Jack goes with his gut, which says to stick with the man who has stuck by him. It’s a nice addition to Jack as a character.

A notable theme is the fact that there are setbacks. The heroes don’t always win. Counterterrorism is messy and complicated, and not only are you missing pieces of the puzzle, the pieces you do have continually change shape based on context, new information, or just plain uncertainty. It’s hard to emphasize just how difficult it is to always know what to do when you know you don’t have a complete picture, nevermind in the moment, like when Jack is chasing Ali and has to decide whether to shoot, knowing he could hit an innocent person. Life is full of setbacks and irreversible decisions. In the Jack Ryan universe, those decisions loom large and the stakes are high but the show affirms that it’s not about the decision itself, but about the value of being careful, thinking clearly, and using your smarts. The entire ethos of Jack Ryan throughout the books, movies, and this show is that Jack doesn’t change for a morally dark world. His steadfast commitment to doing good is what helps bend the world back toward the side of the angels, little by little.