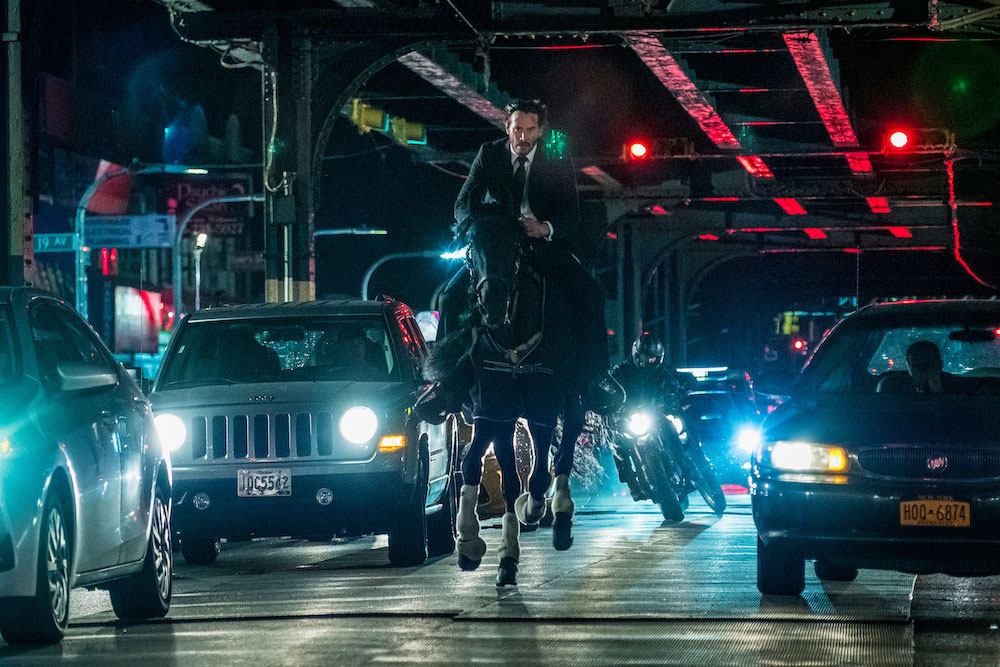 When the first John Wick came out five years ago it was the picturesque definition of cinematic lightning in a bottle. It was a brutal action flick from a couple of unknown directors starring an actor whose star had lost a bit of its luster and who had been the butt of “bad acting” jokes for decades. Chad Stahelski and David Leitch’s first film was just a balls-to-the-wall straightforward shoot-em-up that completely changed the game for American action. It seemed impossible to recapture that magic, but the film’s sequel managed to, for many, be even better as it expanded the first film’s universe while keeping the jaw dropping action flowing.

John Wick: Chapter 3 – Parabellum is somehow better than either of its predecessors.

Taking place immediately where the Chapter 2 left off, Chapter 3 kicks off with John trying to escape New York City having broken one of The High Table’s cardinal rules. With a $14 million bounty on his head and a ticking clock before he is officially “ex comunicado,” he fights his way through the city using horses, library books, and all manner of other weapons to get out. His path takes him out of the city and eventually to Africa as he seeks “the one above the table” who can help him survive. Meanwhile, Winston and The Bowery King are investigated by The Adjudicator, the judge and jury of The High Table, for their assistance they provided to John in the previous film.

Parabellum almost feels like an amalgam of the series thus far. The first act as John escapes and kills assassins feels like a return to the more simple, clear cut plotting of John Wick. The transition into and remaining parts of the second act similarly feel at home with the mythology expansion of Chapter Two, as it introduces Sultan-eque Elders, Russian ballet instructors who also serve as High Table members, and Continental Hotels across the globe. By the time the film gets to its climax, the two storytelling approaches have completely blended together seamlessly as John fights The High Table’s heavily armed police-like forces.

Just look at this. I could watch this on a loop for days

And that climax hammers home the film’s real thematic weight: consequences. So much of the film is focused on the direct and indirect consequences of characters actions and the toll it takes. John practically spends the whole film trying to undo the previous two films and it only leads him down even worse rabbit holes. Winston and The Bowery King are forced to reckon with the fact that they serve a master they betrayed. There are no clean getaways, indeed.

The series has certainly never looked this good. Stahelski, returning again as sole director, and cinematographer Dan Lausten have crafted such an insanely beautiful look for this film. Each action scene has not only its own intense choreography, but a wholly unique look that makes the relentless violence never come off as boring or repetitive. The aforementioned choreography has similarly never been better, with each beat offering dozens of gunshots but imparting oceans of character to the cast.

Who are all incredible, by the way. Obviously Keanu Reeves is the big name central star and his commitment to stunt work and weapons training are evident in every scene. No one has ever questioned Keanu as Wick for a reason: he sells the hell out of each gunshot. Halle Berry similarly puts in work as Sofia, a former colleague of Wick’s who owes him a blood debt. She’s basically female John Wick with a pair of Belgian Malinois who rip dudes’ dicks off and murder people like they’re velociraptors in the Jurassic Park series. Berry, similar to Reeves was when the first film hit, has been kind of the butt of jokes for the past few decades and has never starred in an action film that actually lived up to her abilities as a performer… at least until now. Berry is Reeves equal in terms of commitment to the craft in this film, and the pair’s big team-up shootout in the second act is one of the film’s highlights.

But where Parabellum really shines is in the villain department. Mark Dacascos, of Iron Chef America fame, is absolutely pitch perfect as Zero, a sushi chef who moonlights as one of the world’s deadliest assassins, specializes in blades, and has an almost fanboy-ish crush on John. He’s hired by The Adjudicator, played with steely resolve by Asia Kate Dillon, to carry out The High Table’s will against Winston, The Bowery King, and John. Zero’s prime henchmen are Yayan Ruhian and Cecep Arif Rahman of The Raid series and they’re stellar at giving John a run for his money, including one of the film’s best (and funniest) scenes involving a seemingly unlimited number of glass windows and display cases. Not to mention the film’s first henchmen we get is 7’6″ NBA Star Boban Marjanović, playing a hitman named “Ernest” who is introduced reading classic literature in its native tongue.

Either you’re in or you’re out with this series at this point. But if you’ve found anything to love in the previous two entries, John Wick: Chapter 3 – Parabellum is going to be right up your alley. The action is as intense, visceral, and inventive as ever. The universe continues to be fascinating and unlike anything else in the genre. But most of all, it’s a hell of a roller coaster ride that will satisfy your every headshot-craving desire.

BARRY Recap: Past = Present x Future Over Yesterday Previous
THE NATIONAL BOARD WITH A NAIL IN IT Special Report:... Next