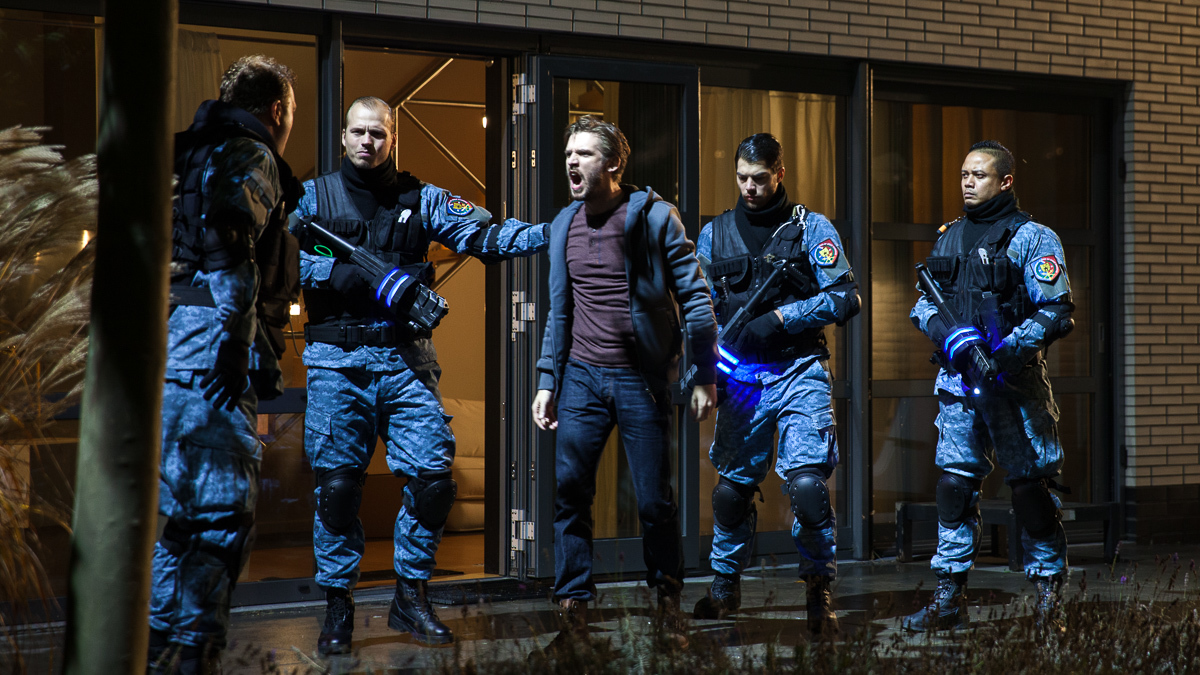 Dan Stevens is one of our most fascinating actors working today. In the same year, he has appeared in a musical adaptation that became one of the highest grossing films of all time (Beauty and the Beast), a film that spits in the eye of and deconstructs toxic masculinity (Colossal), and a television show about one of Marvel Comic’s weirdest mutants (Legion).

The Downton Abbey alum has been spreading his wings since leaving the cushy early 20th century life he knew as Matthew Crawley. Unlike perhaps your typical Hollywood leading-actor on the rise, Stevens hasn’t been afraid to work on movies that don’t appear to move his his career in any particular direction. It’s actually a fairly admirable choice in an industry where publicists and agents work hard to craft iron clad “images” for actors that almost always seem to end up stymieing them creatively at best and rendering them pariahs to the public at worst (see: the finely honed Star Personas of Chris Pratt and Jennifer Lawrence). Stevens is a working actor, and he’s happy to work. The same year he appeared in the exemplary The Guest he was also in an Adam Sandler joint, for goodness sake (The Cobbler, if you don’t remember).

And now there is Kill Switch.

Kill Switch is the sort of benignly bad movie that could only come from the mind of people who are untrained in storytelling or even film-making beyond a basic degree. The brainchild of Visual Effects Designer Tim Smit, the movie is basically artless beyond the intricate and loving detail bestowed upon floating attack drones, giant gravity-based wormholes in the sky, or the Heads-Up Display that makes up a good portion of our viewing experience for the movie.

It would be easy to go on in detail about the film’s many faults (the script is rough at best, with even Stevens struggling to sell all the beats he’s given, and there is some of the roughest shot/reverse-shot work I’ve ever seen), but that honestly would feel a little unfair. This was a stalwart but ultimately amateur attempt that I feel like applauding just for the gumption it took to make. I don’t mean that sarcastically at all, either. A film made with this kind of lack of ability but on this level could only be a labor of love from a large group of dedicated people. And that’s something I can respect, no matter what.

Something that Kill Switch can actually do well, though, is serve as a perfect example of how banal most video game stories are, and how adapting them as movies is a losing battle. Rendered a spectator in a story involving a MacGuffin, sci-fi guns, and a timer, it’s sad to see how boring the basic narrative of your average 21st century first person shooter can be. While the aesthetic of the movie calls to mind Half Life 2 the most, you could substitute and play any game of its like and you would know the beats of Kill Switch (although you would then miss out on Dan Stevens shouting and cursing as he blunders from one small-scale set piece to the next).

At the end of the day, the filmmakers wanted to make a movie based on some fancy FX ideas they were interested in putting to use. Half of the movie takes place in first-person (calling to mind Hardcore Henry, and likely built upon making use of the technology created to make that movie possible) and although this is every once in a while interesting (Stevens’ HUD likes to remind him whenever he gets a concussion, which is often), like most POV films, it quickly loses its luster. It’s not a particularly toxic or dumb movie, like some recent fare, it just merely exists. An excuse for an exercise in FX wizardry for the director and his team, where they let their passion for wanting to make a movie override their lack of knowledge for the other vital pieces of film-making.

The Bus Stops Here: The Pixar Top Five Previous
"Curve" is a Nightmare Caught on Film Next

We're 20 columns in, and this might be the best one yet!