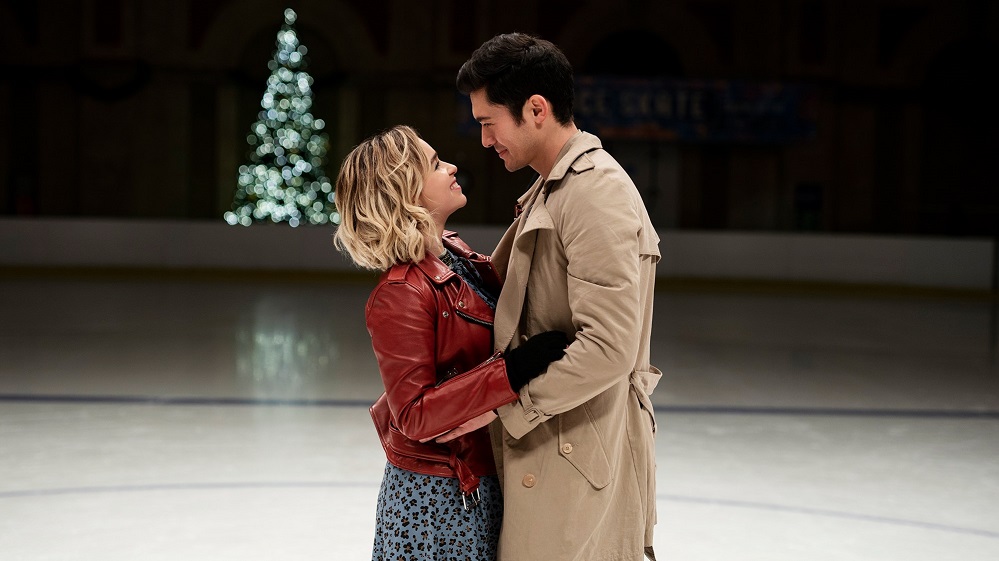 It’s the first week of November, so you know what that means: It’s Christmas Time. Which means it’s also time for some cute, middlebrow romantic comedies starring attractive 30-somethings that are varying degrees of Christmas-adjacent. This year gives us a much more directly yule-inspired version of this with Last Christmas, directed by Paul Feig, (somehow) written by Oscar-winner Emma Thompson and playwright Bryony Kimmings, and starring Emilia Clarke and Henry Golding. It’s… fairly delightful, even if there’s some baffling digressions and a twist that does its best to throw a wet blanket on the whole endeavor.

Clarke stars as Kate (birth name Katarina), a young woman couch hopping, one-night-standing and binge drinking. She’s estranged from her family, her parents a pair of Yugoslavian refugees/immigrants and her closeted attorney sister due to her behavior and failure to live up to expectations. She wants to be a singer and an actress, but in the meantime she works at the world’s most garish and intense Christmas store owned by a Chinese woman who goes by Santa and who kind of hates her. Outside her store one day, she meets Tom (Golding), who charms her almost immediately, leading to a series of dates and advice that gets her life on track. Tom, though handsome and intelligent, is flakey and doesn’t carry a phone, leaving Kate feeling abandoned when he repeatedly doesn’t show up in her life when she needs him. Along the way she learns about the spirit of giving and the importance of family and all that mushy-gushy, Christmas-y jazz.

Last Christmas is, to put it in simple terms, a giant, gooey piece of cheese. It’s a gentle film thats sole desire is to give you the warm and fuzzies. On that level, it mostly delivers. Golding and Clarke are so overwhelmingly enchanting and the film is so breezy that it’s almost impossible to not just sit back and smile. They’ve got plenty of chemistry, which is what really drives the whole film.

It might sound a little facile and like backhanded praise, but it’s genuine. There’s such an easygoing lightheartedness to the whole film that’s infectious. There’s really not that much more to it. Even the film’s big “earth shattering” twist — which if you have seen, like, one and a half of these kinda films and are smarter than your average bear you will figure out by the end of the first act — isn’t enough to bring the whole enterprise down. Instead it just feels like a speed bump in an otherwise smooth ride.

If it feels a bit like I’m talking in circles — which I kind of am — it’s because there’s not a whole lot to write about. You either buy into this sugary, unrealistic, marshmallow fluff1 universe or you don’t. This is, for all intents and purposes, a Hallmark movie2 with a budget and actual huge names behind it, for both good and ill. It’s extremely airy and it never lingers on the bad moments. It never really lingers on anything to be honest. It hits the beats it knows you want and moves on.

It does get a little odd, though, when you think about Last Christmas for more than a few seconds. There are brief moments where it gets really dark, yet it still can’t help but just glide over it all without skipping a beat so it doesn’t really land in the moment. There’s like two minutes where it becomes about xenophobia and Brexit out of nowhere and then that angle gets dropped almost immediately. Kate’s backstory involves genocide in Yugoslavia and nearly dying of heart failure leading to a transplant. But, as is necessary in a film like this, those moments are fleeting and within a few minutes we’re back to the pleasantness.

It never gets grating, though, even if those strange undercurrents of darkness don’t align with the jovial nature of the rest of the film. It’s not painful to watch or overly ham-fisted, but rather just the right amount of sentimentality and adorableness. Last Christmas is a weird movie — I cannot emphasize enough how dumb the twist is and the “based on the song” credit for George Michael winds up being unintentionally hilarious when you put it together — but one that gets by on the appeal of its cast and the overall cheerfulness of its aura. There are much worse ways to spend a few hours.