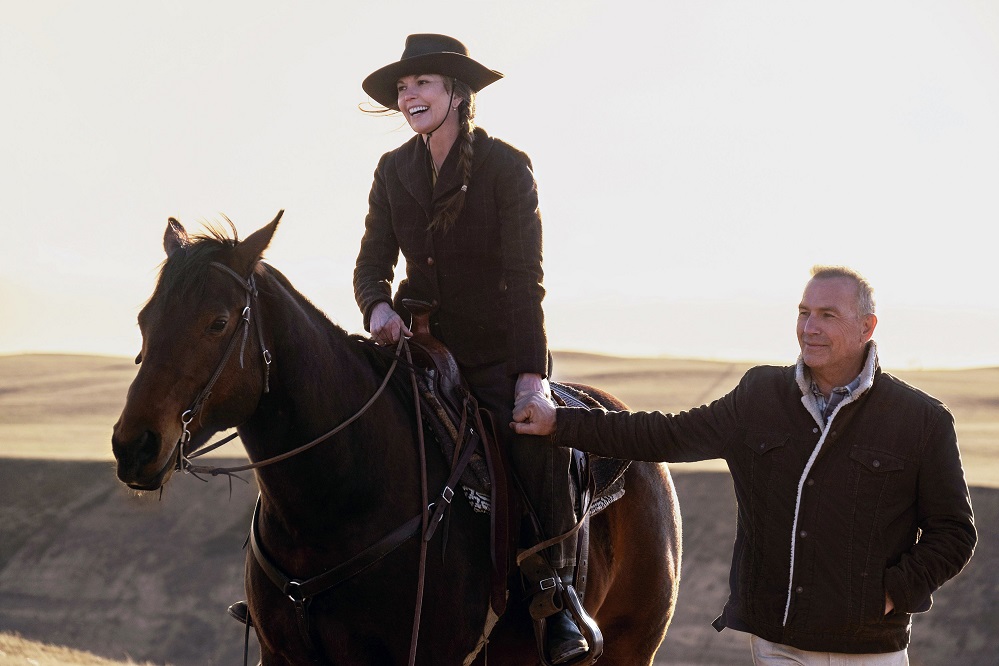 In my lifetime, no one has been a larger symbol of Americana than Kevin Costner. Whether it be baseball, the Western, or just depicting an everyman trying to get by in the world, it’s almost shorthand to cast Costner in the role. He’s practically a sentient slice of cinematic apple pie at this point. Let Him Go leans heavily into that, giving him the classic role as a retired sheriff of a bucolic, untamed land. Yet this time around his weary, yet ideal middle-America, morally straight, average joe serves as a sidekick to Diane Lane, who runs the show — A clever twist on what is a very heavy western-riff of a film and our preconceived notions of the profile of these two actors.

Set in the pastoral landscapes of the Dakotas, Let Him Go concerns a distraught family recovering from immense tragedy. Margaret and George Blackledge (Lane and Costner, respectively) first suffer through the loss of their son, who leaves behind a wife and baby. Years later, their son’s widow marries a physically and emotionally abusive man, and the pair abruptly leave town with the Blackledges’ grandson to live with the man’s family, a notorious group of off-grid North Dakotans: The Weboys. The Blackledges venture out to ensure that their grandson and daughter-in-law are being cared for properly, and find that the Weboy clan are a brutal household that delights in violence and psychological abuse.

The draw here is Lane and Costner, who are about as strong a duo as you could have hoped for in a film like this. They’ve got palpable chemistry and their heroic intentions are never in doubt, even as they convey immense heartache and melancholy for their current and past situations. Lane in particular stands out, as her Margaret is the film’s driving force, struggling with a righteous anger that propels the film forward. She’s the true star of Let Him Go, and Costner merely her somewhat reluctant, but unflinchingly loyal partner. It really shows the failing of the DC Superman films that these two actors were cast as the Kents and yet they were mostly memorable for Pa Kent’s weird monologues about dead horses and hero cakes.

Leslie Manville, on the other hand, is about as far from an internal, somber performance as possible. She’s going for outright scenery chewing villain work here as the matriarch of the Weboy family. It’s a fun performance as she reveals herself to be the misanthropic, evil heart of a monstrous family. Jeffrey Donovan is also a member of this sadistic bunch, though he’s mostly memorable for his weird haircut and a wardrobe that consists solely of white tank tops. Where Costner and Lane depict the idealized heartland ranchers, Manville and the rest of the Weboys are basically a few generations away from being the Sawyers in The Texas Chainsaw Massacre. It’s not restrained by any means, but it provides a fun group of villains for the central pairing to go up against.

Bezucha’s direction isn’t going to light the world on fire, but it’s solid journeyman work that never interferes with the film’s thrust. We get plenty of beautiful scenery of the Dakotas, but he knows that the best course of action for the film is to let the stars take the reins and not let flashy direction get in their way. What was surprising to me was how solid the script was, given my main experience with Bezucha is The Guernsey Literary and Potato Peel Pie Society, a film that I absolutely loathed with every fiber of my being, which he penned. Here, he is able to fill the film with dialogue that feels authentic to the film’s rural Dakota setting while providing dimensions to the characters overarching sadness and pain. So much of the film is building to a foregone conclusion of a climax, but there’s enough incident littered throughout that it still feels propulsive even as we spend most of our time wandering around the plains and conversing in diners with Costner and Lane.

I’m still not sure if Let Him Go was the best or worst possible film to watch prior to the (still ongoing) 2020 election. On the one hand, it’s a story of brave, heroic small town folks taking righteous vengeance on those they don’t like. On the other, it’s a film about Kevin Costner and Diane Lane taking righteous vengeance on a family of insane yokels that border on Deliverance-levels of depravity. Maybe that makes me a bad person for finding catharsis in that, but then again I’ve spent the past few weeks watching cars with “F*ck Your Feelings” flags waving in proud fashion on F150s, so I apologize for my crassness. Regardless, Let Him Go is a really well made film that slowly burns, and the characters and performances are so engaging that you don’t mind waiting for that inevitable explosive finale.

LOVECRAFT COUNTRY Episode 10: “Full Circle” Previous
Off The Beaten Path: WE ARE YOUR FRIENDS Next