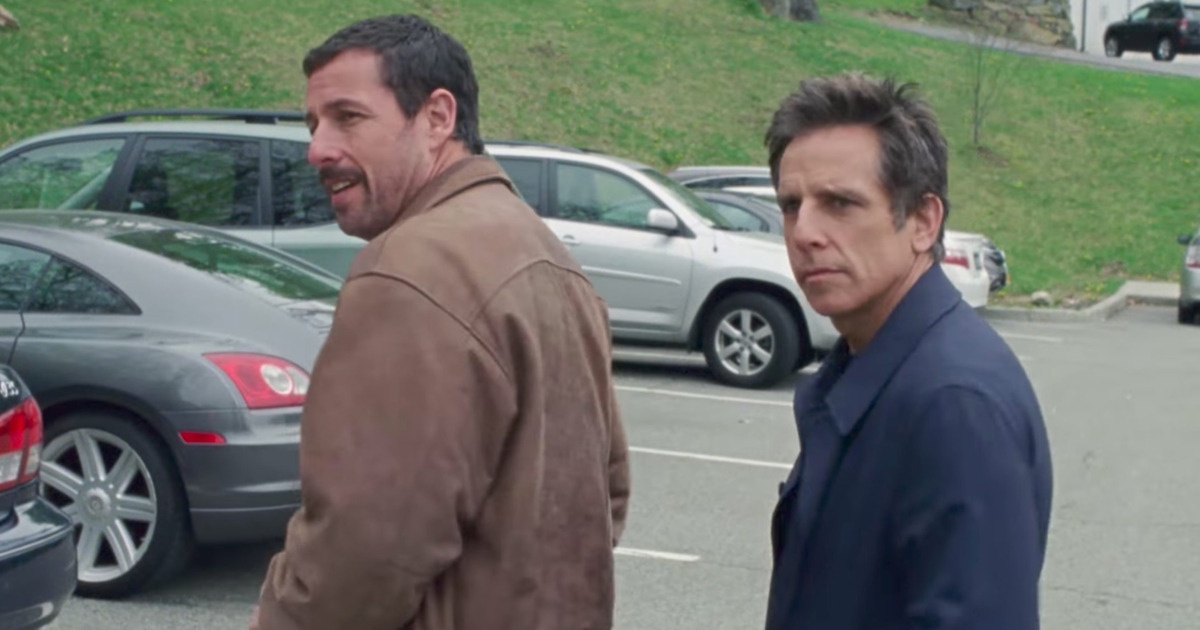 By all accounts, The Meyerowitz Stories shouldn’t work.  Noah Baumbach is a director who hasn’t had anything new or interesting to say since 2005’s The Squid and The Whale.  It would be charitable to say that Adam Sandler and Ben Stiller haven’t done worthwhile work since the turn of the decade; Tropic Thunder and Funny People being the closest thing to “good” that either could claim over the past ten years, and even those are pushing the limit.  And Dustin Hoffman’s live action career hasn’t seen a good, let alone great, performance since before I was born.  Yet somehow The Meyerowitz Stories manages to not only be an funny, entertaining and genuinely good film, but one that’s deeply authentic and stirringly poignant.

The Meyerowitz Stories centers around a New York family coping with both the sins of the past and the old age and retirement of patriarch Harold.  Harold is an ornery, womanizing former-professor and sculptor who is resentful that he never achieved the level of fame he believes he deserves.  His children, Danny, Jean, and Matthew (who is Danny and Jean’s half-brother), are brought together by an art gallery that will feature Harold’s work, though he is bitter that he will not be the only artist on display.  This coming together of kin leads to each examining their relationships with each other, their successes and failures in their personal, parental, and professional lives, as well as their father’s oversized and overwhelmingly negative impact on all of their lives.

If this sounds like the most Baumbach movie ever, you’d pretty much be right — on paper it sounds like a parody of something he would make.  Much like The Squid and The Whale, Greenberg, While We’re Young, and pretty much every other film he’s made, The Meyerowitz Stories entirely centers around the struggles of artists as well as difficult family dynamics, particularly those of a larger than life father or father figure.  And while the subject matter is strikingly similar to Baumbach’s other works, it’s the tone here that is wildly different.  Where The Squid and The Whale worked as a condemnation, The Meyerowitz Stories is a kind, warm embrace.  The film is much softer and affectionate than previous films in the Baumbach daddy-issues canon.

Much of this warmth comes from the films five leads.  Dustin Hoffman isn’t given much to do as the cantankerous family patriarch and he’s much more of a trope than a character, but Hoffman makes the part sing, melding the disgruntled personality with a charm and wryness that humanizes the character despite his shortcomings.  Elizabeth Marvel plays the anxiety riddled and introverted Jean with an unbreaking deadpan that leads to both the films most hilarious and most gut wrenching moments.  Jean’s chapter nearly broke me in its sincere look at how outsiders view mental anguish and depression.  And Emma Thompson delivers a remarkably balanced performance as the alcoholic, hippy fourth wife of Harold that borders on both comic relief and somber without ever slipping into self-parody.

The real showstoppers, however, are Adam Sandler and Ben Stiller as Danny and Matthew, respectively.  Once genuinely talented comedic actors 1, both Stiller and Sandler have been mired in mediocrity for over a decade, rarely showing anything resembling their peaks.  Sandler has been stuck in a rut making fatty-fall-down, fart joke, lowest common denominator comedy for years and Stiller has attached himself to unfunny comedies and middling dramas to the point where one questions why they were ever popular in the first place.

But, as I mentioned, these are two legitimate talents and, rather than subvert the performances each have given the past few years, Baumbach fully embraces their current normals to tremendous effect.  Sandler screams and sings and does silly voices, but rather than just being goofy they’re honest affectations of a man wrestling with being a soon-to-be divorced husband and a stay-at-home father of a daughter going off to college; this is all on top of a crushing belief that he’s a disappointment to his artistic father because of Danny’s failed career as a musician.  Stiller’s Matthew, on the other hand, struggles with accepting that while he is his father’s preferred child, there’s a sense of frustration that his father doesn’t approve of his choice of becoming an accountant monetary security over carrying on the family’s artistic endeavors.  Matthew is played with a nebbish insecurity that leans into Stiller’s recently developed schtick as a down on his luck loser with a heart of gold.  Both actors are anchored by a deeply affecting script that brings a depth to these actors typically trite portrayals.

While those averse to Baumbach’s myopic lens on artistic and familial drama will likely still find themselves wanting, what he reaches for here is something much more loving and empathetic than ever before.  His use of a five act structure and chapter headings give The Meyerowitz Stories an almost theatrical quality, but Baumbach also makes use of some subtle and clever filmmaking tricks.  While early scenes are angry and harsh, utilizing hard cuts mid argument to great effect, the film eventually shifts to a softer, more personally touching framing and letting conversations reach their proper conclusions and employing softer editing flourishes.

The Meyerowitz Stories is, without a doubt, the best film everyone involved has done in a very long time.  While I rolled my eyes at first when the characters and plot began to reveal itself, I found Danny, Jean, and Matthew’s stories touching and earnest and Baumbach’s newly developed sensitivity downright refreshing.  It’s not a film that will work for everyone, but The Meyerowitz Stories is Baumbach’s best in over a decade and maybe the best Stiller and Sandler have ever been.

Review: WHEELMAN Previous
My Favorite Movie: THE PRINCESS BRIDE with Zach Luna Next