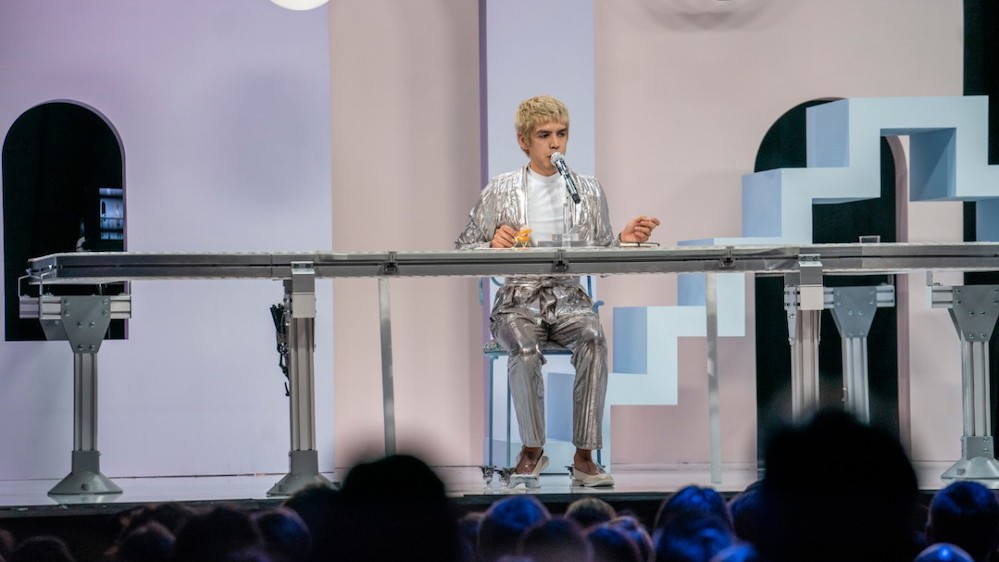 2019 is the Year of Julio Torres. The 32-year-old comedian has two bona fide hits on his hands, on top of another season of Saturday Night Live, where he’s a writer. In June, he, Ana Fabrega, and Fred Armisen debuted Los Espookys, a spectacularly hilarious show on HBO about a group of friends who love horror and start a business staging spooky scenes in Latin America. Torres is also a writer, showrunner, and actor on the show, playing an heir to a chocolate fortune. Now comes My Favorite Shapes, Torres’s comedy special, also on HBO.

Torres is a relatively fresh face to comedy. He arrived in the United States from El Salvador more than a decade ago to go to college, knowing he wanted to write comedy and do some stand-up. He only joined SNL in 2016 but has proved to be such a distinct voice that you pretty much know right away when a sketch is his. Possibly the most famous of his sketches is Papyrus, wherein Ryan Gosling spends every moment of his life obsessing over the oft-lampooned font used for James Cameron’s Avatar movies.

Every day I wake up and remember that Avatar, a huge international blockbuster, used Papyrus font for their logo and no one stopped them.

With My Favorite Shapes he takes his comedic observations and turns them inward, presenting objects to the audience by using a custom-made conveyor belt he activates with a foot pedal to bring the objects to him. The set behind him is bright, pastel, and shiny, matching its presenter. Torres is clad in a silver and crinkly outfit, his hair dyed blonde, and his hands and face sprinkled liberally with glitter.

One of these objects showcases perfectly the type of comedy Torres has created. He presents a cactus in a small glass vessel. As he explains:

“This is me…coming in late to a meeting….” He quickly opens the glass lid “…and immediately chiming in.”

The heart of why this bit is so funny and in why My Favorite Shapes is so funny, is that Torres creates an inner life for each shape. I imagined that the vessel represented Torres and the cactus represented a prickly and loud comment, as cactuses are notoriously dramatic with their pointy ends and bulbous shapes. Do any of these interpretations matter, or do we simply appreciate the story as it unfolds?

As it turns out, the cactus is quite extra, as the kids say, and the interpretations are sort of the point. Torres has carefully chosen each shape for its significance to his life and his world and for their comedic value, and the absurd stories that go along with each shape begs us to reach into our own imaginations as well. He helps convey this by adding video vignettes featuring his shapes narrating their inner thoughts, voiced by some very well-known stars (spoiler alert: Lin-Manuel Miranda is the cactus). Sometimes these vignettes are personal, others are more broad. Each is unique and quintessentially Torres.

That’s not to say that My Favorite Shapes isn’t conventional in some ways; it’s just that the conventional is typically where other comedians begin and end. For Torres, conventional is a platform for taking a joke elsewhere. For example, a bit about going to Disney World as a child to meet Daisy Duck goes from a simple observation about the loss of childhood innocence to Torres explaining how there should always be “beautiful things just out of reach” for children. Before it gets too poignant, he throws in the perspective of an adult being offended at a world where things are presented and taken at face value.

That’s what seems to be at the core of Torres’s entire ethos, actually. Whether it’s comedy or art or politics, things being presented and accepted at face value (he says in the special that he dislikes the phrase, “it is what it is”) means that no one can imbue any shapes or ideas with imagination. They see the limits and can’t imagine going past them. So the purpose of comedy for Torres and what it should be for us, too, is to break out and embrace the weirdness of everyday things.

In a moment of political observation, Torres says that this limited thinking is “what got that man elected.” It’s not the only bit; one of the sharpest criticisms comes during the introduction where Torres takes a seat on his pastel stage, leans into his shiny microphone, and asks if this is one of the jobs he’s stolen from a hardworking American. The joke is, obviously, that no one but Torres could have come up with something this specific but the acidity underneath the joke is a commentary on the current presidential administration’s vitriol toward Latinx people.

My Favorite Shapes is irreverent, colorful, absurdist, and quite delightful in how it pushes against our ideas of what comedy is. There are reviews out there (including mine) that call My Favorite Shapes a “comedy special” as if that term is remotely adequate to describe what it really is, which is a comedic contemporary art experience that requires the audience to approach it on its own special wavelength. We must adapt to these shapes, and not the other way around.

This may be a case where many people just won’t get it, and I won’t necessarily blame them. But if you’ve watched any other shows full of creeping weirdness and absurdity, even something more conventional like Key and Peele, you’ll probably see what My Favorite Shapes is trying to do. It’s trying to give us a little bit of imagination in a world that requires limits and rules to keep us in our place, and our guide is a 32-year-old immigrant from El Salvador who just got his green card and is remaking comedy in his own image. What could be more perfect?